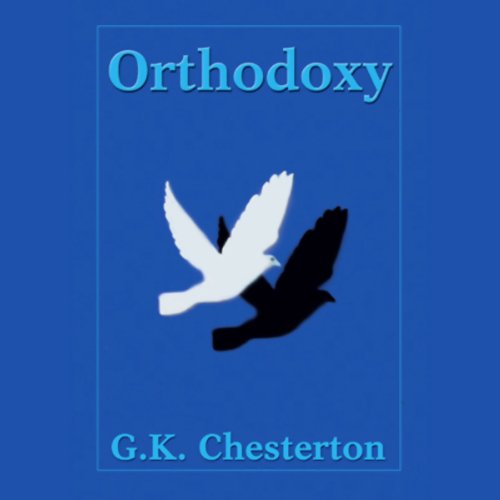 G. K. Chesterton was a journalist, playwright, poet, biographer, novelist, essayist, literary commentator, editor, orator, artist, and theologian. Orthodoxy is his great apologia for the Christian faith, which was prompted by a serious attack in 1903 against Christianity by well-known newspaper editor Robert Blatchford.

Published just five years later, Chesterson's famous reply took the form of an autobiographical account of his own indoctrination into the faith. Rather than attempt to explain how Christianity can be believed, he emphasizes what fulfillment in this life can come from believing. His argument is that people in Western society need a life of "practical romance, the combination of something that is strange with something that is secure. We need so to view the world as to combine an idea of wonder and an idea of welcome."

"[One of the 10] indispensable spiritual classics [of the past 1500 years]." (Publisher's Weekly)

I bought the book after listening to it from the library years ago. (The British accent of the narrator is great). Chesterton provides guidance for thought on a whole host of topics, and he states his case in a most enjoyable fashion. I appreciate his expressions and vocabulary as well. When I found this title on Audible I jumped at the chance to get it!

Chesterton at his best!

To find "Orthodoxy" here at Audible is a pleasant surprise! This is one of Chesterton's best works, along with "Everlasting Man". I've read "Orthodoxy" several times, and enjoy now being able to listen while exercising, working, etc. Thanks, Audible, for making it available!!!!

This really lays it out

The book is full of provoking thoughts, reason and good sense. We can find out a lot about ourselves if we listen and read it honestly

As always G.K Chesterton has wisdom to share in abundance, this novel is no exception. However, the monotone voice in which it is read aloud becomes very boring. Additionally, with all the insight this author brings to his subject, having the written work would better facilitate taking a second look at some of his more "heady" material. My advice is to get the book and read it.

What are you talking about?

I enjoy philosophy but this book just did not "ring my bell". Try Justice by Sandel if you want an interesting and relevant read.