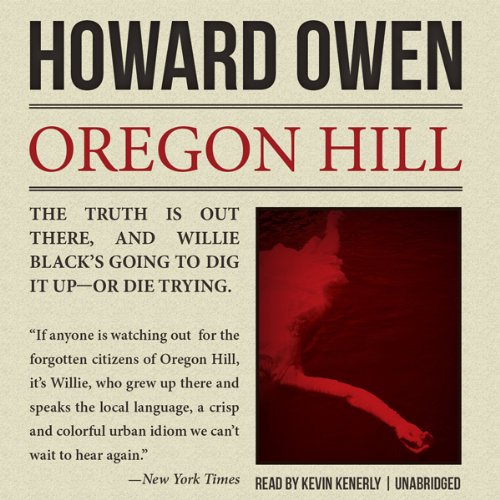 Willie Black is a newspaper reporter who has squandered a lot of things in his life - his liver, his lungs, a couple of former wives, and a floundering daughter can all attest to his abuse. He’s lucky to be employed, having managed to drink and smart-talk his way out of a nice, cushy job covering - and partying with - the politicians down at the capitol.

Now he’s back on the night cops' beat, right where he started when he came to work for the Richmond paper almost 30 years ago. The thing Willie’s always had going for him, though - all the way back to his hardscrabble days as a mixed-race kid on Oregon Hill, where white was the primary color and fighting was everyone’s favorite pastime - is grit. His mother, the drug-addled Peggy, gave him that if nothing else. He never backed down then, and he shows no signs of changing.

When a coed at the local university where Willie’s daughter is a perpetual student is murdered, her headless body found along the South Anna River, the hapless alleged killer is arrested within days. Everyone seems to think the case is closed. But Willie, against the orders and advice of his bosses at the paper, the police, and just about everyone else, doesn’t think the case is solved at all and embarks on a one-man crusade to do what he’s always done: Get the story.

On the way, Willie runs afoul of David Junior Shiflett, a nightmare from his youth who’s now a city cop, and awakens another dark force, one everyone thought disappeared long ago. And a score born in the parking lot of an Oregon Hill beer joint 40 years ago will finally be settled.

The truth is out there, and Willie Black’s going to dig it up - or die trying.

Howard Owen is a novelist and journalist living in Fredericksburg, Virginia, where he and his wife, Karen, are editors for the Free Lance-Star. His novels include Littlejohn, Fat Lightning, Rock of Ages, and The Reckoning.

©2012 Howard Owen (P)2012 Blackstone
"If anyone is watching out for the forgotten citizens of Oregon Hill, it’s Willie, who grew up there and speaks the local language, a crisp and colorful urban idiom we can’t wait to hear again." ( The New York Times)
" Oregon Hill is a wondrous trip into the world of sarcastic newspaper reporters, bad cops, and murder most foul. Having worked as a newspaper reporter, Mr. Owen writes in a captivating voice, his acute observations granting authenticity to the bullet-speed pace of the story. Newspaperman Willie Black is masterfully created, ink and dark humor coursing through his hardboiled veins. It is hoped that this is the beginning of a series of books staring Willie and crew. Bring on the sequel!" ( New York Journal of Books)
" Oregon Hill could serve as a textbook for a sub-genre that might best be called Southern noir. It hits all the stations of the noir cross, but unlike a lot of noir, it empathizes with the suffering that a hard-boiled world inflicts. Owen doesn’t skimp on the hard-boiled stuff, though…Hard-boiled fans will enjoy Oregon Hill. It’s fast, surprisingly intricate, and often grim." ( Richmond Times-Dispatch

enjoy the details about Richmond

I live in Richmond. I actually live in the fan. So were you this book was extra fun for me because of all the references to local history and landmarks.

Enjoyed the story, the author's storytelling. will check out some of his other novels. Also just personally liked Richmond, VA location with ehich I am familiar.

I lived in Oregon Hill for 8 years

This entertaining mystery would have kept me listening even if I hadn't lived in Oregon Hill on Pine Street, and still do live in Richmond. (I have never met the author).

However, the narrator sounds more like North Carolina crossed with Hollywood (California, not the cemetery) than anyone who grew up in Oregon Hill. He also mispronounced our adjacent county Henrico. He said En-ree-co rather than Hen-RYE-co. With all the talent right here in Richmond, why wasn't someone used who would know what he was saying?

Clearly, what bothers me won't be a problem if you have not lived here, and even with my complaints, I have enjoyed this book, listening as close to straight through as possible - the true sign of an engaging story. The local details are perfect and I look forward to reading the next Willie Black book, Philadelphia Quarry.