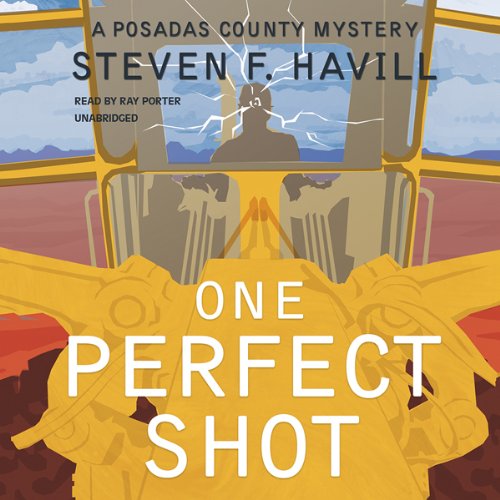 When a county employee is found shot to death in sun-drenched daylight while sitting in his county road grader, Undersheriff Bill Gastner is faced with puzzling questions. The simplest explanation - that an errant bullet from a careless target shooter’s rifle blew out Larry Zipoli’s brains - is soon discarded as inconsistencies surface. The fatal bullet shows no rifling marks, and investigation shows that the shooter walked directly toward the road grader, in full view of the victim - who did nothing to defend himself.

In addition to the demands of the investigation, Gastner learns that Sheriff Eduardo Salcido has hired a new deputy without discussing the matter with his undersheriff and that the new hire is destined to be the first female road-patrol deputy in the history of Posadas County.

Steven F. Havill is the author of more than twenty novels set in the American West. He taught in secondary schools for twenty-five years and recently earned an associate of applied science degree in gunsmithing. He lives with his wife, Kathleen, in New Mexico.

This story was a little slow to develop, but worth the effort. Ray Porter is a talented narrator and a great listen. I worry that the under sheriff sleeps too little and eats too many burritos. Love the setting in New Mexico.

If you could sum up One Perfect Shot in three words, what would they be?

What other book might you compare One Perfect Shot to and why?

I can't think of a book that this resembles.

Have read several books by this author and have loved them all. Fast moving entertaining and a delight. Was looking forward to listening and loved every minute.

What disappointed you about One Perfect Shot?

I kept waiting for something to break apart from a mundane investigation but that's all it was, mundane

Would you ever listen to anything by Steven F. Havill again?

I have listened to many audio books read by Ray Porter all of them wonderfully performed including this one. He was the only shinning moment of this book.

The proper Narrator was selected.

Enjoyable even if a little slow

This was a good book even though it bogged down with all the intricate gun info. I like the characters and especially Sheriff Gastner - makes me wish he would take care of himself.