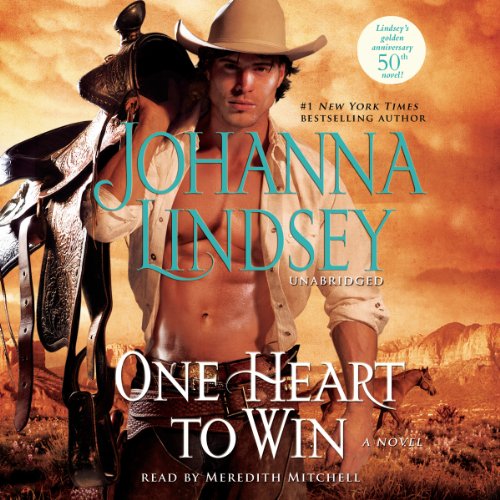 One Heart to Win

Johanna Lindsey, the number-one New York Times best-selling author, presents a passionate novel of hidden identities, family secrets, and love that transcends a 50-year feud set in the 1880s in the majestic ranchland of the Montana territory.

Some young ladies marry for money and social standing, a few lucky ones marry for love - but Tiffany Warren is marrying to end a feud. Honoring her mother’s promise, Tiffany reluctantly travels west to meet her estranged father and his enemy’s eldest son, rancher Hunter Callahan. Once the Warrens and the Callahans are united by marriage, both clans will stop squabbling over a disputed strip of land.

In the chaos of a train robbery Tiffany seizes a golden opportunity. By assuming the identity of her father’s new housekeeper she can live with the father she never knew and assess his true character, as well as that of the neighboring cowboy to whom she is betrothed. But, too late, Tiffany discovers that the rivalry between the Warrens and the Callahans has escalated when the Callahans steal the Warrens’ housekeeper as soon as she steps off the train!

Now, Tiffany, who is pretending to be Jennifer Fleming, finds herself living in the enemy camp, under the same roof as her fiancé. All too soon she learns her intended is a handsome, sweet-talking charmer whom she has to fight off because he can’t keep his eyes - or his hands - off Jennifer. After Tiffany’s charade is exposed she refuses to marry Hunter to end the feud. As Hunter goes about claiming his rightful bride-to-be, he knows that although he loves two women - proper, elegant Tiffany as well as spunky, passionate Jennifer - he has only one heart to win.

Love in the Wild West

I love this book. The sceeming throughout the story gives it life. It's almost like reading 4 books at once. You have 4 or more love stories happening at once, killings, train robberies, & kidnappings. You will love this book!!!!!!

Who wrote this story?

I refuse to believe Johanna Lindsey wrote this story. Johanna Lindsey typically does a great job with a plausible plot line as well as steamy romance scenes. With Tiffany and Hunter, I only got glimpses of the building of there romance. Hunter was a charmer, but I felt Tiffany was too childish and spoiled as a heroin. I tried to hang in there with her but she got on my last nerves. Her irrational loathing of her father coupled with her mother's inability to articulate why she divided the family left me dumbstruck.
Tiffany should have been upset with her mother for leaving her father rather than the reverse in my opinion. I also felt it was silly that she could not go and visit her father when her brothers were free to visit their mother at any time. If her mother was so sacrificing and loved Tiffany's father so much, why would she allow Tiffany to harbor such mistrust for him when she knew he was the innocent party and all of this.
The actions of the mother totally irritated me. I felt as if the whole premise of why she left her husband and son's was silly. this book had 54 chapters and honestly I feel as though it could have been condensed into 30. but It kept dragging on. It even had a last-minute kidnapping plot which I felt made this story unbearable. The only reason why I finished this story is so I could write this review because otherwise my time would have been spent in vain.
I listen to this story on Audible because it was included in the Romance package and I am a huge fan of Johanna Lindsey in fact, I have all of her old books in a chest because they are all my favorites even the ones that were only lackluster we're way better than this one. The scene in which Tiffany and Hunter first had sex was choppy at best. There was no mention of him even entering her he was just inside of her no going slowly because she was a virgin. No, giving her time to adjust to the feel and weight of him or anything. Everything was miraculous Sensations right off the bed. honestly, I rewound the same a few times just in case I had missed something. This was a story that I was half listening to at this point because it was so silly. But nope my ears had not failed me. There was no lead up just boom there it is. even the second time was written in a similar fashion. All of a sudden she knew just what to do even though it has only happened once. And this from someone who was supposedly very prim and proper. Do yourself a favor and skip this one. Take it from a Johanna Lindsey fan, this story will have you pulling your hair out in frustration.

I had a hard time connecting with this audiobook and it's a hard one for me to rate, because it had a cute storyline and could have been entertaining IF it didn't move so slowly. I had to stop listening to it several times, becoming irritated at it's slow pace. It seemed to take forever to reach the end of the book.

Meridith Mitchell performed well, yet did not pull me into the story, as some narrators have the ability to do... or maybe it was just the book.

My overall rating is less than satisfactory.

I love JL's books. Her skill of writing is amazing. Started reading her at the age of 13 and 17 years later, still perfect! This novel just reminds me why I love her stories so much! Listening to it just made my day! Her voice was wonderful portraying each character.

I read Johanna Lindsey when I was in my 20's, (I'm 36 now) all her books published in the 80's and 90's. I still re-read the Mallory series sometimes. I know writers change over time, but I'm so confused!

I picked up this book and a few of her newer millennium books, expecting to reconnect with an author I hadn't read in awhile. But this, I couldn't even finish it (or the other one, A Man to Call My own). Is it just that these were both westerns, where Lindsey's strengths are Regency or Highland? Or is it that with all the politically correct stuff of today, a strong woman can't have an equally strong man?

Her hero was wishy washy and boring. It seemed like he wasn't even in most of the book! The heroine spent most of the time complaining about her father! The story has been done before and trite. Hiding in disguise and pretending to be maid? Really? She just switched the genders. She had this premise in Man to Call My Own, where the male character was in disguise and pretended to be a stablehand. At least that one had humor!

The female character didn't feel strong or independent to me, she seemed spoiled and unwilling to face her problems. I expected better.

I think I'm over my Johanna Lindsey nostalgia kick.

not a bad read

not bad once you get into it. good for a holiday read but i wouldn't pay a lot for it.

I love this story. I wish there was more. I have been Johanna Lindsey fan since I was a teenager.

couldn't put this story down

loved the story. it had many twists and turns. great characters. I like the style.

You have got to be kidding me.... Really…… Johanna Lynsey how original, playing swticharoo with the maid (Then to make matters worse), in the house of the man you will marry. I paid for this drivel? I skimmed through about 19 chapters. 84 % of the book was about her deception. The book was good overall (if you like those kinds of childish games), but since it turned me off in the beginning I knew, that no matter how good the rest of the book, I would not enjoy it.

COWBOYS, FUEDS AND 2 LOVERS ON OPPOSITE SIDES

Johanna Lindsay is an auto download for me and she has branched out from her brilliant historical novels to delve into the world of the cowboys - with great success.

Spoilt, yet mentally tormented, Tiffany finally meets her betrothed a handsome cowboy named Hunter and the attraction begins but so too does a borrowed identity which leads to disaster in the kitchen, tears, frustration but there's a building romance that's unfortunately doomed before it ever begins.

Blink and you miss the sex bit but it's also filled with funny, sad, tender, romantic and joyous bits as slowly Tiffany learns that there's more to life than just table manners - as Hunter is all too keen to show her. Good supporting characters too make this an enjoyable listen as two feuding families finally share secrets, enemies are revealed and love does, eventually, conquer all.

Worth a credit? In my opinion anything J.L writes is a YES and this one is no exception.

Such sweet and innocent love story...I loved this one, a feel good one which I could listen repeatedly