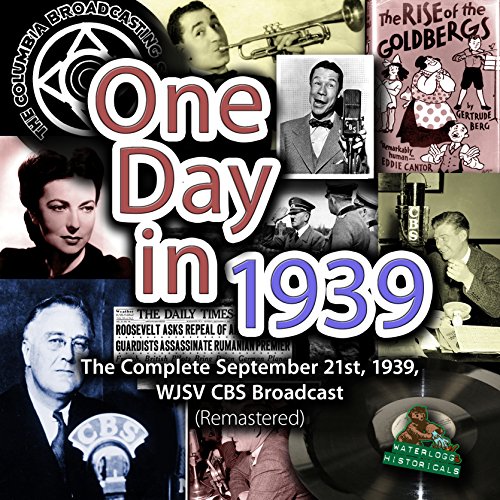 Arthur Godfrey, The Romance of Helen Trent, Our Gal Sunday, The Goldbergs, President Roosevelt's Address to Congress, Amos and Andy, Joe E. Brown, Major Bowes, Louis Prima, and more all in a row! This is a recording of a full broadcast day, remastered (from the National Archives transcript disks) by Joe Bevilacqua.

On Thursday, September 21, 1939, radio station WJSV (CBS) in Washington, DC, recorded their entire broadcast day - from sign on to sign off. This was before the advent of magnetic recording tape, so transcription disks were used. The overall quality of these disk recordings is good to excellent except for a few spots of noticeable distortion and dropout.

This collection is the complete broadcast day of the Columbia Broadcasting System's radio station WJSV AM, Washington, DC, September, 21, 1939, recorded in part because of President Franklin D. Roosevelt's address to Congress. This 25th special session speech covered FDR's plans to change existing neutrality laws in light of the coming European war. You will hear everything as it was the day it was recorded - that includes the pops and crackles, the station breaks, and the technical difficulties, along with all the music, comedy, drama, soap operas, a quiz show, war news, baseball, and advertisements that were aired on September 21, 1939.

Let this One Day in 1939 be your personal time machine as you travel back to those days when 15 cents would buy a hamburger, a six-pack of Coke cost a quarter, and the future was on display at the 1939 New York World's Fair.

More details: WJSV originally came on the air in 1926 as WTRC in Brooklyn, New York, then was moved to Arlington, Virginia, the following year and became WJSV in 1928. CBS bought the station from the previous owner in 1931 and officially moved the station to Washington, DC, although the transmitter site remained in Virginia. CBS made WJSV its affiliate in the nation's capital.

Among the more famous events involving WJSV was the recording of its entire broadcast day on September 21, 1939. The recording includes many famous radio programs of the time (including Amos 'n' Andy and Major Bowes' Original Amateur Hour), local programs featuring Arthur Godfrey and John Charles Daly before their national successes, a Cleveland Indians-Washington Senators baseball game, and a speech by President Franklin Roosevelt. The recording was saved in the National Archives.

Great glimpse back to life 80 years ago

This is a really unique recording of EVERYTHING broadcasted on 21 Sept. 1939 on the local CBS station in Washington D.C. It starts at 6 a.m. and continues throughout the day as if you had just left the radio on the whole time. The morning starts with pre-recorded music and what today we would call a DJ (disc jockey) interspersing the time, local news and weather, commercials, and hellos to locals who are celebrating birthdays and anniversaries. You soon learn that the more things change, the more they stay the same: lots of ad-libbing and trying to be witty early in the morning wasn't any easier 80 years ago. There are the nationwide official CBS news breaks, soap operas, more music, and shows. A bit of a downside/ warning (though it isn't the fault of this audiobook recording): the announcer doesn't always identify the songs that are played, and Shazam! only works on recordings in its system. This means of it was a live performance, or not the recording in the Shazam! archive you may be out of luck. With popular singers you can look it up with the lyrics, but alas - the instrumental pieces... As a history nerd with a special affection for 1930s and '40s, I am delighted to find this "audiobook", as it is a great primary source. It is 3 weeks into the start of World War II, and though America isn't" in it" yet, there is a bit of patriotic propaganda mixed in with the prewar innocence/naive. You are heading the news as our families heard it - not through the filter of all the things we learned later on. Particularly sad was hearing about things you know are not going to have a good outcome. (Romania expelling "the undersireables" a.k.a. Jews) But there were happy glimpses at life, too. Like during the morning when the DJ is calling out birthday greetings, and he tells a child to "look behind the radio for a special something". All in all, very much worth my monthly credit!

Charming step back in time