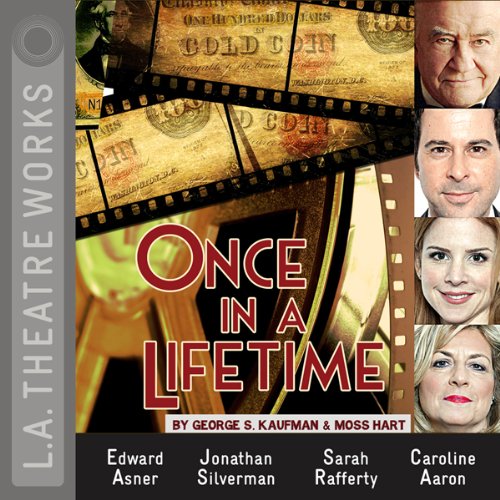 Once in a Lifetime

It’s 1929 as The Jazz Singer hits the silver screen and the talkies promise to change movies forever. Enter three down-and-out vaudevillians who hatch a hare-brained scheme to “make it big” in Tinsel Town. Their plan? To open a voice academy for the witless stars of silent movies. The only things standing in their way are ditzy starlets and power-hungry movie moguls.

Starring Ed Asner and directed by Moss Hart’s son, this is top-of-the-bill screwball comedy and Kaufman and Hart genius at its very best.

George S. Kaufman and Moss Hart’s riotous 1930 farce, Once in a Lifetime, concerns a trio of fading, and often bumbling, New York City vaudeville actors who suddenly find themselves behind the times with the advent of the motion picture industry. The team decides to head to California where the action is. There, things go wonderfully wrong and hilarity ensues.

This dramatized performance in front of a live audience features the mighty Ed Asner of The Mary Tyler Moore Show fame, and veteran film and stage actors Jonathan Silverman and Caroline Aaron.

Cosa pensano gli ascoltatori di Once in a Lifetime