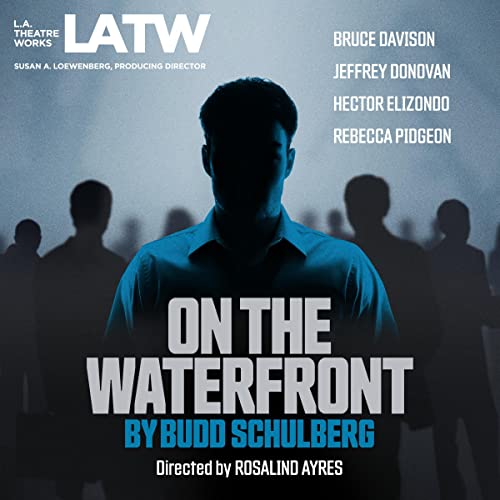 Terry Malloy, the “seemingly soulless street survivor,” unwittingly lures a rebellious longshoreman to his death in Budd Schulberg’s searing drama about the New York waterfront, the racketeering unions controlling it, and the kid who “could’a been a contender.”

Recorded before a live audience at the Skirball Cultural Center, Los Angeles, in December 2002.

The 1954 film about conscience and courage in corrupt labor unions has deservedly attained mythic status, but it is to the credit of this fine production that eventually one begins to think less of the classic movie and to become quite absorbed in this adaptation. The strongest performances are those by Bruce Davison (as the priest), whose thrilling dockside sermon brings applause from the audience; Rebecca Pidgeon, who emphasizes Edie Doyle's intelligence as much as her vulnerability; and Hector Elizondo, who makes racketeer Johnny Friendly into a believable and lethal thug. Jeffrey Donovan plays Terry Malloy, the ex-prize-fighter in love with Edie. He is at his best in Terry's later scenes of conviction. The sound effects are rich and evocative.

"It is to the credit of this fine production that eventually one begins to think less of the classic movie and to become quite absorbed in this adaptation...The sound effects are rich and evocative." (AudioFile)

An Excellent Production of The Play, Some Change from The Original

This audiobook is a production of the play from the 1950s. It is set in the 1950s in New York as was the original play. There are numerous changes although the story is recognizable.

The acting is very good. There is intensity at times. “Terry”, the ex boxer was excellent and did sound like Marlin Brando to me. That my or may not be desirable, depending on your viewpoint. As for me, I enjoyed it.

I have the original screen play and intend to study it further and also rewatch the movie which I have seen in the past. I am glad that I listened to this play and would watch it if I ever have the chance.

The performance keeps the listener engaged in the storyline. Very easy to listen in one session.