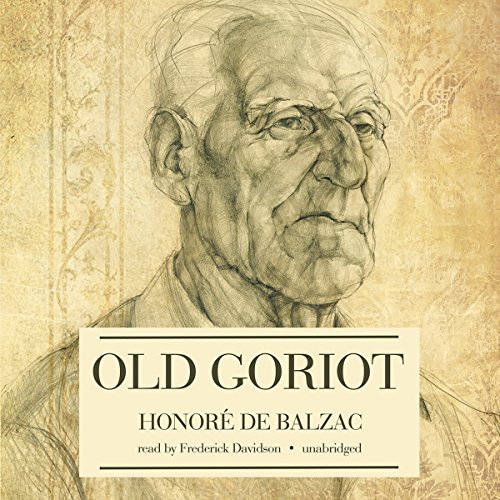 Balzac’s universally loved novel explores the great theme of money and its effect on the human character. Old Goriot is a lodger at Madame Vauquer’s Parisian boarding house. At first, his wealth inspires respect, but as his circumstances are reduced, he is gradually shunned. He moves into smaller and less desirable rooms in the house, and soon his only remaining visitors are two beautiful young women. The mystery as to who they are and what is happening to Goriot’s fortune involves several other boarders, including Rastignac, an ambitious youth who hopes to rise in society.

With its complicities and alliances, mysteries and betrayals, passions and ambitions, the house becomes a microcosm of the grasping Parisian society of the 1820s - a perfect setting for Balzac’s masterful portrayal of La Comédie humaine, the whole comedic parade of human life.

HONORÉ DE BALZAC (1799–1850), was born in Tours, France, educated at the Collège de Vendôme, and studied law at the Sorbonne. His father wished him to become a lawyer, but he left Tours in 1819 to seek his fortune as an author in Paris. He wrote eighty-five novels in twenty years, but his life was one of frequent privation. In 1850, he married Madame Hanska, a rich Polish lady with whom he had corresponded for more than fifteen years but had only just met in person. Five months later, Balzac died in Paris.

Public Domain (P)1999 Blackstone Audio, Inc.
Classici Narrativa letteraria
Mostra di più Mostra meno
“[A] meticulously observed story of love and greed…Reminiscent of King Lear, it also resonates today with the clarity of the poet’s barbed pen…Frederick Davidson is brilliant, deadening his voice for the dreadful daughters and their ghastly husbands, as well as portraying each ridiculous tenant in the boardinghouse…But it is Goriot’s deathbed scene that causes the hairs to rise on the backs of listeners’ neck. Listeners…cannot remain unmoved.” ( AudioFile)

I can't tell you anything about this story, because about five minutes in, I refused to listen any further. This narrator sounds like the biggest pr-ck in the world: super smarmy, full of himself, with an irritating inflection pattern. I didn't want my introduction to Balzac to be colored by so terrible a narrator. If I could return this, I would since I know with certainty that I won't be listening to it any more than the very little I have already. Don't waste your money.

Where does Old Goriot rank among all the audiobooks you’ve listened to so far?

One of top classics

Which character – as performed by Frederick Davidson – was your favorite?

no, too dense for that

Some of the book is missing

Recording skips several passages - some of which are important to the books flow. I’d suggest listening to another version.

the sound skips frequently. It's annoying.

the sound skips frequently. it's distracting. the story is excellent. I love this author. overall it is a good experience

The narrator affects an insufferable archness in his diction. He pounds te first syllable of every word, but all following sullables drift off into faint inaudible obscurity. I should get a refund for this execrable production.

Decent tale told by Mr. Davidson. A bit dense at beginning and introduction of characters, but those who can make it through may enjoy a grand reward.

Can anyone tell me who translated this particular version? With the narration the quality that it is, it would help to be able to read along

This recording has many skips

this audio file was apparently digitized from an old tape cassette and when it gets to the end of a reel there is distortion and skips. it happens several times and is disturbing.

Great story and the narrator performed well, but the recording itself skipped very often even though the progress bar and timer didn't show any abnormalities

I wish I had read the review regarding the irritating French pronunciation before I wasted a credit on it.

Would you try another book written by Honoré de Balzac or narrated by Frederick Davidson?

What could Honoré de Balzac have done to make this a more enjoyable book for you?

Another narrator - possibly somebody who understands French - would be a god start!

I found it quite impossible to listen to this book!

I require a refund, please!

erformance is so awful

performance is the worst i have ever experienced. i read the book, but i could not listen to it. i wish i could give minus stars. awful.

sound quality kept fading away. depressing story. interesting characters. glad I read it but glad it's over

Try to find a different version of this book. This version is well read but sounds like an old audio cassette that had been played too much and kept in the sun for too long.