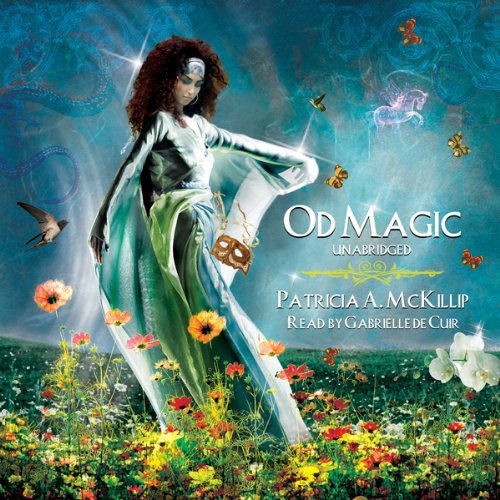 Brenden Vetch has a gift. With an innate sense he cannot explain to himself or describe to others, he is able to connect to the agricultural world, nurturing gardens to flourish and instinctively knowing the healing properties each plant and herb has to offer. But Brenden's gift isolates him from people and from becoming part of a community - until the day he receives a personal invitation from the Wizard Od. She needs a gardener for her school in the great city of Kelior, where every potential wizard must be trained to serve the Kingdom of Numis. For decades the rulers of Numis have controlled the school, believing they can contain the power within it, and have punished any wizard who dares defy the law. But unknown to the reigning monarchy is the power possessed by the school's new gardener, a power that even Brenden isn't fully aware of, and which is the true reason Od recruited him.
©2005 Patricia A. McKillip (P)2009 Blackstone Audio, Inc.

"With lyrical prose, well-limned characterizations, vibrant action, a sense of the wonder of magic, and a generous dollop of romance, this is a story that will bind readers in its spell." ( Booklist)
"World Fantasy Award-winner McKillip demonstrates once again her exquisite grasp of the fantasist's craft....[A]n otherworldly delight" ( Publishers Weekly)
"Lyrically told, the novel evokes an enchanting atmosphere and thoughtful tone...." ( KLIATT)

Great to have a McKillip, but not with this reader

Not the very best of McKillip's work but still with the odd, unexpected, quiet charm which distinguishes her prose, her characters, and her imagery from any other writer's, _Od Magic_ is a fine place for a publisher to start with recordings. The world is complex, the characters varied, the story not so intricate as to leave a listener stranded but a long way from simple.

But the reader. Gabrielle de Cuir has a sweet, breathless, girlish voice which embroiders on every hint of wonder until it loses all its interest. She doesn't have the range for the variety of characters she's posed, but more, she seems to take the delicacy and beauty of McKillip's prose as a mandate to make a sticky-sweet spun-sugar confection out of a story that truly has more grip to it than that. de Cuir should be set to reading cyberpunk or other dystopias, where the *italic* quality of her reading would provide a contrast, a surprise, a source of richness in the reading. To have her reading McKillip is to reinforce every stereotype there is of McKillip's flowery-ness, every stereotype formed by readers who don't pay attention to the real tensions and ambiguities laced - yes, delicately, but with great tensile strength - through the narratives. De Cuir reads _Od Magic_ exactly the way someone who didn't like the book would expect it to be read.

I've been a fierce fan of Patricia McKillip's works since 1981. When _Od Magic_ was published, I bought it and read it and liked it very much. Every month or so, I do a hitherto useless search for any of her books available through Audible. When I found one, I bought it. I downloaded it. I started it. I never finished. Now, when I do my searche for anything by McKillip, it's with both eagerness and dread: what if there is another one, one I like even more? But--what if it's read by de Cuir?

Od Magic is a very good story. It starts out slowly but builds to a rather exciting, fast paced, conclusion. I would recommend it to any fantasy fan.

This is an Audio Book and the narration leaves a lot to be desired. The colorless, sing song monotone voice that Gabrielle de Cuir uses for everything except character dialogue nearly destroys the listeners interest in continuing during the slower parts. I really don't understand what she was trying to do with that voice because she does absolutely outstanding character dialogues.

Since this is an Audio review, I have to give it 3 stars instead of 4. The narration is weak.

The king has a stranglehold on magic, and that's just part of the complex, exasperating problem that several stubborn characters are working on from different angles. While it's probably too subtle for little kids, and not for moods when the reader wants battles and smiting, the book brims with conflicts and dramatic and humorous moments. The magic is solidly convincing, the humor is woven into the situations, and the characters are well-drawn and memorable (though I can never remember any names but Od's). The narrative point of view moves among several important characters, but the reader handles the shifts so masterfully that the listener doesn't even blink. It's an excellent book to listen to; I hope Audible gets all the rest of McKillip's books soon, and that they're all this well-performed.

McKillip's imagery is rich and dense, and I enjoy the way she paints pictures with words, though I suspect the surrealism and dream-like quality of some scenes will wear on some people's patience. Unfortunately, the reader seems inspired by this aspect of the prose to read in a slow, sing-song voice like a bad actress playing a person under hypnosis.

As for the story, I thought it had potential, but it never seemed to grow complex. The characters didn't evolve enough, especially Brendan Vetch, who seemed originally meant as the protagonist, but seems the least interesting character by the end. We are presented with a supposedly dangerous mystery, and character conflicts, but just as everything is coming to a climax, Od, the ancient wizard who everyone respects and no one will defy, steps in and fixes everything like a teacher sorting out squabbling children.

If it weren't for the narrator, I'd say it was still worth a listen, so I recommend listening to the sample before buying.

I was not able to get more than an hour into this book. The cadence and tone of the narrator made it absolutely unbearable and I had to quit listening. story may be good, but I wouldn't know.

Od Magic starts out more like a panting with words than a book. The story progresses from its beginning into a fairly interesting story with well developed characters and an interesting setting. There are wonderful scenes of magic painted such that I'll always remember them. However, once we have the characters established and the setting painted, the story starts to drag for a little while.

The characters spend far too much time whining about their situations or running away from their problems and hiding or making half-hearted attempts to find other characters that are running away or hiding. While, in many ways, the actions of the characters are realistic within this fantasy realm, it doesn't make a very interesting story.

Anyway, the story improves every time there is a scene with a magical performance, or a character actually makes a choice and acts on it. The story picks up pace towards the end, and approaches a moment of truth that had me holding my breath. The characters come to the moment: the wizard seeking to maintain the king's rule over magic and the wizard wanting it to be free, the king and his daughter, simple and peaceful magics and laws based in fear. Then Od comes in as a sledgehammer of a Deus Ex Machina, each confrontation is interrupted, and Od takes away all the choices.

It would have been an amazing story if it had a different ending.

I think a lot of the story was ruined for me due to the narration. I didn't figure out it was slowed down until a third way through. Once you bump it to 1.25 she sounds normal. As for the story, I wanted more. More character development, more world building.

I ejoy character driven novels and this one was extremely entrtaining. Strong character development and intriguing well, intrigue. The only downfall was the ending, which felt a bit weak after all of the strong build up during the body of the story.

I listened to the book a while ago, but when i noticed I hadn't reviewed it, I was surprised. This was a very entertaining listen and I was swept away by the story. What is really interesting, is how it's stayed with me. I find myself looking again and again for a sequel. The reader was wonderful, too. I know I will listen again and again. Soon!

I really loved this book, it was wonderfully enchanting. This author is very descriptive and it isn't very difficult to picture exactly what she's describing. She also has very interesting and in depth characters without being to overwhelming. I also really liked the resolution at the end.

Beautiful, meandering, but not the best narration

Would you consider the audio edition of Od Magic to be better than the print version?

Quite the opposite, sadly.

A charming, meandering tale filled with surprisingly believable characters and beautiful prose, the effect is marred slightly by the breathy narration, which often ties itself up and confuses the mood of a scene or character, which has a rather jarring effect.
Indeed, on one notable occasion, the narrator confuses which characters are speaking, realises mid-speech and corrects herself. Not the best treatment, and rather suggests that the narrator wasn't given much (any?) direction, nor appropriate correction.

Fortunately, the quality of the writing; the wonderful characters; the meandering narrative; the charming, positive story all conspire to render the problems with the reading insignificant. This is a wonderful slice of fantasy, filled with humanity and livened up with a light dusting of myth and fairytale, and is more than worthy of anybody's shelf, virtual or otherwise.