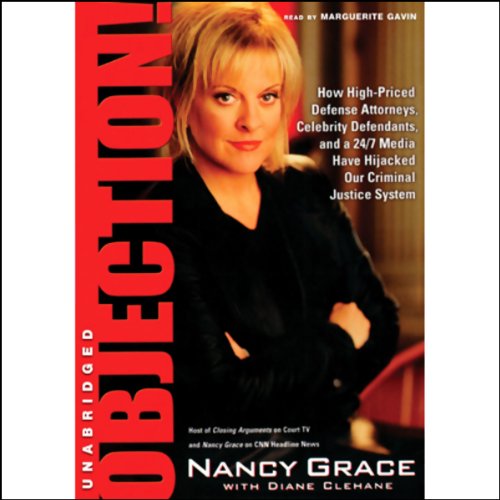 As host of Closing Arguments on Court TV and Nancy Grace on CNN Headline News, Nancy Grace has won legions of devoted fans with her intelligent, plainspoken approach to the law. A passionate advocate of victims' rights and outspoken critic of the often circus-like atmosphere surrounding high-profile cases, Grace addresses the critical issues at the heart of the criminal justice system.

In Objection!, she takes on a host of controversial topics, including the all-too-common "blame-the-victim" defense, the imperiled jury system, the inescapable effect of celebrity factor on trials, and the debate surrounding the death penalty. Grace also offers a fascinating behind-the-scenes look at some of the country's most explosive cases and trials, including those of Scott Peterson, Kobe Bryant, Robert Blake, Michael Jackson, and Martha Stewart.

"Nancy Grace is one of the most intriguing television personalities of this decade. There are no middle opinions. She is loved or hated....I disagree with her most of the time, but I love her all of the time." (Larry King)
"This is a great read for anyone who thinks the criminal justice system is broken. It is broken and should be called the criminal injustice system; and Nancy has some great solutions to fix it so that maybe, finally, victims will have a real voice." (John Walsh, host of America's Most Wanted)

I have always loved Nancy Grace, ever since I first saw her on Court TV with her spunky, opinionated, non-apologetic personality. Finally! A lawyer who stands up for everything that should be "righted" within the law! Her book is just as interesting as she is, talking about everything that is wrong with our so-called laws.

The theme of the book is "people who commit crimes are horrible!! The lawyers who represent those horrible people are filthy too, but sometimes very smart!! Watch out!!"
This is a book for people who would say something like "why on earth the mother visited her son in prison is beyond me - let him rot!". If you find that statement a bit callous and idiotic, or even slightly offensive to the human condition, then you might be disappointed with this book, as I was.
The author of this book sees the world as very black-and-white. Everyone is either good or evil, and anyone who has committed a crime is evil. What a boring and frustrating perspective. It's also unproductive in that it does nothing but stir emotions of condemnation. I'm ashamed to see that an attorney is capable of such mindless myopia.
I guess she knows what sells. She is a television personality, after all. Maybe it's my fault for expecting something thoughtful or original.

Great narration. Interesting and thought-provoking. Nancy Grace has a fascinating personal story that explains her motivation for her life's work. She has a unique perspective and fresh information on victim's rights and on many famous cases.