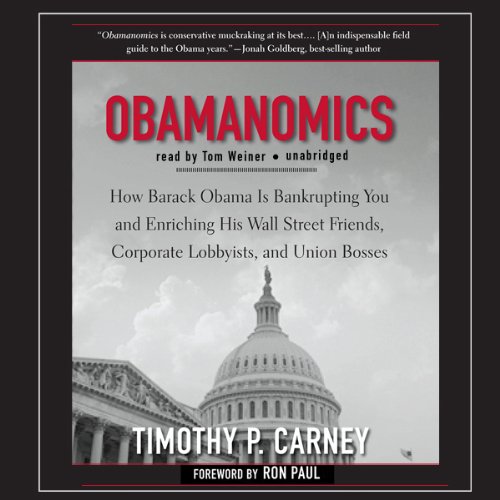 How Barack Obama Is Bankrupting You and Enriching His Wall Street Friends, Corporate Lobbyists, and Union Bosses

Sweetheart deals for Wall Street, the nationalization of the automakers, global-warming regulations, and President Obama's unprecedented spending spree are an all-out assault on regular Americans' pocketbooks.

In Obamanomics, Timothy P. Carney shows how the economic corruption of President Obama's Washington is far beyond political business as usual. From a free-spending stimulus package that was a treasure trove for Obama-friendly corporate interests and lobbyists, to the revolving door between Wall Street and the Obama administration, to putting the unions in the driver's seat of GM and Chrysler, Obamanomics tells it all. And the worst part is that the American taxpayers have to foot the bill - whether they like it and voted for it or not.

©2009 Timothy P. Carney (P)2009 Blackstone Audio, Inc.
"Every libertarian and free-market conservative who still believes that large corporations are trusted allies in the battle for economic liberty needs to read this book, as does every well-meaning liberal who believes that expansions of the welfare-regulatory state are done to benefit the common people." (Congressman Ron Paul)