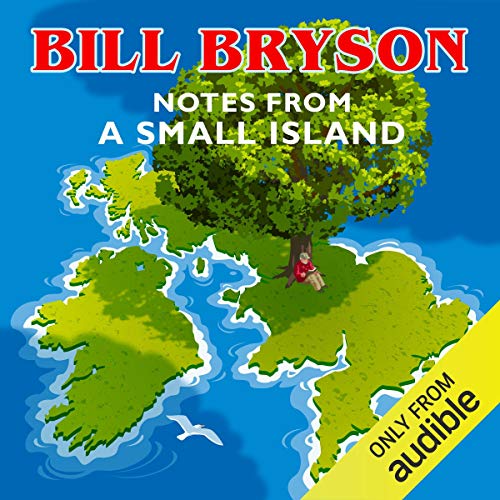 Notes From a Small Island

After nearly two decades in Britain, Bill Bryson, the acclaimed author of such best sellers as The Mother Tongue and Made in America, decided it was time to move back to the United States for a while. This was partly to let his wife and kids experience life in Bryson's homeland, and partly because he had read that 3.7 million Americans believed that they had been abducted by aliens at one time or another. It was thus clear to him that his people needed him. But before leaving his much-loved home in North Yorkshire, Bryson insisted on taking one last trip around Britain, a sort of valedictory tour of the green and kindly island that had so long been his home. His aim was to take stock of modern-day Britain, and to analyze what he loved so much about a country that had produced Marmite, zebra crossings, and place names like Farleigh Wallop, Titsey, and Shellow Bowells. With wit and irreverence, Bill Bryson presents the ludicrous and the endearing in equal measure. The result is a social commentary that conveys the true glory of Britain.

I've been a Bill Bryson fan for years now, and as funny as his books are, listening to this one definitely made it even more enjoyable. It was a bit embarrassing when I kept bursting out laughing in public, but it's a very small price to pay for the great entertainment.

Bill at his Best

Would you consider the audio edition of Notes From a Small Island to be better than the print version?

Yes, in a book like this is better than printed.

What other book might you compare Notes From a Small Island to and why?

Well it has to be Down Under by Bill Bryson too. I am English by birth but now an Australian, I learned more about Australian history from Bill reading Down Under than others as he seems to pick those stories that is well, just darn more interesting. He does the same here about the English.

Cringe maybe, as I have memories like these myself. Cringe in a nice way Bill.

Enjoyable, if you grew up in England through the 70's and 80's a lot of this will hit home. But for anyone else, it is still a fun read/listen.

Probably not my favourite Bryson book but very good nonetheless. Narrator was perfect, I prefer him to Bryson's own narration. Very entertaining.

i love bill bryson books and this is one of his best. listen to them all

If you could sum up Notes From a Small Island in three words, what would they be?

What was one of the most memorable moments of Notes From a Small Island?

The whole book is a pearl necklace of memorable moments!

What does William Roberts bring to the story that you wouldn’t experience if you just read the book?

William Roberts is the perfect narrator! Mr. Roberts - if you read these reviews - THANK YOU!

A Note From A Small Islander

I love Bill Bryson's book and this is, by far, my favourite.

It's a while since I heard this originally broadcast on Radio 4 and I'd forgotten how much better it is as a native Brit to hear it read in an american accent as it makes Bryson's journey and experiences more charming and entertaining.

I thoroughly recommend this, even for diehard fans of the book - it gives it a whole new perspective!

Bryson at his best...

I could listen to Bill Bryson's books forever. The detail, humour and wit is first class, and I often find myself laughing out loud at his superb ability to jovially describe various situations.
This is a fun, interesting jaunt around the UK. Okay, he misses out large parts of the country, but the general overview from the eyes of an American is good fun.
A really fun, easy listen. Recommended.

On the whole, I really enjoy Bill Bryson's books, and I find William Roberts to be a capable and amusing narrator. I found Notes From A Small Island, however, to be a rather different sort of book.

Aside from obvious but unavoidable issues that Bryson skims over or misses out rather large areas of the country (e.g. the Midlands, Wales...), I found that another aspect of this book bothered me more. While Bryson does spend a small amount of time making his trademark witty observations of local culture, architecture, attitudes etc., I found him to spend rather too long on brash tirades in this work. His reporting of encounters with unsuspecting members of the public in which he verbally assaults them with little provocation implies that he takes some pride from this sort of interaction. This is not only unpleasant for the reader/listener but must have been most unpleasant for the individuals involved.

I found some parts of this book uncomfortable and others rather irritating. A shame since I've had plenty of fun from his other works.

Notes from a small Island

Not one of his better books.
Rather tedious and patronising in many places and the targets are rather cliched and obvious.

This book is another good Bryson. A well narrated farewell tour of Britain in Bryson's usual style. It's lovely to hear of his descriptions and experiences of familiar places to me. It's a good book but not his best, rather too much description of his train journey, but I guess that's inevitable given his mode of transport for the trip, and not quite as funny as other books of his that I've listened to. Still worth reading/listening to though.

If the town you live in is featured in this book Bryson is not likely to leave you with a feel good factor of your home. Though this book is typically Bryson with the genuinely funny moments you'd expect, as the book goes on it does seem to cross over in to a bit of a moan about anything and everything. Gets to the point where it becomes a little energy sapping. Though it's Bryson's style so I'm still a fan. What was unforgivable and the knocked off a star, were the factually incorrect parts that for such a smart man were enough to rock confidence in his travel accounts and revealed a previously unseen sloppiness in his writing. For instance, asserting Glasgow as the capital of Scotland was just one that stood out.

May be enjoyable if aimlessly wandering around Bristish shopping centres and trying to save money on guesthouse accommodation, in the company of a smart-arse, is your thing. Cultural references have all dated badly. Gave up with three hours to go.

I do not normally read travel books, but this one is great! It gives a good, honest description of places that the author visited. It is also easy to listen to and very funny.

I love Bill Bryson's books, and I particularly love them read by William Roberts, whose voice and interpretation are perfect. This was no exception. 5 star!

Many years since I read this book, but it is still terrific and the narration was perfect. It may be some time since Bill went round Britain, but it really could have been written last week!