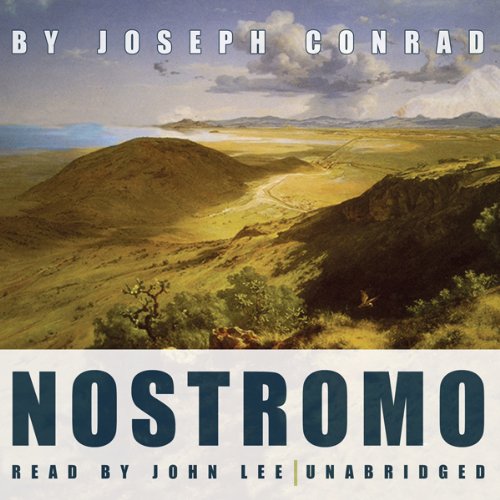 Joseph Conrad’s multilayered masterpiece tells of one nation's violent revolution and one hero's moral degeneration. Conrad convincingly invents an entire country, Costaguana, and sets it afire as warlords compete for power and a fortune in silver.

Señor Gould, adamant that his silver should not become spoil for his enemies, entrusts it to his faithful longshoreman, Nostromo, a local hero of sorts whom Señor Gould believes to be incorruptible. Nostromo accepts the mission as an opportunity to increase his own fame. But when his exploit fails to win him the rewards he had hoped for, he is consumed by a corrupting resentment.

Nostromo, relevant both as literature and as a brilliant social study, ambitiously brings to life Latin American history and the politics of an underdeveloped country.

"I'd rather have written Conrad's Nostromo than any other novel." (F. Scott Fitzgerald)

One thinks of Heart of Darkness and even perhaps of Lord Jim when one thinks of Conrad (IF one even thinks of Conrad, let's just be honest). Nostromo, however, is an almost perfect novel: complex narrative, compelling characters, writing that makes the biblical J-writer feel she could have done better with her story. I can't think of but a handful of writers (Dostoevsky, Kafka, McCarthy, Melville) who have written a better book.

Must Read for Conrad Fans

This is a very good book that marked a monumental change in literature, but I did not find it a must read. Nostromo represents one of the earliest modernist novels. One feature of this is the entire plot and most character development could be summed up in a single big paragraph, but the novel is nearly 500 pages. The novel is not complex in plot or character, but in the unusual and complex narrative mechanics including vague and sometimes self contradictory inner processes of characters. It has been said that Nostromo can't be read, unless you have read it before. This is not true, but has quite a bit of truth in it.

One of the key underpinnings in Nostromo (and all of Conrad I have read) is that traditional history, the influence of God, and the belief in real human progress can no longer be taken seriously. In the early 1900's this was ground-breaking in a novel form, but has become quite run-of-the-mill. I would not recommend this to most readers, unless they love Conrad or are interested in the historical roots of literary modernism. Read Heart of Darkness, if you love it, do Lord Jim, if you love that, you will likely appreciate Nostromo.

The narration was good and consistent, but a little slow and monotone for my taste.

John lee is the best narrator for this novel, especially after listening to him narrate one hundred years of solitude. Story is a true political masterpiece. Quality of audio was a bit spotty at times which is why I didn't give it perfect score.

Joseph Conrad had the potential to write a great story and, based upon his introduction it had all the hallmarks of being tremendously exciting.

And yet... it never really delivered.

Set in a fictional South American country generally believed to be a sheer veneer for Colombia in the turn of the century, the story pits nationalist versus peasants fighting over a national generally controlled by foreign business interests.

Nostromo is the lead character, a romantic and swarthy Italian who is the boss of the immigrants who load the boats that transport the ingots from the American owned silver mine. Dashing, with a swagger women love and men envy, Nostromo had emigrated from Italy after having served in the great patriotic war of Italy under Giuseppe Garibaldi and was feted among his expatriate countrymen who did so much of the specialized labor in the fledgling country.

While the warring factions mutually despised the foreign interests that control the wealth of the country, Nostromo is ultimately loyal to the Goulds, particularly Mrs. Gould who was an iconic English woman who entered the hinterland with her husband to hack out a fortune in silver. Nostromo is lured into a plan to assure the silver isn't used as a tool for the warring factions that changes the trajectory of his life.

The story had such great potential. But I don't feel it delivered as Conrad intended. Still, I am glad I was encouraged to read it as it was 47th on the Modern Library's Top 100 Novels of the 20th Century. I'll give it a try again down the road.

Typical Conrad in that he made you think about what is the overarching moral to the story. More modern in his styling as he jumped around quite a bit chronologically- at first a bit confusing but second time through made much more sense.

There are dozens and dozens of places where the volume level and character of the audio changes, as if they were punching together separate takes, rather than re-recording where errors arose. It’s disorienting and unprofessional.

Conrad’s brilliant novel, his very best, entranced me from beginning to end. This was my second reading of the book, and I found it as powerful as ever. The characters are beautifully drawn, the setting is sinister and magnificent. The novels reader did a very good job with It, rendering it dramatically, slowly, and eloquently.

A magnificent epic, and John Lee does it fitting service with his heroic delivery. Conrad's vision gets to the heart of the compact between old world and new, drawing out the human tragedies it entailed. Nostromo is a true hero, masterful and flawed, dominating a supporting cast assembled around him - the tunnel-visioned Charles Gould, the cynical wordsmith de Coud, the fallen but hopeful Dr Monaghan, and above all the implacable veteran revolutionary Viola, as remote and ageless as the presiding Mount Higuerota. A narrative in ceaseless motion that resonates as truly today as a century ago, it holds the attention and challenges the recall to its limits. Enjoy the hero's journey.

At times a good book can fall flat due to poor narration. This listen was my first experience of excellent narration of a story with little purpose. In Nostromo, Conrad seems to have spent too much time on language and not enough time on storytelling.

Conrad is one of the best early 20th-century mood-setters and John Lees reading is deep and dramatic with lots of good accents thrown in. But every 10 minutes or so the recording is damaged, as if Lees voice drops out. This is a great story and a great recording but a flawed product. I only keep it because I like the reading so much, but shame on Audible if they leave this in the shop and do not try to get a better copy. Steer clear of it until they do.

Fine Recording of a Classic

Nostromo needs no recommendation, it’s a classic that speaks for itself. John Lee is a fine narrator and he does the text full justice. (I liked this reading better than the somewhat strained Naxos recording.)

Another review comments on the recording quality, observing that the sound dips in and out. It’s true that every few minutes it sounds as if the narrator has half a jam jar over his mouth for a few words; but they’re still perfectly clear, and I didn’t find that it affected my enjoyment of the reading at all.

There are wonderful passages but something about the narration made it really difficult to follow the plot. It seemed as though the reader was just rattling through without being aware of the story either. His voice was fine but there wasn't enough intelligence to bring it together.