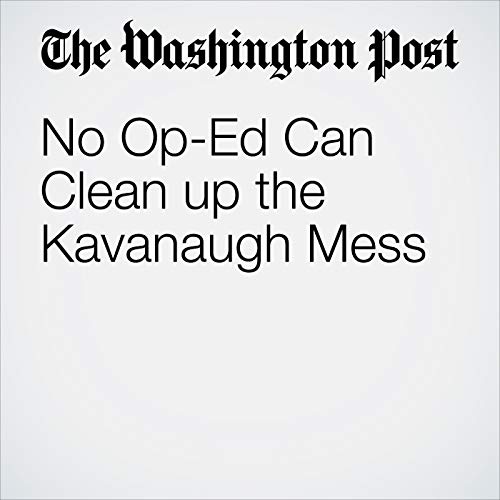 Republicans insist that the “left” (nefarious, unidentified, omnipotent) would have gone after any Supreme Court nominee whom President Trump sent to the Senate. Well, the left wasn’t thrilled that Senate Majority Leader Mitch McConnell (R-Ky.) decided to turn the high court into another tribal battlefield — first in denying Judge Merrick Garland a hearing in 2016, and then by ending the filibuster — but no one raised any hint of ethical, temperamental or criminal wrongdoing when Neil M. Gorsuch came up for a vote. Yes, he was a staunch conservative (as was Antonin Scalia), unlikely to color outside the lines of conservative jurisprudence, but he was restrained, respectful and apolitical. (One can be conservative in judicial philosophy and not be a rabid partisan.)

"No Op-Ed Can Clean up the Kavanaugh Mess" is from the October 05, 2018 Opinion section of The Washington Post. It was written by Jennifer Rubin and narrated by Jenny Hoops.