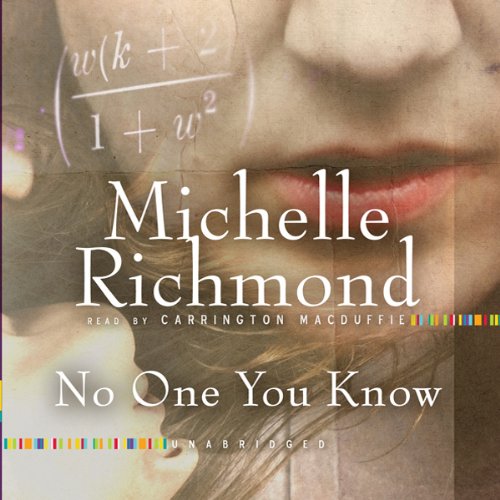 Twenty years ago, Ellie Enderlin's sister, Lila, a brilliant mathematician, was murdered in a crime that was never solved. In the aftermath of her sister's death, Ellie entrusted her most intimate feelings to a man who turned the story into a best-selling true crime book - a book that both devastated her family and identified one of Lila's professors as the killer.

Decades later, Ellie receives a piece of evidence never found with her sister's body: Lila's notebook, filled with mathematical formulas. It will lead her to a hundred-year-old mathematical puzzle, to a lover no one knew Lila had, to the motives and fate of the man who profited from their family's anguish...and to the deepest secrets even sisters keep from each other.

©2008 Michelle Richmond (P)2008 Blackstone Audio, Inc.
"As complex and beautiful as a mathematical proof, this gripping, thought-provoking novel will keep you thinking long after the last page has been turned." ( Family Circle)

Cosa pensano gli ascoltatori di No One You Know

I've listened to in ages. If you're not into math, don't be concerned at all. The Pact and ...Fog...had me going crazy (5 star crazy) but, nevertheless, crazy. I have just purchased her 4th book. I love her writing and the narrators.

Predictable but still a good read. That is my summation of No One You Know. The plot was compelling, but I could tell everything that was going to happen. Otherwise, the writing was good. I recently read The Nightingale, and I was comparing and contrasting this book with that one. I thought The Nightingale had a predictable plot AND schlocky writing. This book at least had decent writing. Other things I liked about it: I have never read a book that had a character who was involved in the coffee business. Since I love coffee, I found the explanations about the coffee trade to be interesting. One of the other major characters was a serious mathematician. The author threw in a lot of info about mathematical theories and concepts that were sort of interesting as well.

(spoiler alert here )
I especially disliked the characterization of Jim Thorpe. He was really a creepy guy, but the main character really liked him for some strange reason. The descriptions of him were predictably creepy as well. However, since the main character did like him, the author threw in a few supposedly likeable traits. These traits never made up for his creepiness. In the end he was kind of dropped, or I didn’t get what she was trying to say about him at the end of the book. He deserved more of a “comeuppance” if not a jail sentence, but instead… well, it seems he just drifts off into no man’s land.

The best thing about it was that I enjoyed reading it and wanted to finish it. That’s always a good thing :)

Enjoyed this Book So Much!

I enjoyed this book so much! I loved the Math, the Coffee Tasting, the Travel, and San Francisco. I think Ms. Richmond has a lovely way about her prose, but what I loved most was the rich tapestry of new information that I got just as wrapped up in as the story. I was fascinated by the explanation of a perfect number, and found myself wondering what my own favorite number might be – and I’ve always been a bit of a math phobic. I was equally fascinated by the information about coffee tasting and the attributes that might equip someone to be a good taster. I found the “business” of this story very enriching to the experience of this book. The larger themes of the book – the sudden unexplained death of a loved one and how that death can disrupt, or even derail the lives of those left behind was handled well – as was another major theme about how people can co-opt great tragedy for their own career advancement without any real regard for truth or responsibility for the way their opportunistic use of other people’s tragedies can become as much as an assault as the original injury.