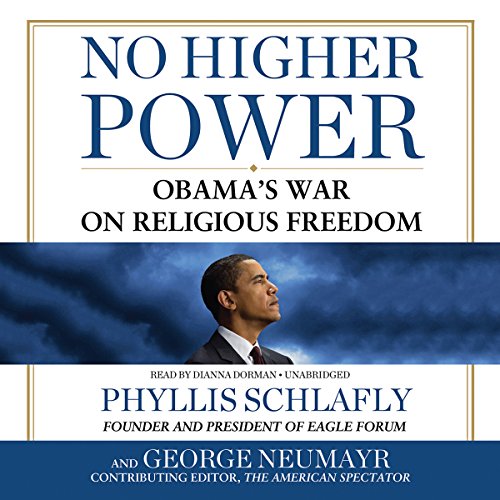 In No Higher Power, Schlafly and Neumayr show how Obama is waging war on our religious liberties and actively working to create one nation under him rather than one nation under God. "Obama views traditional religion as a temporary opiate for the poor, confused, and jobless - a drug that will dissipate as the federal government assumes more God-like powers, and his new secularist beliefs and policies gain adherents," write Schlafly and Neumayr.

From cutting funding for religious schools to Obama’s deliberate omission of God and religion in public speeches to his assault on the Catholic church, No Higher Power is a shocking and comprehensive look at how Obama is violating one of our most fundamental rights - and remaking our country into a nation our Founding Fathers would hardly recognize.

"A powerful exposé…. A practical guide for reclaiming what should never have been lost." (David Limbaugh,  New York Times best-selling author,  The Flipside of Feminisim)

What did you love best about No Higher Power?

Everyone should have this book. It's not just a "religious" book, it's a road map of what's to come.

Have you listened to any of Dianna Dorman’s other performances before? How does this one compare?

This book made me cry for America.

What did you love best about No Higher Power?

The detailed evidence that was presented.

What was one of the most memorable moments of No Higher Power?

Yes, the detailed evidence of Obama's background & how he is a ruthless Chicago politician

I listened-twice- to Ms Schlafly's book after seeing her on CPAN Weekend Book edition. I find her and her co-author's facts and footnotes to be accurate. Her finding on Obama's position on abortion and anti Pro Life to be compelling. I was slack jawed when I listened to that chapter.
I agree with her summary and position as it is inescapable after her citations of the facts. Obama is anti-Christian in many of his positions. I am wondering what positions he takes on any principle that could be construed as Christian or sympathetic to the Catholic Church's positions.
I also wonder how an Evangelical or Catholic could defend voting for Obama given the facts Ms Schlafly illustrated?
The reader did a very good job. I recommend this book. Also after listening to "No Higher Power" I went back to listen to David Limbaugh's Audible "Persecution" which is an analysis of the anti Christian anti-Catholic positions in government before Obama was elected.

I never knew the extent that Obama has succeeded!

Ms. Shlafly has done us a great service by compiling all those facts about Obama's action against believers.

Extremely informative of Obama’s abuse of power and war on religious freedoms. Surprisingly timeless. One of the best audios as well.