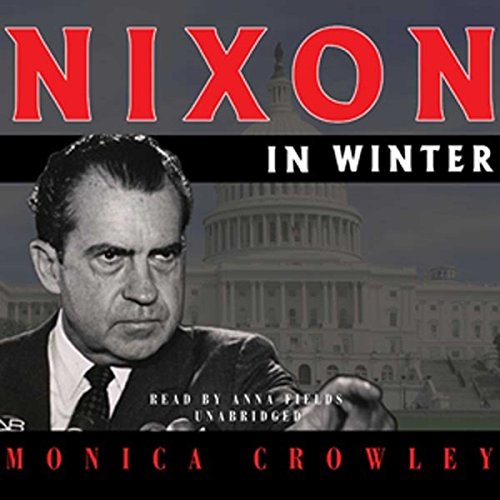 During the last four years of Richard Nixon's life, Monica Crowley served as his foreign-policy assistant and political confidante - a trusted member of the small circle of advisers with whom he shared hours of daily one-on-one conversations. This is the remarkable story of the final public and private years of the 37th president, based on full reconstructions of the conversations Crowley had with him at the time. Nixon in Winter puts the listener behind the scenes with the former president, allowing a unique glimpse into his life as elder statesman and private citizen. It is filled with dramatic revelations about Nixon's influential role on the world stage, whether taking action himself to guide American foreign policy or whispering advice to his successors. His hardheaded views on the end of the cold war, his emotional final trip to China, his powerful inside role during the 1991 Persian Gulf War, and his poignant thoughts on the legacy of Vietnam are recounted, as well as his frustrations with being out of power and with the foreign-policy failures of presidents Bush and Clinton. With astonishing candor, Nixon also shares his final, startling thoughts of Watergate, including his assessments of all the major players in the scandal and what he would - and would not - have done differently. And he offers an uncompromising look at the way the sexual scandals surrounding the Kennedys, Bill Clinton, Clarence Thomas, and Robert Packwood have changed the politics of scandal. Above all, he reveals a more private self than ever before as he reflects on his faith and his family, copes with the death of Mrs. Nixon, and struggles to deal with aging and the only force that could ultimately destroy him: death.
©1998 Crowley and Baron, Inc. (P)1998 Blackstone Audiobooks

I was a senior is HS when Nixon resigned in 74. I felt betrayed , then, because I felt he had lied to the American people. I was always, however, impressed with Nixon's accomplishments and his ability to always fight back and return. This book is about Nixon's post-watergate re-emergence. I found the book very interesting, especially the areas where Nixon worked behind the scenes in politics and world affairs. The portion dealing with his relationships and the death of his wife was especially poignant. Nixon's need to be remembered, and not for Watergate, was a driving force as he saw his end on the horizon.

If you could sum up Nixon in Winter in three words, what would they be?

I have no idea why Nixon fascinates me so much, but this is a great account of his last years. A man still trying to redeem himself after such a stupid mistake with Watergate. A brilliant mind unfairly sidelined for a relatively small political infraction, Nixon was probably more surprised than most to be driven from office for covering up the crime of bugging the Democrats. Parties had been bugging each other for years. It was seen as standard operating procedure, not as the crime of the century. From resignation to death, Nixon tried to become the respected elder statesman he craved. Yet, history and time can be an angry parent, unwilling to ever fully forgive, and reminding you often that you are unworthy. Listening to Nixon comment, criticize, scheme, and educate others is a brilliant window into his world and mind.

A very deep and personal feel to the book

I bought the book with a bit of doubt in my mind. I read some reviews and they were not great. Or at least not as great as I expected them to be, having in view that we were talking about a book written by someone who observed Nixon's life as it draw to a close.

Now that i went through it I must tell you it is worth every minute of listening time.
You may not get the juicy historical facts but what you will get is Nixon as he was and taught in his last years of life. You see him as the man that he was and the man who he wanted to be and how he attempted to make peace, with the world and with himself.

The performance of Anna Fields is great. The sound is pretty low quality but it mimics the quality of the sound from movies in the 60s and 70s so it really gives it a particular feel. And the fact that there is a feminine voice narrating the story, makes you feel all the more close to Nixon the man.

Gave me a whole new insight into Nixon

A beautiful and honest portrayal of Nixon in his last four productive years. A tragic figure of a man whose many faults shown through along with his very human nature. I forgive you, Pres. Nixon. May you rest in peace.

The recording itself was of sub-quality although the narration was fine, a slight annoyance only.

Remarkable, but a shame how Crowley turned out

This a tremendously entertaining book, made all the more remarkable because it was written by someone who was very close to Nixon. Unlike so many other books that crucify Nixon from a distance, the personal contact here makes for a fascinating read.

Crowley, who spent many of the finals years of Nixon's life at his side, covers everything from his struggle for relevancy to his opinions on policy and his surprisingly tender human side.

I highly recommend this, though it is a shame how Crowley turned out later in her life. I found her treatment of Nixon even-handed and objective in this book, despite her proximity to him, and though I might enjoy her more recent work. However, it seems as if she has hardened her political views significantly since this was published, and can now only be found on far-right radio shows saying some laughably ridiculous things about politics and the world in general.

Still, this is classic that should not be missed.

Although I dont consider myself right wing, I truly respect the accomplishments of Nixon, the opening of China, his founding of the EPA, things that you would never expect from a right winger today. But this book sucked. Written by a young girl who admires Nixon not as a man, but as a god. She dwells on his every movement, down to Nixon's culinary limitations of only being able to heat up cans of food. I was expecting to gain some insight and respect for this man, and what I heard was a trite, bitter old man that kept talking of his has beens, what could have beens, and amazingly, he is still talking about how all of his enemies are out to get him. After I got about halfway, I couldnt take it anymore. I just felt sorry for this broken down old man, who felt the need to hire people ( the author) in order to have an adoring fan. It made me feel that all the stories about Nixon being paranoid and petty were true, while if I hadnt heard this book, I would have discounted such stories. I wish I never had purchased this book. I feel dirty after listening to it. I feel like I invaded Nixon's privacy, and listened to things I should not have heard.

This is a fascinating book about the last few years of President Nixons life, it shows he was still a passionate advocate of foreign policy in America. Full of ideas and not afraid to stick it down the throats of currant administrations in the White House and to foreign powers both home and abroad. His passion on Russia, China and various other parts of the world comes through very strongly as does his frustration that his ability to get things done is limited. It does show more to Nixon than Watergate, which is in the book and does tell his regrets in his political life. I was truly amazed at how his passion had not lessened with age and he did become a true elder statesman and I have come to understand Nixon just that bit more and can't help but wonder what would have happened if he'd lived longer.