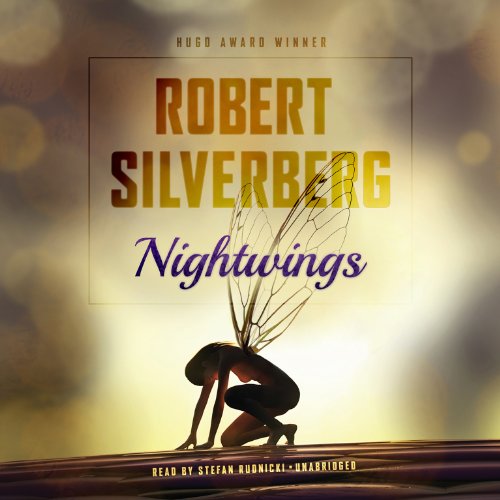 Robert Silverberg's enduring classic about one man's journey to find salvation for a planet on the brink of destruction.

"Roum is a city built on seven hills. They say it was a capital of man in one of the earlier cycles. I knew nothing of that, for my guild was Watching, not Remembering."

For 1,000 years, mankind has lived under the threat of invasion from an alien race. After the oceans rose and the continents were reshaped, people divided into guilds - Musicians, Scribes, Merchants, Clowns, and more. The Watchers wander the Earth, scouring the skies for signs of enemies from the stars. But during one Watcher's journey to the ancient city of Roum with his companion, a Flier named Avluela, a moment of distraction allows the invaders to advance. When the Watcher finally sounds the alarm, it's too late: the star people are poised to conquer all.

And so with the world in turmoil, the Watcher sets outalone for the Hall of the Rememberers, keepers of the past, where humanity's last hope for survival might be hidden.

This book started out as a series of three novellas by sci-fi master Robert Silverberg: Nightwings, Perris Way and To Jorslem. The Nightwings novella (now Part 1) is an outstanding work, which deservedly won the Hugo Award for Best Novella in 1969. Silverberg subsequently made some minor revisions and combined the Nightwings novella and its two sequels into the present book, also entitled Nightwings. The story begins on an Earth which suffers from environmental devastation and the aftermath of alien domination. Earth has been reduced to a fragmented and demoralized society, populated by various guilds, such as the Defenders (soldiers), Dominators (rulers), etc. The main character, Tomis, is a member of the Watchers Guild. He wanders about with a cart of instruments which he employs on a daily basis, monitoring the skies so that he can alert the Defenders when and if a new alien invasion materializes. Tomis is accompanied by Avluela, a fairy-like member of the Fliers Guild, and, Gormon, a deformed guild-less outcast. Together, the three companions arrive at the feudal city-state of Roum (formerly Rome) where Avluela attracts the lustful fancy of the decadent Prince of Roum. Part 1 ("Nightwings") is a masterpiece of dark mood, exotic characters and intriguing plot set in a post-apocalyptical Earth. Part 2 (“Among the Rememberers”) holds its own, but the quality falters in the final third (“The Road to Jorslem”) -- perhaps an example of an author stretching a great idea into one sequel too many. Still, Part 1 ("Nightwings"), which won the Hugo Award in slightly modified form, is well worth the price of admission and highly recommended on its own right.

A tale for our times

Beautiful and thought provoking fable for the era we are living through today and for the future.

Listen with a clear head

I listened for the science fiction, I came away with story about grace and redemption. There is science fiction here to be sure, but at its core, this is a story of the hubris of mankind.

Well written and easy to listen to. The narrator seemed gruff and incongruous at first, but after getting used to his voice, I found it fit the character well as the story is written in first person.

I PUT ON A THINKING CAP

I WATCHED ROUM FALL A SECOND TIME
I don't know why RS never wrote Historical Fiction? He often puts European or Middle East history in his futures. In this book we go to Roum and Paris. I enjoyed the main character who is a Watcher. He is watching for an alien invasion that has been predicted. Watchers have been watching for hundreds of years and no invasion has happened. He uses equipment in which he does not understand the workings. He is given his life to this, but people don't take his job serious, since no invasion has happened.

WE WOULD CONQUER OUR CONQUERORS NOT WITH WEAPONS, BUT WITH LOVE
RS's very liberal side comes out in this book. Man has bankrupted Earth and gone from a leading planet to one of the poorest. A lot of people have been genetically changed. The title of the book involves genetically altered humans into fairy type creatures. One of the main characters is one. She has a very slight figure, is flat chested with a high squeaky voice and all the main characters fall in love with her. She can only fly a night, cause the solar winds are to hard on her during the day.

Rudnicki does a usually great job.

I PITY YOU, BUT I FIND IT UNGRACEFUL OF YOU TO PITY YOURSELF

I loved the story and the narration was perfect! The book is very original and engaging. The main character is caring and sympathetic, but sees himself as flawed. The supporting characters are all interesting. The last part of the book is very touching and I didn’t want it to end!

A story worth every moment

With depth and near poetic moments, this story is a worthwhile investment of time. Again Stefan Rudnicki delivers a stellar performance of Robert Silverbergs story.

Story. I assume if you liked stranger in a strange land, you will like this not same thing but hmm optimistic.

Fortunately this is a short book. Kept waiting for story to take off. The moral of the story was... Conquer the conquerors with love.... Seriously I wasted my time for that!!!

Usually narrator is excellent but he had the wrong voice for this story.

in general i like Silverberg but i think this one fizzles at the end. a friend listened at same time and he felt basically the same as i do on all these points.

part one is the best section and contains the most interesting characters and aspects. it is the original short story/novella that won a hugo award and that is it's strength: it is an open-ended yet at least unified piece. there in lies the trouble, as he decided to continue or expand the story into a novel.

part 2 suffers from a slow down of the narrative and moves from the Rome(Roum) of part 1 into a journey to Paris(Perris) and while it has some interesting things, it really suffers from the absence of Avluela the Nightwing of the title, one of the more interesting characters.

Part 3 heads to Jerusalem(Jorslem) and picks up again with the help of the reappearance of Avluela but the novel ends with some interesting ideas that go undeveloped. The regeneration back to youth is good but I would have liked for that bit to come sooner and get worked with.

I like a lot of the stuff within the story, the guild structure of the society, the apocalyptic setting, the alien threat, the characters (especially in the first 1/3).

in fact there is a lot I like about this and if it had a re-worked middle, and a few things developed more at the end, it would have been very good. the main character Tomis, goes through some good development.

it reminded me of Canticle for Liebowitz, mainly for the setting that i at least envisioned, though it is very different and not of that caliber.

troublesome middle hinders this one i think.

First, let me say that I like Stefan Rudnicki. He has a deep, expressive voice and is an excellent narrator. I have other audiobooks he has narrated that I thoroughly enjoyed.

However, his distinctive, baritone voice is often inappropriate for most women's voices, and at worst, as in the character Avluela, distracting and annoying.

Still, the tale was worthwhile, and, so long as Avluela was absent, a good listen.