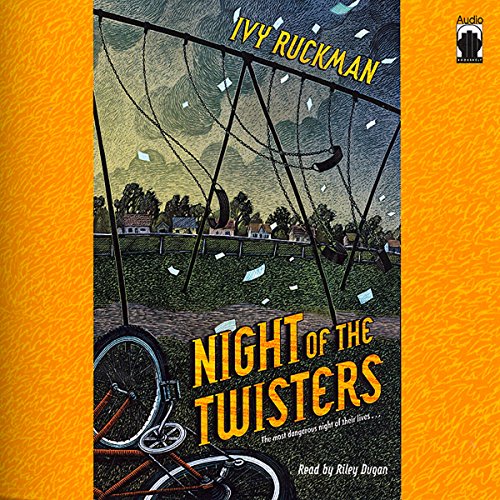 When a tornado watch is issued one Tuesday evening in June, 12-year-old Dan Hatch and his best friend, Arthur, don't think much of it. After all, tornado warnings are a way of life during the summer in Grand Island, Nebraska. But soon enough things change and little do they know that even if they do survive the storm, their ordeal will have only just begun.
©1984 Ivy Ruckman (P)2009 Audiobookshelf

I loved this book as a kid--I bought it for my daughters to listen to but ended up listening to it again myself. Ivy Ruckman is an under-appreciated children's book author, and it is a shame that more people don't read her stories. This book was inspired by true events that occurred in the 1970s, so it is a bit dated. Nevertheless, it is still an exciting, fast-paced story. I like the values of courage, self-reliance and determination that children can glean from it. It should be a must-read.

I lived threw this tornado that happen June 3, 1980. Our family lived in the Capital Heights area. When the tornado warning sirens went off, my best friend & I were cruising South Locust . We made it to my house & into the basement with my family . Every other house was gone.

I really enjoyed listening this book 📖 😊. It was entertaining and interesting. Great book!

since I was a kid

Having lived in Kansas, and through more than one tornado; this is and always will be a favorite story

I truly loved this book. It has an amazing and moving story that is amazing!

the book helped me understand what happened and how the kids were affected by it.