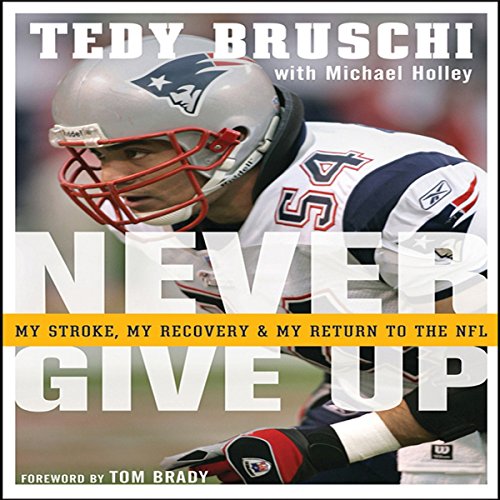 As a linebacker for the New England Patriots, who had just won their third Super Bowl in four years, Tedy Bruschi was no stranger to pain or to overcoming a challenge. But even 11 years in the NFL had not prepared him for what happened at four o'clock in the morning on February 16, 2005.

Tedy awoke with an intense headache and was forced to crawl to the bathroom because his left arm and leg were not working very well. Seven hours later - as he lay on an ER gurney, his vision blurred, his arm and leg useless - he was stunned to learn that he had had a stroke. A few days later, he confessed to his family and his team that he believed his football-playing days were over.

In Never Give Up, Tedy Bruschi tells the powerful and inspiring story of the day when everything he believed about himself and his future was turned upside down, and how its long and grueling aftermath challenged his faith, his marriage, and his career. From the heartbreak of being warned by doctors not to pick up his children to the terrifying prospect of heart surgery, Tedy paints a vivid portrait of the obstacles faced by stroke survivors.

Tedy has a vital message for stroke survivors: You can do it. You can take charge of your recovery, reclaim your life, and achieve the goals you set for yourself before disaster struck. It won't be easy; it will be the hardest thing you've ever done, but you'll have plenty of help. You'll have the expert care of highly trained doctors and therapists, the loving support of family and friends, and the inspiring example of Tedy Bruschi's unforgettable memoir, Never Give Up.

©2007 Ted Bruschi (P)2008 Gildan Media Corp
"His story is a compelling and convincing one that will appeal to both football fans and those affected by strokes." ( Publishers Weekly)

Great book; recording missing a good chunk of it.

I loved reading Tedy Bruschi's story--so much so that I encouraged my wife (no kind of football fan, really) to give this recording a try. It is very inspiring. Given the constant firehose-stream of negativity coming through most media every day, it is also sorely needed.

That said, there is an odd issue with the recording itself. The hardcover edition of the book runs 266 pages, not including the very brief appendix. This recording (the 7 hrs. and 1 min. version, just in case it is corrected in the future) ends somewhere near the top of what would be page 234, suddenly concluding with the familiar "Audible hopes you have enjoyed this program."

It's not a deal-breaker as far as the story itself is concerned. Really, were it not for the abruptness of the ending, one might not even notice the omission. Just know that the recording lies somewhere between the "abridged" and "unabridged" categories.

Still: worth the listen. The "meat" of Tedy's story is all very much still there.

perseverance and inspiration, great message, I needed it to wake me up after my stroke.

Good book not so good narrating

The story was good but a couple of times there was weird pauses and the audio ends about 30 pages before the book does.

Not the full book

What would have made Never Give Up better?

The recording ends abruptly before the book does. You're not getting the entire book with this recording. There are also a few instances where there are long awkward pauses between sentences.

What was one of the most memorable moments of Never Give Up?

Love the story, and Teddy Bruschi.

What aspect of Mark Adams’s performance would you have changed?

I thought he did a fine job. Just some editing issues and the book cutting out before the end was a bummer.

What character would you cut from Never Give Up?

It's non-fiction. Though if I were to cut anybody it would be the 2005 Denver Broncos in the Divisional round... Then Pats would have advanced!