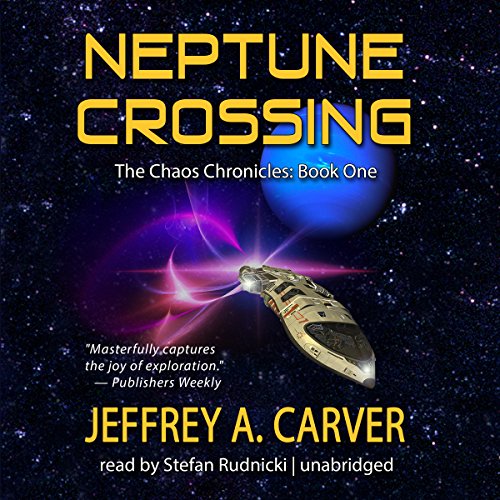 The first installment in the thrilling, action-packed Chaos Chronicles.

When John Bandicut sets out across the surface of Triton, he's hardly ready for the storm of chaos that's about to blow through his life. The alien Quarx that soon inhabits his mind is humanity's first contact with an alien life. The Quarx, part of an ancient galactic civilization that manipulates chaos theory to predict catastrophic events, seeks to prevent a cometary collision that could destroy the Earth. But it must have help.

If Bandicut chooses to trust the Quarx, he must break all the rules - indeed, sacrifice his life as he knows it - to prevent humanity's greatest cataclysm. Leaving friends and a lover behind, hurtling across the solar system in a stolen spaceship, Bandicut can only pray that his actions will save the Earth - even if he doesn't live to see it again.

Much better than just reading the book!

First of all, you have probably noticed that this book is not narrated by the author, Jeffrey Carver, and thank goodness for that matter, because, during the afterward, you'll hear that the author has a distinctly thin and nasally quality that would have made me go back to just reading the book again.

The actual narrator, a Mr. Stefan Rudnicki, was SO well adapted to this story that I hope he's given the rest of the Chaos Chronicles to recite as well. This is not a slight to the highly talented Mirron Willis, who has been the capable narrator of the Star Rigger series.

There's a very specific charm to Mr. Rudnicki that goes beyond plain narration, and that's ACTING. When one sees an exclamation point in a paragraph, one expects to hear that exclamation, but never gets it. But with Stefan R. you get an ACTOR who is narrating rather than the other way around.

In particular, when Bandicut is experiencing his "silence-fugues," (no spoilers here!) SR's narration takes on a very real quality that is just as the author describes it to be; and, as odd and/or tragic as they seem, they have an element of comedy to them, that I doubt that any other actors would be able to carry, and a narrator would be wholly in the dark about.

I would recommend this book to any hard-scifi fan, especially in older YAs and anyone who's a bit bored with the same old "song and dance"

This is not only amusing, but it can be very humorous too.

An excellent choice for a narrator from a fan

I have absolutely loved the Chaos Chronicles since I found it some 10?+ years ago in my local Barnes and Noble and even after reading it I'm sure a dozen or so times by now listening to the story now still has me pulled tight into the story of John and Charlie and I don't want to stop listening. Please continue to make the rest of the series into audio-books! Fans of this series would love to see more of this. I especially liked all of the added sound effects brought in during the neuro-link scenes and such it really pulled me more into the story and Stefan, while I wasn't sure if I liked him at first has won me over as narrator for this series.

unremarkable YA about a man and his alien

Consists mainly of tedious inner monologue and inner dialog. Not sure why this oldie needed audiobook treatment. Rudnicki is wasted here.

interesting but the devoid of action or suspense.

A sleepy tale with a main character who's a bit whiny. The unseen alien is hard to embrace. Despite some shortcomings I enjoyed the book, it reminded me a little of 2001 A Space Odyssey.

Know that I am horrid about taking the time to write any reviews. But I am trying to change that. To be honest, I purchased this book mostly because it was performed by Stefan Rudnicki. His performance in the Prince Roger series by David Weber and John Ringo had me in tears they were so good. Stefan has a vast collection to listen to, Ender's Game is just one example.

Neptune Crossing is one of those great books people would call a page-turner. The characters, environment and emotional content were well thought out. Even science was credible to believe. For a book that I thought I would spend a few days listening to on and off, I ended up listening to it in full non-stop.

The character John Bandicut, our resigned hero within the story could have been anyone like you and me. I could really feel along with the character in his attempt to save the Earth and the emotions he fights his way through.

Having already bought book two, I shall sign out here with a most favorable recommendation. Grab this book today, and lean back in your favorite chair for an amazing adventure.

Boring... What is the point?

It just kept going and going... without going anywhere. About 4 hours in, I started skipping the second half of each chapter... and found I had not missed anything. With 4 hours left to go, I just gave up and stopped.

Boring, and definitely not something I want to hear any more of.

Takes the Lord’s name in vain...a lot. Why not take Allah’s name as a curse word instead. That wouldn’t bother me at all.

The characters in the book are not likable or even understandable. Main character is whiney and has anger management issues. He's dealing with big things but even so he reacts erratically. It was a real push to finish this book. There are tons of things that happen in the book that don't push the story at all and exist just to exist? I never felt any real tension. I did enjoy a couple scenes quite a bit, but those were scenes that had very little to do with the story and were one of the few times I wasn't experiencing whiplash from the main character's erratic behavior and reactions.

I listen to a lot of great Syfi and sadly this one just isn't great. The author notes in his post text that he wanted to drag a simple story out, Well he nailed it. character development take way too long, and nothing really happens in the meat of the story until about 3/5 the west through the book.

The idea was decent, but the details were bad, and author was flat and boring.