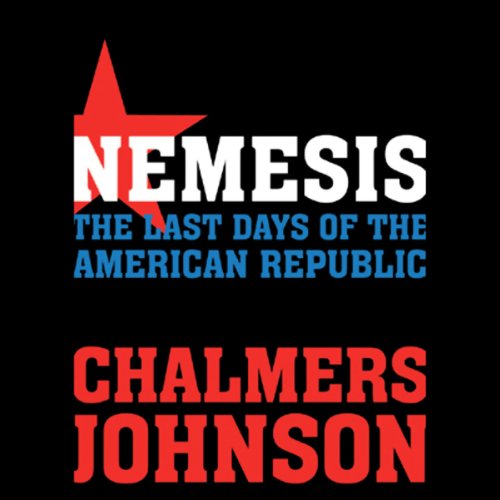 In Nemesis, Chalmers Johnson shows how American imperialism is undermining the republic, both economically and politically.

Drawing comparisons to empires past, Johnson explores in vivid detail the likely consequences of dependence on a permanent war economy, and what it will mean when the globe's sole "hyperpower" is no longer capable of paying for the vaulting ambitions of its leaders - and becomes the greatest hyper-debtor of all time. In his stunning conclusion, Johnson suggests that the crisis of a financial breakdown could ultimately prove to be the only path to a renewed nation.

"[A] biting, often effective indictment of some ugly and troubling features of America's foreign policy and domestic politics." (Publishers Weekly)

The Tone is too harsh

I agree with everything the author writes, and then some. It's infuriating, what this country's become. The author's self-righteous tone will appeal mostly to the convinced. In his telling, the US is always bad, bad, and has never done anything on the world stage that's the slightest bit altruistic. While this is mostly true, and while the author has his facts perfectly in line (the account of the US soldiers guarding the Iraqi Oil Ministry while allowing Iraq's irreplaceable historical tresures fall to looting - is especially harrowing), I would probably look elsewhere if you are giving this to someone who already thinks liberals can't stop the reflexive America-bashing.

Wow... If We Only Would Learn From History!

I thought that this was a fascinating book that really laid out a real possibility of the path that our country is on if we don't start taking measures to do and be better.

I study and appreciate history and can clearly see how the US is is headed for serious changes if we aren't careful.

The Book Bill O'Rielly Doesn't Want You To Read!

Sad but true, the US is not the wandering do-gooder it's made out to be by FoxNews. We've got a long, rich history of meddling in the affairs of other nations with catastrophic results. Chalmers Johnson pulls no punches in explaining why. He details the parallels of the American empire with those of Rome and Britain. Truly scary stuff. You must read this BEFORE appearing on Bill O'Rielly.

the 1st 2 books in the series are better. This was redundant. Still a clearly written and damning book. Long live Putin.

Though this is a book length diatribe against the Bush administration Johnson is a serious researcher and has a very good reputation for knowing what he is talking about. I have read some other things he has written, but they dealt with other issues. He really digs in and goes beyond the silly chanting you hear at rallies and explains what he is furious about...though after a while it is obvious that he is coming from the far left at which point it is difficult to take him as serious.

This book is an excellent and clear history of United States imperialism and why it's essential to get off this path. Very well read as well.

loved it very much information in this book!
hope your ready to learn the truth of our diseased country the disease of money!!

A fine read for all who think the U.S. May be on a bad path.

I did not particularly like the reading but found myself addicted to it. This book is a must read or listen for those who believe the U.S. may be on a dangerous path. There are great examples given throughout woven with delicate care into philosophical conversations about where the U.S. is and where it is going. The very final example of what Great Britain did to avoid the inevitable is interesting but not the only alternative. Listen to it.

Very informative and well-researched book and the narrator is very clear and easy to understand. However too one-sided and Mr. Johnson is often in internally contradictory in his efforts to demonize (He criticizes the Americans for both ignoring the language of written agreements and treaties and then later for insisting on strict readings of those same written agreements) There is a fertile area to research and Mr Johnson is an admirable researcher and writer but his impersonation of an left wing version of FOX NEWS heavily damages his credibility.