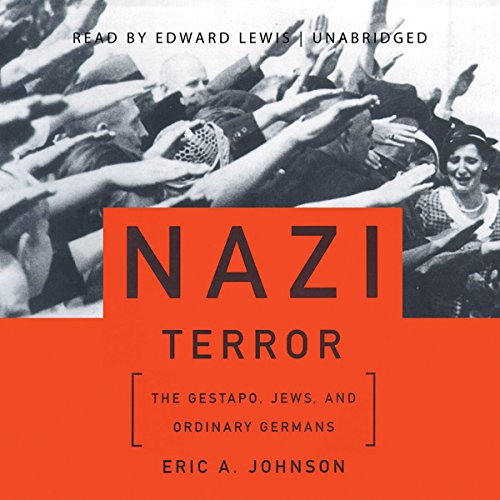 Who were the Gestapo officers? Were they merely banal paper shufflers, or were they recognizably evil? Were they motivated by an eliminationist anti-Semitism? Did the average German know about the mass murder of Jews and other undesirables while they were happening? Exactly how was Nazi terror applied in the daily lives of ordinary Jews and Germans? Eric A. Johnson answers these questions as he explores the roles of the individual and of society in making terror work.

Based on years of research in Gestapo archives as well as extensive interviews with perpetrators and victims, Nazi Terror settles many nagging questions about who, exactly, was responsible for what, who knew what, and when they knew it. It is the most fine-grained portrait we may ever have of the mechanism of terror in a dictatorship.

Destined to become the classic study of terror in the Nazi dictatorship, and the benchmark for the next generation of Nazi and Holocaust scholarship, Nazi Terror tackles the central aspect of the Nazi dictatorship head on by focusing on the roles of the individual and of society in making terror work.

The narrator reads too quickly and his delivery is in an awkward high speed monotone without proper sentence pacing. The writing is also questionable, for example, content about Gestapo agents comes out like someone reading the agents' day planner, and quite boring. I would refer an interested listener to William L. Shirer's 'The Rise and Fall of the Third Reich' for a more comprehensive, more engaging, and better referenced book on the subject.

Love the content but narrator is way too fast

I am trying very hard to enjoy this as the subject matter is so intruiging, and the writing is good. My challenge is how 'fast' the narrator speaks. I am seriously looking for a way to slow down the audio over all, otherwise I feel like someone is speed reading and audio books are not so.

See John Lee. If he read this, I would be in bliss. Or if the current gentleman just slowed down.

Sincerely, Not so Speedy I plead thee

Answered Some Questions For Me

I first learned about the terrible crimes committed by the Nazis when the story of the of the death camps was shown on broadcast television in the late 1950s. I could not then, and still do not understand how the so many people stood around and let this happen, much less assist in the exterminitation of the Jewish and Polish people. Ths book provided some insight and answered many of my quations.

What disappointed you about Nazi Terror?

The first hour of the book is excruciating. The topic for this section is how this researcher performed his research and a seemingly endless recitation of other author's works and the conclusions the other authors reached. This book is an academic exercise, not an effort to engage the listener in the narrative. Coupled with the author's tedious style, the narrator has a fast paced monotone that had me fighting to stop until I finally became able to tolerate it enough to get through the book.

The book was great; Johnson incorporates careful research on historical archives in Germany into his work and convincingly overthrows many myths about the interaction between the German people during the second world war and the Gestapo.

The narrator is slightly faster than normal but still slower than a normal person talking. He did a fine job.

History By The Numbers

As to form: the performance of the book is awful. The narrator pauses at the end of each sentence for so long that I sped up the replay to 1.5x, which raised his voice to an amusing pitch but at least kept the story moving. Now as to substance...

You know it's may be a tough go when an author spends an entire foreward thanking his research assistants...every last one of them in all countries...his family...his dogs (OK no dogs). It lasted for probably 15 minutes, based on how close I'd gotten to work while listening. This is when you say to yourself, strap me in, it's gonna get wild.

The book itself is just dry. Numbers, numbers, numbers. 1933, 4 denunciations, 2 by strangers; 1935, 3 denunciations, one by a stranger, and on and on (and on). The book becomes very hard to follow. It's a shame. Johnson has done a lot of meticulous, focused research, primarily in Gestapo records for a prominent city, a smaller city, a small town. He's obviously spent years at it, done commendable scholarship and compiled quite a record. You can't really quarrel with the structure of his work. It's thematic. The problem for me is that it's driven not by stories but by tables, which are read out loud periodically. It reminds me of a course I had in grad school where the professor kept trying to tell the story of the Civil War by reciting statistics about the production of pig iron. Historians who recite numbers are only doing part of the job. They're why people hate history. A historian has to tell a story. These were real people with real lives. They drank coffee, they rode the S-bahn, they didn't want to go in on Mondays, they were terrified someone would hear them listening to the BBC. Too much of this book - for me - was letting the numbers speak. The individual stories told were not of much interest.

The exception is at the end of the first part, where he discusses clergy who were persecuted by the Nazis. He glosses over Niemoller and Bonhoeffer, which is refreshing, to tell the story of a pair of Catholic priests. One rebels by attacking the Nazis from the pulpit, and stands up to the Gestapo in such an admirable way it seems even the Nazis had to recognize it. He gets transferred by the Church, and when he keeps talking, the Church packs him off to Chile, and when he still keeps talking, they send him off to some place so far out there in Chile that I'm not sure they've got running water and a printing press so he can keep making trouble. A hero.

The second priest is turned in by the Church for molesting young boys, in a high profile case. The story is told in gut turning detail, which is in the records because the Gestapo were thorough and painstaking with any investigation involving sex, such as between Jewish men and German women. He receives what Johnson describes as "comparatively light sentences" despite incontrovertible evidence from several victims, and eventually ends up in Dachau. Johnson questions whether the Church "did all it could to ease [the] plight" of both men. In the case of Father G, the sex offender, when his behavior is uncovered the Church first sends him off to another post. The second time they notify the Gestapo. Johnson asks, "could [the Church] not have found another solution?" Are you kidding? Noting the priest's eventual death in Dachau, Johnson notes, "after six years of misery, his ordeal was over."

This guy was a child molester. "Misery" and "ordeal"??? After molesting children? I'm not suggesting in the remote that Johnson doesn't think the guy is a despicable pervert, but when did German history suddenly run out of sympathetic victims with heartbreaking stories, so that a historian had to rely on this criminal? He wasn't a consenting adult doing with other consenting adults what is nobody's business but theirs. Hate to wear out the phrase, he was a child molester. Father G is not a case of what Johnson labels persecution, but prosecution - the first example I've ever heard of where Nazi justice was actually justice.

Note I'm only reviewing part one - I'm not bothering with part two.

What disappointed you about Nazi Terror?

the first 1.5 hours is the author giving the history of how he wrote the book.......then the next hour is telling you what's in the book.........by this time you'll just want to turn it off

What was most disappointing about Eric A. Johnson’s story?

The narration is really bad, and I do mean bad....extremely mono toned

The narrator is so important

Would you try another book written by Eric A. Johnson or narrated by Edward Lewis?

No, this is the second book ruined by the runaway staccato narration by Edward Lewis,
(King Of The Jews, the other book). Is he trying to beat some speed record in narration?
This is such an informative book to be absorbed slowly and thought about in depth but for the second time I have had to give up because of the irritating, grating narration which totally destroys concentration.

What was one of the most memorable moments of Nazi Terror?

The stories we don't hear about, the shades of grey

As mentioned, staccato, too fast, emotionless

Did Nazi Terror inspire you to do anything?

Make sure I check the narrator first!

I downloaded this book believing that I would learn something new not covered in other similar titles, but alas it was not meant to be. The way the book is laid out is boring and extremely long winded. The narrator does a good job with the text and delivers the audio beautifully therefore I've awarded the book two stars out of five, but for the book itself as it was so dull I give this one a zero out of five. Nothing new here, its just a plain old history book certainly not worthy of the price. Very disappointed.