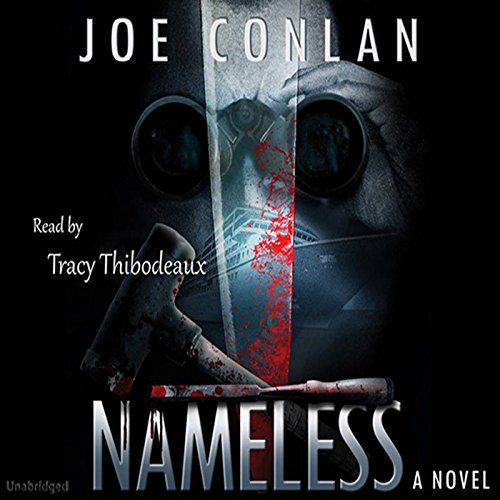 Chilling and taut, Nameless, introduces a fresh and exciting twist on the deadly game of cat and mouse. By virtue of one impulsive and deeply human, but all too grave mistake, a good and decent man finds himself pitted against the embodiment of evil and threatened with losing everything and everyone he loves and values; including the pristine reputation he has endeavored all his adult life to establish.

FBI Special Agent in Charge Daniel Falcone unwittingly steps onto course for a head-on collision with a frighteningly brilliant psychotic serial killer, whose harrowing childhood abuse and neglect left him devoid of humanity and salivating for revenge. Framed for a brutal murder on a commercial cruise ship, and fighting for the right to raise his sons and clear his name, Falcone races against the clock and struggles to keep his eyes on the prize, even while his profound guilt and self-loathing threaten to destroy him faster than his maniacal adversary.

"You Will Know His Name... The characters relationships and interactions are full of struggles and fun, not just purely good or bad. Nameless is definitely a book for those long days at the beach and one that will keep you reading until the end." ( Portland Book Review)

Have you listened to any of Tracy Thibodeaux’s other performances before? How does this one compare?

I have never listened to Tracy Thibodeaux before but I thought He did a really GOOD job. I thought his inflections and voice changes for different characters was really good. I did not think he sounded like Shatner but it's just my opinion.

This was a REALLY good book. I really hope this author takes off because I could easily see him becoming one of my favorites. Although this book is quite long the story was a page turner throughout. There were no lulls, it was not repetitive and there were quite a few scenes that I did not see coming even though there were actually some subtle warnings (like if only she/he had done this, missed a sign, came home later etc then the events that occurred could have been avoided). This author is so talented I can't say enough about this book. There are lots of characters, plots and subplots galore but so well told you only have to listen. I just can't wait for a sequel!!

Narrated by a William Shatner impressionist?

Would you listen to Nameless again? Why?

No. The narrator was so distracting it was hard to get through. I haven't seen the physical book, but i'm guessing there isn't a comma after every word.

The killer. He was just a well rounded character, plenty of background. I'd really like to read the book, so i could get more into the story

Everything. He paused after every word and he read so slow like he had to sound out every word. I could have gotten used to his game show announcer voice, if he would not have read like a robot version of captain kirk.

I'm not sure, i liked the story, but i couldn't really get into it, the narrator ruined it.

The narrator reads at a normal pace during any dialog then returns to his choppy, super slow cadence for the narration. It was very distracting. I even checked my ipod to see if i had the audio books setting set to "slow"

Yes. It was pretty good and I liked the way the author gave some background to the characters.

There really wasn't a character that I liked the best.
I can say that Annie was my least favorite character. No one deserves to go through what she did in the end, but she brought so much of it on herself. Through it all she never grew on me like some characters do. I just can't get attached to a character that can switch "values" so quickly.

Who would you have cast as narrator instead of Tracy Thibodeaux?

I would have cast Scott Brick.

I want to say that narrators make such a difference between an okay book and a great book......or a great book and a bad book. If the narrator didn't sound like he was a 1st grader reading out of a book during the narrations....I would have really liked him.
He did well with the voices, but definitely not the narration. At times it was like fingers on a chalkboard.
I would like to see this author succeed because he does write a good story.

This was the one of the most ridiculous stories I have ever listened to. The dialogue was terrible, people just do not talk this way. The characters were so unbelievable. It was so bad it was almost funny. No one in the FBI could be as dumb as these characters. It story was not even in the realm of being possible no matter how much stretch your imagination. This was probably one of the worst books of all time.

Not a story by this author for sure.

The narrator was one of the all time worst.

BAD! BAD! Don't waste your time on this book.

Stunningly written, this captivating book is the definition of a 'page turner'. The whirlwind plot forces the reader (or listener) through a maze of thrills and frights at a perfect and balanced pace. Thoughtful and carefully crafter characters are littered throughout the novel, with seemingly none of them safe from Nameless.

Nearly 20 hours of my life I will never get back!

I can't imagine who might enjoy this book, a less than average story with gaping inconsistencies - what happened to the dog? All made farcical by the terrible narrator. Do not waste any of your life listening to this book.
A good narrator can make even a poor book enjoyable but this was only a poor book made worse by bad narration.