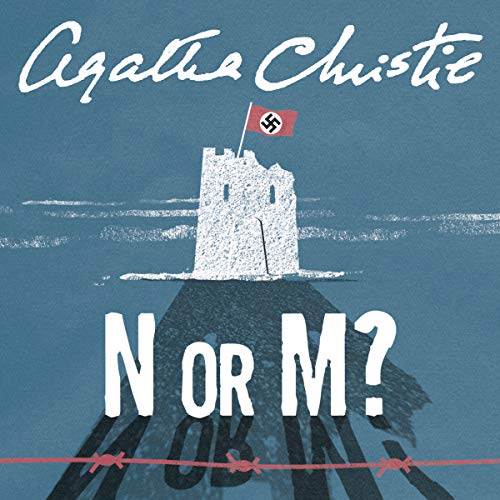 It is World War II, and while the RAF struggles to keep the Luftwaffe at bay, Britain faces an even more sinister threat from "the enemy within": Nazis posing as ordinary citizens.

With pressure mounting, the Intelligence service appoints two unlikely spies, Tommy and Tuppence Beresford. Their mission: to seek out a man and a woman from among the colourful guests at Sans Souci, a seaside hotel. But this assignment is no stroll along the promenade. After all, N and M have just murdered Britain's finest agent.

"As ingenious as ever." ( Guardian)

I'll admit at first I was disappointed at Hugh Fraser's narration thinking it dull and textbook like. But he does the tones and emotions of the mantly characters very well. The story of course is captivating

This is definitely not one of her best plot lines. It is very much a dubious and implausible spy story.
But Hugh Fraser is a great narrator and its well worth listening to.

This is one of the 'Partners in Crime' stories involving a sleuthing couple formerly employed by the British Secret Service during the First World War and here re-recruited to help flush out a Fifth Column conspiracy during the Second World War. It's an engaging story with twists and turns and a surprising denouement. As usual, Hugh Fraser does sterling service as the reader cleverly changing the pitch and accent of his voice to convince as young or old, male or female, Irish, English or German. Thoroughly enjoyable

Great story well read as always. Story flows well and characters are all in keeping with the period.

Great story, easy to listen to. Likable characters and I didn't guess who the villains were.

Full of twists and turns, keeps you wanting more

Not quite as light as the previous tommy&tuppence, but they're funny, clever and in love.

I laughed out loud in places, though probably at things that Agatha Christie did not intend to be comical ... my favourite character was Betty (naturally) and I thought that Hugh Fraser was a perfect narrator ... no doubt I shall listen to this again ...

I enjoyed the story - had guessed one of the two villains in advance but the other one fooled me. The Tommy & Tuppance stories are new to me and I was initially surprised at the time gap between books two and three, but actually the premise of them feeling too old to be useful in WWII and seeking excitement again worked really well.

The icing on the cake was the narration. Hugh Fraser's range in this, from babbling toddler to the breathless monologue of a nervous eye-witness, is incredible. I always enjoy listening to his voice but thought this one was particularly well acted.

I’m a huge fan of Agatha Christie and have only recently discovered the Tommy and Tuppence series. I think this is book 2 or 3 and I have listened to the others. N or M? was another great mystery with a bit of suspense . What makes it though is the wonderful reading by Hugh Fraser. He does the voices of the characters perfectly and is incredibly soothing. Well worth every penny.

I love the Tommy and Tuppence series, more action in genre than Christies more notorious works but full of her trademark twists and turns. Hugh Fraser narrates this book excellently.

I read N or M? when I was at school but haven’t really bothered about Agatha Christie since - '68 rather changed cultural focus. While my parents and grandparents who lived through the 14-18 and 39-45 wars were still alive, those conflicts almost seemed like events I half-remembered, at least till the world became, like TV, in full colour rather than black and white, with ‘68 and university.
Hugh Fraser performs Christie very well and brings new life to the old tired stories. I certainly wouldn’t read them again- so many books I want to read before I die! - but listening is another matter. Like a child I like familiar predictable (not the villain, the format!) tales at bedtime.
For once Christie seems to take a war seriously in this book, although in later novels it goes back to being some sort of good clean fun, like shooting lots of big game and despising anyone who isn’t English, and even most of her compatriots.
I like Tuppence, who isn’t wet like most of Christie’s women, the married or marriageable ones, anyway. I like the repartee between the Beresfords, but found it a bit callous in the first book. A defence mechanism, no doubt, in the aftermath of the Great War, but still jarring - my grandfathers and their peers didn’t think of WWI as even faintly amusing- and there’s not much shallow laughter reconstructing a life in 1918 minus most of one leg if you were from a peasant background.
This book was first published in 1941, set in 1940, when WWII wasn’t going too well - France had fallen and the UK & Commonwealth was alone. Germany and the USSR were still in alliance and Japan hadn’t forced the USA to take part.
As is well known, many powerful or aristocratic people had favoured Hitler before the war (the Daily Mail was a potent influence on the Fascist side till the outbreak of war) and many quietly or not so quietly continued to think he was a really good guy...Had he conquered the UK, he’d certainly have found stout collaborators, in high places, just as in France and elsewhere so there’s no reason to feel superior as nations to those who were under Nazi rule.
The fear of “fifth columnists” was justified, though exaggerated in the popular mind (bearded nuns, clergy - RC of course - anyone with Irish or other ancestry not the “right” sort of Anglo-Saxon!)
Christie manages to be less xenophobic in this novel written in times of extreme national danger than in most of her œuvre. She isn’t nasty about Jews, doesn’t lambast the occupied countries for their lack of true Anglo-Saxon grit, even considers the “lower orders” in the war effort as worthy citizens.
I can well understand that she was investigated briefly by MI5, after calling one of the suspected traitors “Major Bletchley”, shortly after she talks about those working on ciphers and de-coding as inclined to madness. As the book was published first in the USA, it was probably too late to eradicate this “innocent” nomenclature without revealing that “Bletchley” was TOP TOP SECRET! (Was it just a coincidence? Another Christie “enigma”?)