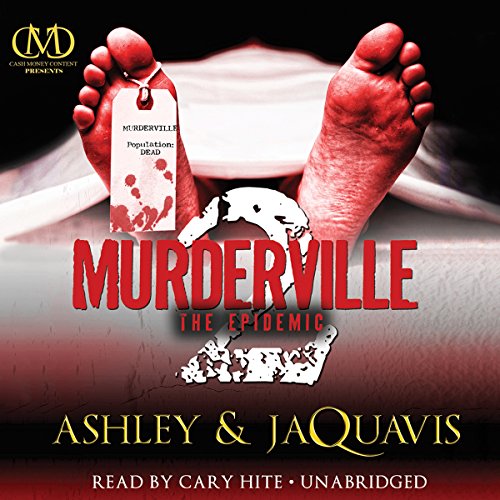 New York Times best-selling authors Ashley and JaQuavis are back with the second installment in the epic Murderville series. Love, murder, loyalty, and money fill this hood tale as they continue this international street saga.

With Samad’s target on her back, Liberty must survive the harsh streets alone. But when a chance encounter pushes her into the arms of a new friend, Po, the two take on the California kingpin - and step full force into the game. As bullets and sparks fly, the unlikely pair embarks on a serendipitous journey back to where it all started: Sierra Leone. With a new overseas connection, Po sees an opportunity that is too good to pass up. When his pursuit of the American dream conflicts with Liberty’s past, will they be able to survive, or will the drug empire that they’ve built together come crashing down?

Ashley & JaQuavis are the New York Times best-selling duo responsible for the popular Cartel series. They live in Flint, Michigan, where they are working on future projects.

©2012 Ashley & JaQuavis (P)2012 Blackstone Publishing, and Urban Audiobooks
"Their work has been regarded as some of the premiere titles that have led the way for this growing phenomenon of gritty tales." (Urban Book Source, praise for the authors)

I loved Murderville it was my favorite book, but I must say that this may be my favorite series. This duo has an awesome collaboration of thoughts and the way that these two have put together this tale is SIMPLY AMAZING! I loved how the authors showed their readers so many different aspects of the way that people really are, and if you think about it we come across these type of people in real life. Loyalty, greed, betrayal, power conflicts, coniving, deceit are the root of all evil and sometimes can be someones true character and nature and you may not even recognize it until it's too late. I think my fave character in the book is Rocoe he was a true soldier who was real; the true definition of a true friend/ ride or die. One thing that I also liked about the book is how the authors show us how hard it is to mentally let go of people who have truly touched our hearts but remain a part of our souls. Also, you never know who to trust because some people aren't the people they portray to be, even family will stab you in your back to get what they want. This book was amazing I still love Liberty and miss Ashai'. The end of the book had me pulling my hair out cause I want more more more I can't wait to hear part 3 I know that it will be captivating. Cary Hite is off the chain with his narration capabilities the best narrator for the series. Please beware there's very descriptive sexual content, violence and harsh language in this book that I LOVED but some folks may not. I can't wait til book 3 cause Dahlia is a bad mamma jamma. WOW what's next!

The authors of this trilogy should be called the DYNAMIC DUO, can't wait for book 3

What was most disappointing about Ashley and JaQuavis ’s story?

I felt like they just got lazy. At times they literally copy and pasted they exact word for word chapters from the previous book.

Rocko - he needed his own book.

Anger, I was angry how stupid Liberty could be. After all she has gone through in life and the girl just don't learn from her mistakes. You would think she was be up on game but nope.

some things just dont add up

Would you try another book from Ashley and JaQuavis and/or Cary Hite?

Yes, Anything Cary Hite narates I am interested in reading. He reads with animation and distinction. However I need the authors to keep track of the details they put into their books. There are instances in the book that dont add up later on in the story... it just puts a bad taste in your mouth. Especially when listening to a book because its easier to remember details. Birth control... pregnancy.... really?!??!!? Then when did Shawty become a drug addict? This info was randomly thrown in there to complete an idea. This particular story read like a bad conversation on the phone... it starts out juicy full of details and then the person on the other end gets distracted and rushes you off the phone. BLAH.

Has Murderville 2 turned you off from other books in this genre?

no. I will continue to read/ listen to these books... even their books. But I just know I cant trust whats going on in the tory to be reliable.

I DONT REMEMBER. I LIKED THEM ALL.

Do you think Murderville 2 needs a follow-up book? Why or why not?

I THINK IT SHOULD BE RE-RELEASED... AND YES a follow up after.

What was one of the most memorable moments of Murderville 2?

Dahalia and her evil ways.

I love all the characters but Trixie was my favorite lol

Can you say twisted?

This book is loaded with twist and turns! I loved it! It kept me drawn into each of the characters. Can't wait to read the third story! This is a must read for sure!

Where does Murderville 2 rank among all the audiobooks you’ve listened to so far?

What other book might you compare Murderville 2 to and why?

Continuing with the trilogy reminds me of "The Cartel Trilogy"!!!!!!

No one scene was my favorite...enjoyed the entire book!

If you could rename Murderville 2, what would you call it?

Ashley and Jaquavis need to link up with a producer and make this into a real movie!!!

Would you try another book from Ashley and JaQuavis and/or Cary Hite?

I love A&J, but all of their books are the same. There was NO reason to drag this into a series. They could have gave Liberty a happy ending in book one, and wrote an entire different book about Dahlia. THAT would have been more interesting. Instead, these harden criminals who are supposed to be so smart are tricked into stupid situations beliveing this chick they barely know. I think NOT! Snoozefest!

Im moving to a romance novel. All of these gangsta stories are the same. I need a break!

I LOVE LOVE LOVE him! He is the best narrator Ive heard so far, out of all the books ive listened to. He's great. The material just wasnt right.

NO! Shouldve stopped at book 1. Enough with the series. Put all the thrills in book 1 and move on!

Didnt HATE it, but it is defintely lackluster. Basically the prada plan from the motherland. I cant deal. Read something else!