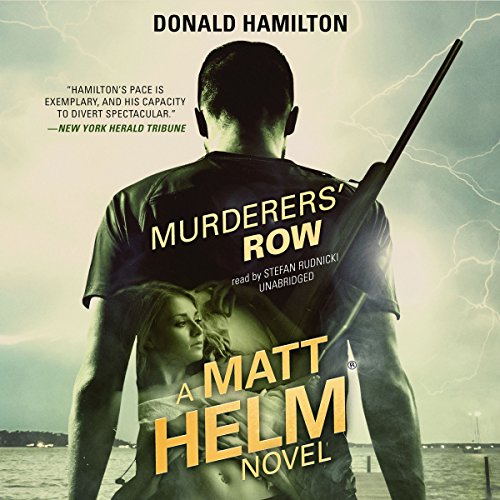 Professional assassin and counteragent Matt Helm has been given a distasteful assignment. He is to disguise himself as gangster Jimmy "the Lash" Petroni and assault a fellow agent in order to help establish her cover in a top secret operation. But things don't quite go according to plan, and now Helm must take her place on a dangerous mission. Alone in Chesapeake Bay, pursued by his own government, Helm must carry out an assassination - before his employers catch up to him.

My Least favorite of Matt Helm SO FAR.

Where does Murderers' Row rank among all the audiobooks you’ve listened to so far?

Near the bottom with Cardinal of the Kremlin. Its good. But none of the characters were interesting (except matt) and the tale itself just didnt grip me. It lacked the BEAUTIFUL tension of the other Matt Helm books ive read so far. It brought up some interesting changes in pace from the other books but it just wasnt great.

Would you recommend Murderers' Row to your friends? Why or why not?

No, I would suggest starting from the beginning of the series. It is hands down my least favorite one so far and has none of the magic from the other books before. The other books have themes of dire clutch moments, Matt's pragmatism and smart, simple and believable unfolding of the plot. This book had these things but it didnt shine like the other installments.

Yes. Just as amazing. He is a fantastic Helm and doesnt sound too silly when trying to emulate the women. His Helm voice tends to melt with some other lesser characters but it's few and far between and quite forgivable.

There is a part where Matt get's grabbed and he recalls another character's injury. That shook me up because they did such a good job of painting a picture of the injury earlier. So the thought of it hit me like it hit Matt. Excellent.

By no means bad it just didn't wow me. As a stand alone it's lackluster. As part of the series it's a low point. I get that it was suppose to be different and the differences in tone are crucial to a big part of the story.

I've read several of the Matt Helm books, and while the plots change, they are all basically the same. I compare them to Jack Reacher books, in that Matt Helm and Jack Reacher are smart and very logical. They think things thru carefully and solve the "mystery of the book" thru guile and logic, rather than brute force or some superpower. Much of the book takes place inside Matt's head, and Stefan Rudnicki is outstanding as the narrator and Matt's inner voice.

These are not what I'd call great books, but they are enjoyable mysteries, and most of them aren't much more than 5 hours long. I got them all as free downloads thru the Audible Plus benefit to my Audible membership. (I would not purchase or spend a credit on a book that short.) I listen to a lot of audio books, and I periodically fill in between books with a light-hearted and witty Matt Helm book. I will continue to do so.

having read and reread the book, this reading of the book series is really well done, maybe a mistake here and there, but if there actually is a mistake i haven't found it,Michael caine said he memorized all the scripts by going over and over a thousand times, this reading of the series seems to be really gone over the same way, because the readings are so well done!

Really enjoy the series, but the word rape have changed a lot in meaning since then, any way it can be replaced with something suitable to our time, like ravage?

Matt Helm aka “Eric”, cover story: James A. Peters, Atlas Enterprises Inc., a “reactivated” counter-agent, aka assassin. If someone dug deep into the records they would find another alias, Jimmy “the lash” Petroni. The lead professor on a top-secret project is missing. The project; Airborn Underwater Detection Apperatise (AUDAP). A slick device that can aid the U.S., or our enemies, in locating nuclear submarines. A questionable plan is rushed into operation to locate the professor before the enemy has time to extract the information in his head. Jean, a skilled operator, will play the role of an agent suffering from traumatic disorders, turning to alcohol to escape the feelings. The taking of lives in her role as a covert operator has lead her to a psychological breakdown. The idea is for Jean to publically display the effects of her emotional and mental trauma along with the alcohol dependency, baiting the enemy to kidnap her for interrogation. The hope is that she will be held captive in the same location as the professor. To further this crazy plan, Helm is to “rough up” Jean to make the ploy convincing, to the extent of breaking a limb. So much for the setup of the story. Yes, this is just the setup, but there is much more to come. Helm’s first strike causes Jean’s legs to tremble and she collapses. Later, Helm has another altercation with a young agent who in anger, tries to clobber him with a club, and Helm retaliates. These two incidents worry Mac, Helm’s handler, and he orders Helm to come in. Helm refuses of course and continues with his mission. He uses his Petroni cover to reveal who is behind the kidnapping of the professor and what their plans are. Helm remembers what Mac had told him at the briefing, “How to achieve this result is left entirely to the discretion of the agent on the spot. Do you understand?” Helm realizes what he must do. This may be one of the most dramatic episodes of the Matt Helm series. I’ve enjoyed this story and will continue with more of the series. Maybe when this is over, Helm will be able to visit his girlfriend, Gail Hendricks in Texas.

Matt inadvertently kills another agent. He begins to doubt himself after others get hurt. He sets out to prove himself by going against orders to complete the dead agents mission. He has to do a little soul searching to determine if this line of work is for him.

Definitely Not the Movie

Not a bad story for the time it was written. Can’t expect all sorts of super spy stuff in these books since they tend to pre-date the later super spy movies. Story is a bit simplistic, but it gets there.

One of the best Helms

Having listened to quite a few Helm books this is one of the good ones. It seems shorter which makes the pace seem better. A good story and better characters than most.