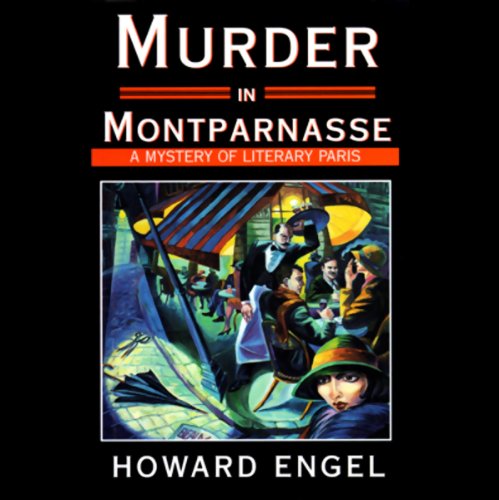 Murder in Montparnasse: A Mystery of Literary Paris

It's Autumn, 1925, and a killer uncannily like England's Jack the Ripper is stalking the streets of Paris and preying on young women. Michael Ward is a journalist newly arrived to the Left Bank.

When he falls in with Jason Waddington, an expatriate American writer who introduces him to the cafe scene and his crowd of writers and artists, Ward soon discovers that Jack de Paris is not the only trouble afoot in the City of Light. Rumor has it that Waddington has written a damaging roman a clef about his friends, and tempers are rising as fear of the killer grips the city.

When the body of Laure Duclos is found, it seems their circle has finally been touched by Jack. But Ward has his doubts, and begins to wonder whether Laure was truly Jack de Paris's latest victim, or if someone else was using the serial killer as a convenient cover to protect themselves.

"Engel relies heavily on dialogue to push forward his plot, with plenty of intoxicated cafe talk thrown in, and his characters should please fans of the era: Waddington bears a pointed resemblance to Hemingway, and many other players are loosely based on notable writers or their famous fictional creations. Engel's descriptions of Paris in the '20s are charming, adding to the fun of the gambol he provides through the Left Bank and its denizens." (Publishers Weekly)

I appreciated the author's attempt to set an entertaining murder mystery in the community of Lost Generation American expats. It was fun to "read" about Hemingway's Paris in the 1920s, but that was also what ended up annoying me just a little -- pat references to Alice B. Toklas' dog, a Brett-like Brit named Biz, the drinking and doping in Montparnasse bars, even le Trou dans le Mur. It was not a waste of time at all, just an OK murder mystery.

Engel has written an entertaining mystery, and evidently had great fun doing so. The style is Hemingway, Isherwood and Waugh meet Agatha Christie. The characters seem determined to drink Paris dry or perish in the attempt. Painters, poets, writers and drug dealers rub grubby shoulders in the cafes. A murderer is killing artists models, and a visiting Canadian journalist decides to solve the case. There is a suitable twist in the tail. A really good listen, very well narrated.

Well narrated but only a so-so mystery

This book has some interesting atmosphere of 1925 Paris but the mystery is only okay. The murder method was clever and the motive was suitably literary. Many descriptions of nights of drinking and types of drinks. The characters are thinly veiled versions of Hemingway and his characters from The Sun Also Rises.

The narrator was fine for this book, with a fairly wide range of voices. The content of the book was often overly descriptive, to the point of sometimes seeming trite. Too many big names were dropped with no real reason for them appearing in the book at all. It often felt like the author was trying too hard to convey what they meant.