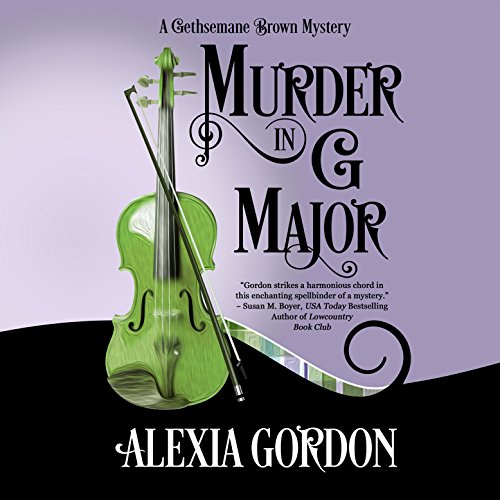 With few other options, African American classical musician Gethsemane Brown accepts a less-than-ideal position turning a group of rowdy schoolboys into an award-winning orchestra. Stranded without luggage or money in the Irish countryside, she figures any job is better than none. The perk? Housesitting a lovely cliffside cottage. The catch? The ghost of the cottage's murdered owner haunts the place. Falsely accused of killing his wife (and himself), he begs Gethsemane to clear his name so he can rest in peace. Gethsemane's reluctant investigation provokes a dormant killer and she soon finds herself in grave danger. As Gethsemane races to prevent a deadly encore, will she uncover the truth or star in her own farewell performance?

This is an entertaining and humorous book. I really enjoyed the characters and the setting the Alexia Gordon created. I look forward to the next book and I hope it's soon.

I love cozy mysteries, but this is more like a mystery a junior high girl would enjoy. The plot and characters are cartoonish. Also, a major part is supposed to be Gethsemane getting the youth orchestra into shape for a contest. For the most part this is ignored. I wonder how much of a music background the author has. Also, the ending is unsatisfactory, leading on to the next book. However, I will not purchase the book just to see what happens to the ghost.

It’s a long story how I came across this book. It’s a bit ironic so I’ll discuss later in this review. Before I started listen to this book, I didn’t realize the main character was an African American woman. So why did they cast a white actress??? Here’s the irony. I selected this book because, after this first novel, the following novels are read by Helen Duff, who is ALSO a white actor! Say what?! Are there not thousands of talented black American and British actors who could have been selected?! So bizarre!

And here’s what’s equally ironic. While I adore Helen Duff, she does a terrible American accent and this first reader was quite good. We’ll see how the future novels go. I’m a little skeptical now.

Gethsemane Brown is a delightful character. While the story was a bit silly at times, it was fun! I listen to a lot of dark novels and podcasts so it was a nice respite to enjoy a bit of levity.

Read for the 2018 Book Riot Read Harder Challenge, for the category "A mystery by a person of color or LGBTQ+ author."

This cozy mystery is a solid debut novel. I thought the small-town Irish characters were well done, and the suspense was very good. I liked the ghost! This would be a great TV series, I would totally watch it. There's not a wide range of emotion here, mostly Gethsemane is being headstrong. I think a wider range of emotion would make her feel more real, instead of relying on banter. BUT the banter is good. I also wish she could find a female friend, there are way too many dudes in the picture...and all the women in town are NUTS. 3.5 stars.

I listened to the audiobook and WOW that's how you pronounce Gethsemane, huh? Good to know. The reader did the loveliest voice and accent for Eamon. Her American accent was decent except for the word orchestra, which Gethsemane pronounces "awkestra".... that word is in this book a lot, so it's kind of funny. It didn't really bother me.

Being an ex-pat on the “Emerald Isle,” the land of leprechauns, pubs, and whiskey, seems a dream fulfilled, but Alexa Gordon’s heroine finds an empty pot o’ gold at the end of this rainbow. Gethsemane Brown, thirty-six-year-old ex-pat in Dunmullach, Ireland, a talented musician with a doctorate from Yale, has taken a position at St. Brennan’s School for Boys as a teacher of general and instrumental music and conductor of the honor’s orchestra. This wasn't the job that she sought, but that job went to the conductor’s mistress. However, she refuses to return home in defeat; she would rather be unemployed or teaching at an out-of-the-way boys’ school, than deal with the criticism of her mother and sister. But, things go from bad to very bad when her luggage is lost and her money stolen; then very bad to worse discovering she has six-weeks to turn a mediocre boys’ orchestra into competition winners; last, worse to worst when she discovers she has an unusual roommate at the quaint Carraigefaire cottage in which she resides…the ghost of her musical idol long dead for twenty-five years in a murder/suicide. How could anyone pass up on this engaging tale!

Ghosts? Although telling people that the infamous Eamon McCarthy is “dead and well” and living in the cottage with her might garner some sympathy, she can't risk looking the fool. However resistant to even acknowledge her non-corporeal companion, he pleads with her to help uncover the truth and hopefully allowing him the opportunity to move on. He would not have murdered his wife Orla, and suicide? Never! So, in between her music classes, efforts to turn prankster boys into an award winning orchestra, navigating small town gossip, and trying to discover what McCarthy’s nephew is up to concerning the cottage, she investigates incompetence in the Gardaí (Irish police), missing evidence, another cold case link, and a few more curious deaths.

Wow! Totally entertaining! So much to engage the reader beyond the cold case of a murder/suicide. Alexa Gordon has provided a clever twist with the ghost of Gethsemane’s musical idol asking for her help, but it isn't juvenile hocus-pocus…it works! It works as an endearing friendship and love of music and…whiskey. A very engaging mystery reminiscent of any Agatha Christie tale, clever twists and turns adding possible suspects and motives, excellent descriptions and dialogue including several intriguing musical references, entertaining characters with some really, really quirky figures, and plenty of gossip, pranks, and banter to bring about a smile.

I chose to listen to the audio version of this story enriched by the voice artistry of Jessica Carroll. She goes well beyond the traditional reading out loud to include a British accent for the third-person narrative, an excellent American accent for Gethsemane, and a plethora of entertaining Irish brogues. Her talent gave voice to the emotions, personalities, young, old, female, but the male voices were lacking a bit…just a bit. No matter what version you choose, Alexa Gordon’s already engaging story is 5-star entertainment, and the audio version I'd give a big thumbs up! But don't stop here, there are two more books!

Excellent story. I’d heard of Gethsemane Brown but never read or followed up on her detective stories. So glad I found this one.

I enjoyed the book. I really enjoyed the readers and their Irish accents. I don't have the finest ear for that, but it was fun to listen. I dropped one star for the way this book ended. I won't give away the ending, but I was a little surprised and disappointed. It would appear that to really understand the entire story you need to commit to the entire series.

Loved the story. Really liked the main character, she didn't do anything ridiculously dumb like some characters do or rush into making snap judgements about the murderer without any evidence (a pet peeves of mine and something a shocking number of main characters do in mysteries).

I also prefer this narrator to the one used in the other books in the series. Though the other narrator is fine, she narrates like she's reading a romance novel, which is a little off-putting. This narrator has a really nice touch.

This is a superior mystery. Especially since its a cozy but has none of the pitfalls of the genre. Loved every second of the performance and story. Loved the main character and townsfolk. Buy. buy.

great book ; narrator not so much

I read this book when it was originally published and it quickly became a favorite series. It is rare to read about a Black, educated female protagonist in the cozy genre. Yes we do exist! I can't begin to tell you how disappointed I was with the narration. She made Gethesamane sound like a shrill east coast harridan. Read book one and switch to audio. new narrator who GETS the characters.