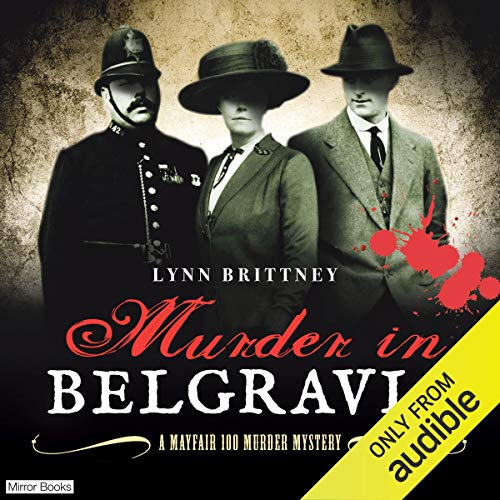 Set against the backdrop of WW1. Mayfair 100 is the telephone number for a small, specially formed crime fighting team based in a house in Mayfair.

London, 1915. Just 10 months into the First World War, the city is flooded with women taking over the work vacated by men in the armed services. Chief Inspector Peter Beech, a young man invalided out of the war in one of the first battles, is faced with investigating the murder of an aristocrat, and the man's wife, a key witness and suspect, will speak only to a woman about the unpleasant details of the case.

After persuading the Chief Commissioner to allow him to set up a clandestine team to deal with such situations, Beech puts together a small motley crew of well-educated women and professional policemen.

The wife of a war-damaged man is the only suspect in his murder. A police inspector puts together a unit of women and a couple of other cops to find the truth. The search leads them into London’s underworld of drugs and prostitution during World War I. The violence is brutal.

The writing isn’t bad and the mystery is well-conceived. Unfortunately it read like a 1920s political pamphlet. It begins with wife abuse and goes on to diatribes on child abuse, prostitution, and women’s rights. While I agree with the positions held by the author and main characters, if I wanted a sermon I’d read a book of sermons. The author seemed compelled to deal with every social issue she could think of, spending so much time getting in all the atrocities that there was insufficient space to really develop the characters. Speaking of which, who is supposed to be the main character here? There are at least half a dozen with the potential to be very interesting but the only one who really begins to come to life is young Billy, who recently joined the police force after being wounded in the war.

Maybe my reaction would have been different if this book hadn’t been recommended to me as a cosy mystery. There’s nothing cosy about it. Toward the end I listened at 1.25 speed just to get through it so I could write a review.

I choose this after reading other reviews. I enjoyed that a good story with interesting characters was told without a lot of violence and explicit sex scenes. Looking forward to the next book.

This was a great read. Strong professional women, good story that kept you guessing until the end. All of the characters were well thought out with varying personalities and depth. Although, the book was serious, there was quite a bit of humor thrown in. Can't wait for another book and another great adventure in crime solving!

I really enjoyed this story and looking forward to book two. It is about a group of people from different levels of society and occupations working together to fight crime in London during WW1. The narrator was excellent and the story was narrated without any of the histrionics that can sometimes distract from what would otherwise be a good story.
I will certainly purchase book two when it is published. Hopefully with the same narrator and the same full cast of characters especially the minor ones!!

A fun romp but vapid

Rather lightweight and predictable but well narrated. Characters amiable but a bit one dimensional. Can imagine this being a popular Sunday night tv drama like Heartbeat...

I wasn't sure about buying this book but I am so glad that I did. An absolutely gripping storyline infused with well drawn characters and performed in her usual brilliant way by Gabrielle Glaister. I couldn't stop listening and as I reached the end I was sad that it was over. Luckily this is the first in a series and I can't wait for book 2.

Takes you right into the period

Really enjoyable, well paced with a good balance of plot, lighter moments and the harsh side of life in this period.

Well written book with good characters
Of the time period, so well thought out
Narrator was really good drawing you in
Beautifully read

One of the best audio books I have listened to. It takes you back to London 1914. Will definitely be listening to book 2

I couldn’t stop listening to this book. Brilliantly written and fascinating insights into London in this era. A great detective story line and am going to look immediately for any other books on Audible of this series.

A good listen, good characters, with excellent narration. Gabrielle Glaister’s voice was easy to listen to with very good characterisation. The story was certainly of its time and kept moving right to the end.