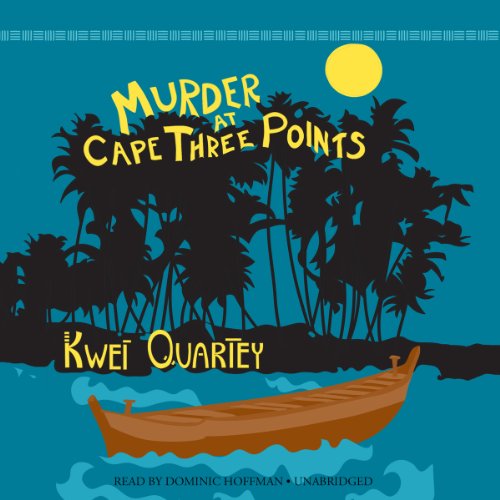 At Cape Three Points on the beautiful Ghanaian coast, a canoe washes up at an oil rig site. The two bodies in the canoe - who turn out to be a prominent, wealthy, middle-aged married couple - have obviously been murdered; the way Mr. Smith-Aidoo has been gruesomely decapitated suggests the killer was trying to send a specific message - but what, and to whom, is a mystery.

The Smith-Aidoos, pillars in their community, are mourned by everyone, but especially by their niece Sapphire, a successful pediatric surgeon in Ghana's capital, Accra. She is not happy that months have passed since the murder and the rural police have made no headway.

When the Ghanaian federal police finally agree to get involved, Detective Inspector Darko Dawson of the Accra police force is sent out to Cape Three Points to investigate. Pretty as the coast is, he is not happy to be sent away from his wife and two sons, the younger of whom is recovering from a heart operation. And the more he learns about the case, the more convoluted and dangerous it becomes. Three Points has long been inhabited by tribal villages of subsistence fishers, but real estate entrepreneurs and wealthy oil companies have been trying to bribe the tribes to move out. Dawson roots out a host of motives for murder, ranging from personal vendettas to corporate conspiracies.

It was well spent for the story but not the listening.

Not quite on the edge but it was a good mystery.

Would you be willing to try another one of Dominic Hoffman’s performances?

Not if he is doing a book from a cultural experience with which he is unfamiliar which seemed to be the case here.

Did Murder at Cape Three Points inspire you to do anything?

I want to read the 2nd book in this series.

This is my 2nd Darko Dawson mystery. The first was the first, Wife of the Gods. I read the hard copy for that one and enjoyed the writing as well although I thought the author could improve his craft overtime. I think he has with this one although as at least one other reviewer indicated it could have used some better editing. For instance, passages like "...she said sincerely" suggest the author does not trust himself to capture the mood and intent of the character through what he has already set up prior to and in the description of the scene. This one came at the end so perhaps he was rushing to finish. In any case, the story was a pretty good mystery that held the reader to the end. I heard an interview with the author about his love of American detective stories and it seemed to show up too apparently in the "Columbo" type tendency of Darko to always say "...and one more thing" as he is leaving an interrogation.

One of the reasons I am attracted to these novels is because they are set in Ghana West Africa, a place for which I am very familiar and have traveled to at least once a year for the past 15+ years. The novels do a great job of capturing the culture, history, and in this one in particular, the contemporary issues the people and country are dealing with. Although I have not followed how the country is managing its oil fortunes lately, I do know that it has experienced a boom in economic activity in the area near where the drilling is occurring and the author seems to do a very good job of weaving into the story the political and society changing dimensions of these issues. Indeed, one of the things I have liked most about both books have been the authors ability to "educate" the reader about the culture and challenges of the nation in a way that both entertains and humanizes the place. That is unfortunately very much needed in most writing about the people and places in the continent of Africa and the author should be greatly applauded for that.

What was most disturbing about the narration of the audiobook, and an issues that almost forced me to pick up the hard copy and read, is the considerable butchering of the language and names by the narrator. He is definitely not a native Ghanaian speaker (American accent), and, I would be surprised if he has even visited and experienced the people and language there. While most listeners are likely to not have done so as well, for those of us who have, it was painful to hear the repeated mis-pronuciations of proper names (People and Places) among too many other things. Frankly, I think it borders on a level of disrespect for the work; not on the part of the author (I don't know how much influence he would have had in the audiobook performance) or the narrator; but on the publisher which should have done a better job of confirming the authenticity of the narration. For me, it is an extremely important dimension of an audio reading and for this to be so badly done was, I repeat, disturbing.

So, I say get the book, not the audiobook, and enjoy.

This mystery stars a Ghanan detective. I expected the narrator to use a Ghanan accent but instead I listened to a white American one. I think this took some flavor away from the story.

Great who done it. Love the graphic description of the Country its people and even the food.