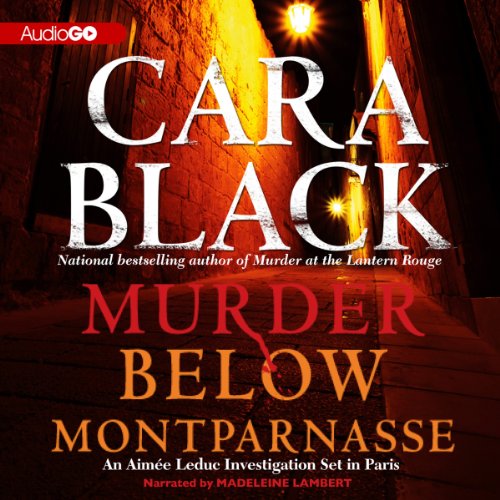 A long-lost Modigliani portrait, a grieving brother’s blood vendetta, a Soviet secret that's been buried for 80 years - Parisian private investigator Aimée Leduc's current case is her most exciting one yet.

When Aimée’s long-term partner and best friend Rene leaves their detective agency for a new job in Silicon Valley, Aimée knows she can handle the extra workload. At least, that what she tells herself...repeatedly.

But all bets are off when Yuri Volodya, a mysterious old Russian man, hires Aimée to protect a painting. By the time she gets to his Montparnasse atelier, the precious painting has already been stolen, leaving Aimée smelling a rat. The next day, Yuri is found tortured to death in his kitchen. To top it all off, it looks like Aimée isn’t the only one looking for the painting. Some very dangerous people are threatening her and her coworkers, and witnesses are dropping like flies. Now Aimée has to find the painting, stop her attackers, and figure out what her long-missing mother, who is on Interpol's most wanted list, has to do with all this - fingers crossed she wasn't Yuri's murderer, despite clues pointing in that direction.

One of the many reasons I love Cara Black's novels which take place in Paris, is that it brings back wonderful memories and allows me to actually visualize her settings. I spent several months a year in Paris, and had become accustomed to her "in" way of doing things. Another reason was that I liked the mysteries and story line, which in the past were brought to life perfectly by a great narrator, whose French accent and pronunciation were right on. It was like having a mini-French review with each book, and learning more slang. I also learned even more about Paris, which seemed impossible.

Not with this book, however. It still has a great story line and offers great visual insight into Paris haunts, habits and customs, but not pronunciations of the French terms she uses repeatedly in all her books. They are continually mispronounced in French, or pronounced here as one would in English. It is terribly distracting. The French word "frison" is pronounced "freezone" (accent on the last syllable), not "frishin".

The second thing that was irritating about this narrator was that she read so fast! I had to keep checking my iPhone to make sure the speed was set correctly at 1x. It was.

The third in many of the irritating qualities of this narrator was that she could not vocally characterize men. Morbier sounded ridiculous, the young kid intern sounded as if he had a cold, and every other male was cartoonishly voiced. Why change narrators?

In short, this book would be better read than listened to, with this narrator. I don't follow the plot closely due to her hurried mutilations.

Cara--please write more books, but PLEASE go back to the former narrator!!

What would have made Murder Below Montparnasse better?

This is the first time I have noticed the narration of any audible book to be distracting, and this one is horrible. I don't care about how the French is pronounced, but there is something very inappropriately sing-song about this narration. At first I thought the author might be reading the narration, but this is a professional? I think this is one I will have to return and buy the kindle version. Sadness. I am guessing the story is okay, thus the 3 stars, but don't get this in audible format.

Would you be willing to try another book from Cara Black? Why or why not?

Yes, she is a good writer

Anger, how to ruin a perfectly good story with bad narration

You have been warned.

the story is weak, but the worse is the performanc

Would you try another book from Cara Black and/or Madeleine Lambert?

no, specially not with the same reader

Would you ever listen to anything by Cara Black again?

may be a good actress, or a good story reader.

I could not finish it. The narration was trite, full of voices so false sounding that they belonged in characters in a Disney cartoon.

What disappointed you about Murder Below Montparnasse?

Bland story with a particularly weak read. Sorry, but these characters, even when somewhat differentiated, came off as very cliche as an audiobook. I wonder if this is the case where the written word would have been better

It isn't obvious whodunnit and the setting is of course interesting, Paris loving francophiles are surely the target audience here and I consider myself one.

If you could play editor, what scene or scenes would you have cut from Murder Below Montparnasse?

The whole silicon valley angle is atrocious, it is so trite that I cringed through each stereotypical moment.

By an order of magnitude, the worst vocalization I've encountered on Audible. I've heard good things about this series, but just couldn't get past the first hour.

I did not finish this read because the narrator's voice and her feeble attempts to sound like different characters were so Nothing. I can't say if the story was any good because I just couldn't listen to another word.

Sorry, guys. But casting is way off base. This narration is too American. I don’t have at hand the name (s) of previous narra

This narration sounds too American middle class. No European flavor. No nuance. I feel as if I should get a refund. Could not listen beyond the first few minutes .

As usual, I love the story and the characters, and the sense of place. I have read all of the series.

This is the first negative narration review I have ever given. After listening to about 10% I decided to forgo anymore narration and just stick with reading. The narrator did not do voices well and her French was abysmal. I found it very distracting and unsatisfying. After deciding to do this, I opened the info page and checked and found that the narrator was different from the first 10 or so. She really brought Aimee to life and represented Paris and the many characters well.