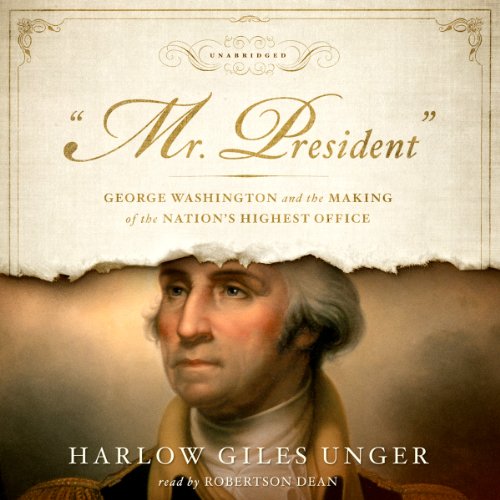 Although the framers gave the president little authority, Washington knew whatever he did would set precedents for generations of his successors. To ensure their ability to defend the nation, he simply ignored the Constitution when he thought it necessary and reshaped the presidency into what James Madison called a "monarchical presidency." Modern scholars call it the "imperial presidency."

A revealing new look at the birth of American government, "Mr.President" describes George Washington's assumption of office in a time of continual crisis, as riots, rebellion, internecine warfare, and attacks by foreign enemies threatened to destroy the new nation. Drawing on rare documents and letters, Unger shows how Washington combined political cunning, daring, and sheer genius to seize ever-widening powers to solve each crisis.

In a series of brilliant but unconstitutional maneuvers, Washington forced Congress to cede control of the four pillars of executive power: war, finance, foreign affairs, and law enforcement. Then, in the absence of Congress, he sent troops to fight Indian wars, crush tax revolts, and put down threats of secession by three states.

Constantly weighing preservation of the Union against preservation of individual liberties and states' rights, Washington assumedmore power with each crisis. Often only a breath away from reestablishing the tyranny he pledged to destroy in the Revolutionary War, he imposed law andorder across the land while ensuring individual freedom and self-government.

Harlow Giles Unger has written an excellent study into the seven pillars of power that the US President has thanks to George Washington. Although I think his generalship was dubious at best, his political thinking, manoeuvring and strategy especially after the War of Independence is well worth the study. Although they do mention the weight in later years, the arthritis and false teeth I was disappointed no ice-cream was mentioned. Never the less if it wasn't for George, I doubt if the USA would be what it is today.

I found this to be very interesting and informative. Any student of history or just people who are curious should find this interesting. It paints a fair picture, not leaning towards too much praise or condemnation. I was surprised at several things that happened to Washington resonate with things happening now. The narrator did a fine job with the material.