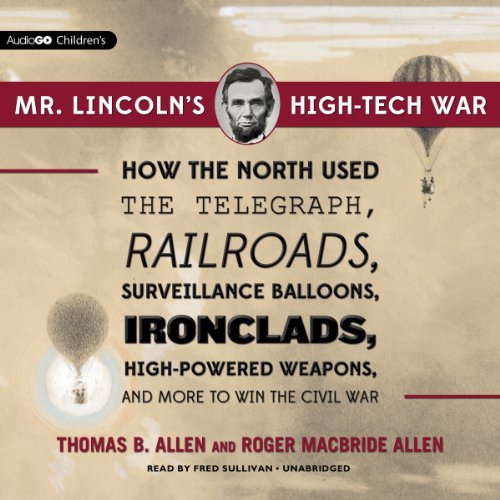 Thomas B. Allen’s expertise in military history and strategy is combined with Roger MacBride Allen’s knowledge of technology to reveal a lesser-known yet fascinating side of the 16th president of the United States. Their authoritative narrative reveals Lincoln as our nation’s first hands-on commander in chief, whose appreciation for the power of technology plays a critical role in the North’s Civil War victory over the less-developed South.

We meet Lincoln as he exchanges vital telegraph messages with his generals in the field; we witness his inspection of new ship models at the navy yard; we view the president target shooting with the designer of a new kind of rifle; and we follow Lincoln, the man of action, as he leads a daring raid to recapture Norfolk, Virginia. The book’s historic sweep also sets Abraham Lincoln in the context of his military era: We learn about the North’s Anaconda Plan and the South’s counter strategies and how the concept of total war replaced the old Napoleonic way of fighting. Listeners will come away with a rich sense of a leader who lived through one of the most exciting ages of technological and social change in America. Mr. Lincoln’s High-Tech War brings alive a time when the railroad brought soldiers to and from the battlefields, when hot-air balloons were used for surveillance, and when ironclad warships revolutionized naval warfare.

©2009 Thomas B. Allen and Roger MacBride Allen (P)2013 AudioGO
“The lively, well-researched text makes it clear that Lincoln grasped the concept of ‘total war’ and did not hesitate to exploit the latest know-how to ensure victory…this book is a vital addition to the Lincoln shelf and an exceptional and novel approach for students investigating the Civil War.” ( School Library Journal)
“Well researched and clearly written, the book discusses the course of the Civil War in terms of the development of new technology, from the ironclad and the submarine to the rapid-fire, repeating rifle and the use of railroads to carry troops and supplies…readers whose knowledge of the Civil War comes from historical novels and battle-by-battle historical accounts will gain a fascinating perspective on why the war progressed as it did and how it was ultimately won.” ( Booklist)
“It is difficult to imagine a reader not finding something worth learning from this book.” ( VOYA)

This is a fair rendition of the Civil War

However this summer I’ve completed Team of rivals,Clouds of glory and Personal memoirs of Ulysses S Grant.
I was looking for more information about the telegraph. I didn’t really find it.

YA well-couched intro to the Civil War

The authors use the concept of "high-tech" to capture the attention of YA and slightly younger readers while introducing them to the names, battles and chronology of the American Civil War. It is age (middle grades?) appropriate in the level of detail and depth of analysis -- and yet interesting enough to hold the attention of this adult. And, no, the book is not dumbed down; it covers a lot of ground in a short amount of time, giving out a lot of facts, names, dates, locations (but no quiz at the end, so don't worry). It is more narrative and action than it is analysis.

Narrator Fred Sullivan has done an excellent job here. The pronunciations is clear and correct (especially proper names); the pacing is slow enough for young ears to digest but not so slow that they are bored.

For those trying to decide if this book is appropriate for their young readers:
What the book does include: battlefield statistics (numbers of deaths and casualties are mention for a couple of the battles); discussion of various firearms; mention of slavery as one of the reasons why the war was fought (but no discussion of the institution itself); the fact that civilians rode out to the battlefields to watch the various battles. This is a military history and the idea that soldiers died is not avoided but details are not provided.

What the book does not include: in-depth discussion of why the war was fought or in-depth analysis of the political and economic positions of either side. That is not the purpose of the book. There is no bullet by bullet description of the battles, no blood and guts. No guided tours of the military hospitals. Nonetheless, the book is aimed at an audience that already understands that in a war, people die; that the goal of a battle is to defeat the other side.

Not quite what is promised on the cover

The technical analysis is a little fleeting, repetative and rarely in detail. There are some well done summaries of major events in the American Civil War and the analysis on the use of balloons was genuinely illuminating.