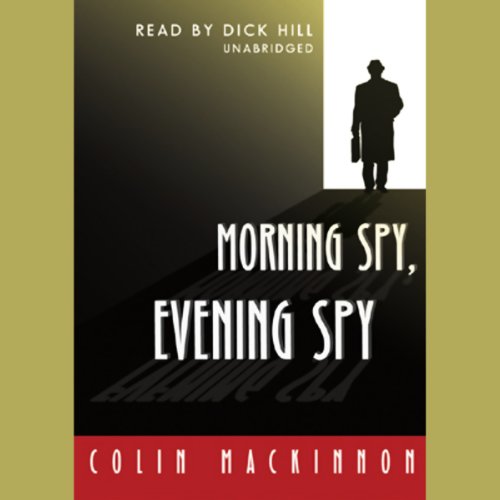 An Afghan resistance fighter of the 1980s, once on the CIA payroll, has come back to haunt the agency. Kareem has become an enemy who works with al-Qaeda and the Taliban. He has arranged the murder of an American CIA agent in Pakistan, which may compromise an intricate, long-planned CIA operation to capture Osama bin Laden.

CIA officer Paul Patterson, who had "run" Kareem as an agent during the Soviet occupation of Afghanistan, sets out to track him down. Patterson navigates a shadow land of intrigue in England, Africa, the Middle East, and the United States, where truth and lies seem to merge.

Colin MacKinnon, praised by the New Yorker for capturing "the le Carré manner", breathes life into historical fact with this gripping, fast-paced novel about the search for bin Laden in the months leading up to 9/11.

"Mixing fact and fiction effectively, MacKinnon...shows great insight into the inner workings of U.S. intelligence. His clipped prose style, descriptive discipline, and tone-perfect dialogue elevate this thriller above the pack." (Publishers Weekly)
"[A] haunting, disturbingly realistic portrait of the failings, organizational and personal, that opened up the skies for 9/11....[A] rising sense of sorrowful frustration...pays off in a gut punch of an ending." (Booklist)

Dick Hill was the only good thing

What disappointed you about Morning Spy Evening Spy?

Let's face it, Dick Hill is perhaps the best narrator there is. However, even he couldn't save this travesty. The story line was a little too generic, relying largely on the notoriety of UBL to bring in an interest, as opposed to actual character and plot development. It's a milquetoast variety of the Vince Flynn fanfare.
Additionally, unless you're a fan of "G-d d*mn" and "J.C." used as expletives, I would recommend you not get this book. The argument of character believability doesn't fly, there's simply entirely too much profanity, to the point that it's no longer realistic, and simply annoying. A talented writer can tell a believable and realistic story without profanity in nearly every sentence a character says. These aren't street level criminals, the characters are C.I.A. professionals.
...but any damn fool can cuss.

Has Morning Spy Evening Spy turned you off from other books in this genre?

What does Dick Hill bring to the story that you wouldn’t experience if you just read the book?

Dick Hill is, in my opinion, the most talented narrator today. I was unfamiliar with this author, and was willing to try him out simply because I knew the performance would at least be enjoyable.