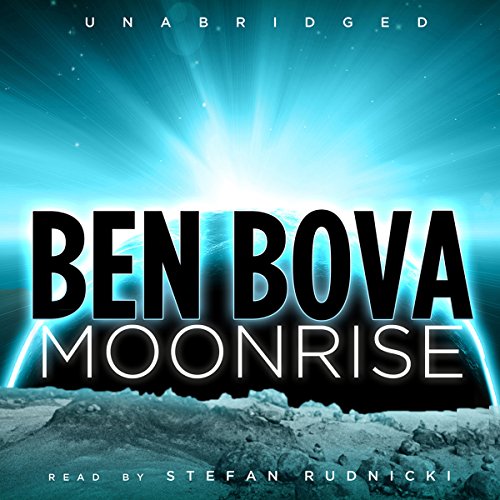 A 21st century U.S. aerospace company has developed the first permanent human settlement on the Moon, made possible by major scientific breakthroughs, particularly in the practical use of nanotechnology (microscopic machines which can build structures on the moon using lunar raw materials as well as correct damage done to the human body by illness and injury.) But conflict within the company's founding family and growing protests against the technology from radical environmentalists and religious fundamentalists on Earth put Moonbase in danger of closure. Former astronaut and brilliant visionary Paul Stavenger must prevent the project from falling into the wrong hands as a power struggle leads to murder and the near destruction of Moonbase.

©1996 Ben Bova (P)2009 Blackstone Audio, Inc.
"This exciting, realistic near-future tale is an essential purchase for sf collections." ( Library Journal)
"Bova's picture of life on the moon and the technology necessary to sustain it is highly believable." - ( Publishers Weekly)

What made the experience of listening to Moonrise the most enjoyable?

Mr. Rudnicki is one of the best - hands down! He could probably make almost any story enjoyable.

This was my first Ben Bova book. The style reminded me a lot of Orson Scott Card (or maybe OSC takes after Bova??) Anyway, between the similar style plus Rudnicki (who narrates most of OSC's books) I would often think I was listening to an OSC book. If you like OSC then you will probably like this book. If you don't like OSC, you probably won't.

Like OSC books, It seemed a bit longer than it needed to be but it did keep my interest. I learned a lot about the moon in the process, as well, which was cool. You are thrown for an unexpected little loop at the end of Part 1, and then jumps ahead in time to wrap up the story.

You will spend a lot of time on the moon and Bova does a good job building the future world of Moon Base, a space station, and various spots on Earth. The technology he describes is solid well thought out.

The best part of Moonrise is the science. It's presented in a clear, understandable manner and Bova's extrapolation of current technologies is well considered and logical. While the story is, for the most part intriguing, it was also frustrating. The problem I found was the inconsistencies of the characters. Having been introduced to them in a very detailed manner, I found myself having a hard time believing their actions. Their character as developed in the back story, did not support the actions they took.

There were also several repetitive concepts and phrases which I found distracting: the smooth walls of the crater, blasted by the microscopic granuals of lunar regolith, the wobbling jowels of Dr. Zimmerman, etc. Once was good, several times was repetitive, distracting and only served to extend a story to 18 hours, that could have been accomplished in significantly less.

I found the narration to be fairly stiff and it was sometimes difficult to tell which character was which. Some, though not all of the accents were poorly presented and inconsistent.

Would you recommend Moonrise to your friends? Why or why not?

I would perhaps recommend the book, but with reservations. The science of the fiction is solid, intriguing and compelling. The fiction that carries the science - not so much. The character development is weak and it's difficult to become attached to any of the characters or relate to them as their behavior just doesn't make sense sometimes.

Who would you have cast as narrator instead of Stefan Rudnicki?

Dick Hill comes to mind, though with a little work on his accents and character definition, Stefan Rudnicki would be greatly improved.

Could you see Moonrise being made into a movie or a TV series? Who should the stars be?

This could possibly be movie material, but would require a significantly truncated plot.

I came very close to abandoning this book after the first few hours. I'm glad I finished it, but probably won't pick up the sequel.

I don't usually go for this type of genre and was pleasantly surprised by realism of the content. It is almost futuristic-ally believable. The narration was deep, soft yet peaked my continued interest in the story line.

I'm reading all of the Grand Tour books in chronological order. This was better than Privateers, but not nearly as good as Mars or Empire Builders.

I'm writing this review having just finished Moonrise's sequel, Moonwar. I'm very glad I *did* wait, because that's the one redeeming part of this book -- the sequel. In the sequel, you're able to forget about what a relatively conscious-less person Joanna is, and ignore the fact that the New Morality is randomly introduced without pre-amble halfway through this book.

The second book is very well written, and a very exciting journey, free from the hang-ups and crutches that this book uses.

I'm uncertain if you can read Moonwar without Moonrise -- but if nothing else, listen to this book on 2x speed, so you can get through the painfully dull or unrealistic moments much faster.

For moon enthusiasts only

For those of us who were just the right age when the first astronauts stepped onto the moon, who have never stopped being spellbound by the thought of setting foot on other worlds, who still believe humanity will make it to the stars . . . this book is for us.

Bova is at his best when describing the scientific and technological aspects of a lunar colony, such as nanotechnology and the very real dangers of living on an atmosphereless rock. But he can also wax poetic when describing the lunar landscape, the hard-edged horizon, the Earth hanging overhead, the scoured rock below.

The characters and plot lines were a bit thin, and if you want a really compelling take on lunar survival, I would recommend “The Martian” by Andy Weir, but hard-core sci-fi readers will want to add Moonrise to their reading list.

[I listened to this as an audio book read by Stefan Rudnicki. I love Rudnicki’s voice, but I am glad I followed the advice of other listeners—I listened at 1.5 speed and that felt perfect.]

Another masterpiece of Ben Bova

Another book in the "grand tour" series is now done - And it was the Moonrise book.

This book in the series is the first book about the expanding solar system and the humans expansion.

The plot starts of with a murder.

The head of mastersons industies, Gregory Masterson commits what looks like a suicide. His son Greg with his wife Joanna blames Joannas new love, Paul to be the blame for the suicide if not the killer. Ths ongoing plot continues through the hole book and infests the relation between Greg and Joannas new son Doug.

In between this major plot is small subplots. The startup problems of Moonbase, a base at the Alphonsus crater at the moon.

The struggling and problematic use of nanotechnology when the "nano"-luddites make the use almost forbidden on the earth.

In this, Ben Bova also give a hash slap at "New Morality". A fundamental rise of all religious principles, Jew, Muslim, Christian, etc, that forms this new group and makes demands of all universities and people and demands more morality and fosters censorship. A bit of scary predictions of what can happens if we don't keep free speech open.

As usual Stefan Rudnicki makes and excellent narration of the book and his different voices of the different characters in the books make for a very easy and enjoyable read.

Absolutely yes, certainly if you like deep character development intertwined with interesting science. Ben Bova's writing is stellar, deep and loaded with descriptive detail. Get this book if this is your thing.

I noticed that this book was actually tied into the Mars series by Bova. In Mars 1 or 2, I can't really remember, Moonbase and the Stavenger-family were mentioned, which made it extra interesting for me to check it out. And I wasn't disappointed, because Moonrise is very similar to Mars, in the sense that Bova forges a bond between the reader and his characters, whilst going out of his way to describe the futuristic world that surrounds his aforementioned characters.

I'll be sure to get back to this book in a couple of years.

Stefan Rudnicki is one of the best Audible narrators around. His deep, rich voice makes any story interesting. It's fascinating how he can differentiate between characters without falling into over-acting. I'll listen to any book by Rudnicki.

The whole book was just a great experience. I can't really pinpoint a particular passage, I just loved everything about it. As a side note, you'll notice that this book is slightly dated technology-wise, but it's easily disregarded. Particularly funny are his mentions of

It's a pity there aren't any other reviews for this book (so far), it certainly deserves more praise. If you've read the Mars series by Ben Bova, Moonrise is a logical continuation. Bova has developed an interesting universe with Mars, the Moon and just about every other planet in our solar system. I'll be sure to pay them all a visit.

A sci-fi thriller with a paranoid protagonist. Conflict over technology with fundamentalist religious zealots driving humanity backwards. I like Ben Bova's books.

Yes I would, it was a great read.

I liked everything about his performance.

Science fiction with the emphasis on science

The strongest part of this book is the science- realist and comprehensible based on predictions of twenty years ago and still relevant now. The plot line is interesting but rather predictable and the characters somewhat stereotypical. Mr Bova knows his science but his dialogue is carved from wood. Still, interesting enough to maybe try the next in the series

I'm a Bova fan as I like the combination of SCIfi with the relationship storylines that Bova writes. This is up to his usual standard and it seems you either love or hate Rudnicki. Personally I like. If you're a SCIfi fan you're in trouble if you don't !