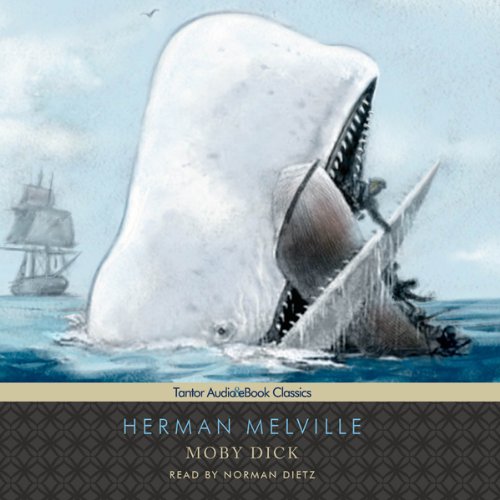 On a previous voyage, a mysterious white whale had ripped off the leg of a sea captain named Ahab. Now the crew of the Pequod, on a pursuit that features constant adventure and horrendous mishaps, must follow the mad Ahab into the abyss to satisfy his unslakeable thirst for vengeance. Narrated by the cunningly observant crew member Ishmael, Moby Dick is the tale of the hunt for the elusive, omnipotent, and ultimately mystifying white whale - Moby Dick.

On its surface, Moby Dick is a vivid documentary of life aboard a 19th-century whaler, a virtual encyclopedia of whales and whaling, replete with facts, legends, and trivia that Herman Melville had gleaned from personal experience and scores of sources. But as the quest for the whale becomes increasingly perilous, the tale works on allegorical levels, likening the whale to human greed, moral consequence, good, evil, and life itself. Who is good? The great white whale who, like Nature, asks nothing but to be left in peace? Or the bold Ahab who, like scientists, explorers, and philosophers, fearlessly probes the mysteries of the universe? Who is evil? The ferocious, man-killing sea monster? Or the revenge-obsessed madman who ignores his own better nature in his quest to kill the beast?

A different but compelling reading

James Joyce once said that if Dublin were blown off the map, it could be rebuilt, brick by brick, from "Ulysses." Herman Melville tried to do something similar here: if the Nantucket whaling industry disappeared from history, it could be reconstructed in all its particulars from "Moby Dick".

It's an incredible novel. In fact, calling it just a novel is misleading: it's part documentary, part theater, part incantation, part philosophy; partly Biblical and partly Shakespearean. The riven Ahab towers over the action, his single-minded obsession occasionally giving way to a more mundane kindness; but leading him on inexorably for all that, to the smashing, chilling, crunching, annihilating climax.

Anthony Heald has given a brilliant and well-received reading of the novel. Dietz's version isn't better (or worse), just different. He is clearly reading it, where Heald sometimes sounds like he's making it up as he goes along; but there's a beautiful rhythm to Dietz's reading, a relentless pace, one phrase after another pouring out, rising and falling until the final gasp. The only thing marring it are Dietz's idiosyncratic pronunciations of some of the words: "mariner," for example, always comes out as "mah-riner," and "Ishmael" sounds more like "Ish-me-all." (Attempts to sound New Englandish?) Both readings illuminate a different aspect of the novel. I plan to keep both and listen to both again.


I know people that lie about reading books: Ulysses, anything by Proust, Infinite Jest, Pride and Prejudice, even the very short Catcher in the Rye; the enjoyable Alice's Adventures in Wonderland; surprisingly the Harry Potter series; and understandably, the Russian tomes War and Peace and Crime and Punishment. Myself, I lied, by omission, about Moby Dick, having read the Cliffs Notes and passed the test in high school. It didn't bother my conscience that much since the Cliffs Notes were a whopping 100 plus pages, and I got an A. I did try to read the actual novel in college, then tried again with the book on cassette tapes, and finally downloaded this audio version when I joined Audible in 2009. Like Ahab soliciting the crew's support to hunt down and kill the white whale, I invited friends to bite the bullet and listen or read along with me to conquer Moby Dick. Misery loves company I thought, until about 1 hour into the recording while gardening or running, and bored near to death, I dismissed it into oblivion.

The idea of passing off Nathaniel Philbrick's "In the Heart of the Sea" as, "Yes, I've read Moby Dick," crossed my mind, again, in that first hour, looking ahead at still nearly 25 more hours dedicated. I'd seen the movie too--hell yes! I'd even seen Gregory Peck as Capt. Ahab, the man that seemed to be "carrying all the rage and hate of the entire human race." But that book taunted me from the depths of my library...it became a madness I was determined to conquer.
To all those determined, to those that have put in an hour or two and failed, to those ashamed of the lie...take heart: (and in extreme cases of resistance, as a last motivational resort, see the movie "In the Heart of the Sea" to whet your appetite)

It takes some perseverance to acclimate to Ishmael's lavishly embellished and detailed story-telling style. And having persisted beyond my previous attempts, I finally found myself somewhere passed the 1 hour mark slowly taking a liking to Mr. Melville's whale of a whale tale, likely when Queequeg entered the scene. Melville's magic, that has remained strong for over 160 yrs., was casting its spell on me. The stony Ishmael, whom lends very little of his own character to this story, is a slow sell, but a powerful and reliable narrator that tells this story better than any camera could record it. He yearns for the open sea (as do I), like Thoreau yearned for the wilderness and "all things wild." At one point (probably just few minutes passed that first hour I could never get beyond before), unwilling to share a room with even the most credible whaler in the Spouter-Inn (no vacancy) -- after finding no comfort in a wooden bench quickly shaved down by the inn-keeper to form a makeshift resting place -- Ishmael agrees to share a bed with a "cannibal heathen" returning after a night of peddling shrunken heads to morbidly curious townspeople. He then observes the not-so-savage-savage with pure wonder and innocent curiosity, forming a benevolent bond that seems the only refuge as they sail across oceans in this timeless tale.

The promise of the voyage, the intrigue and mystery started to congeal for me. Within my second hour, I pursued the story of the Pequod's final voyage with an obsession aggregated from "Jonah and the Whale" to "Jaws," and every high-seas pursuit of the aquatic leviathan in between. There are details: Holy seacow, there are details! Encyclopedic, meticulous details that I'm sure are not gathered together in any other single compendium. I pictured myself on a cross country road trip with Faulkner in the back seat of a big boat-like car, churning out tirelessly, non-stop from coast to coast, a stream of the philosophy, psychology, biology, and literature of all things whaling -- I'd suggest stops for popcorn, beef jerky, Diet Coke, sunflower seeds, and bathroom breaks along this fascinating journey.

Eventually, obviously, I honestly crossed Moby Dick off my TBR list with rows of gold stars. I was truly amazed by the quality of writing, the information, the atmosphere, the humanity and the nature, the symbology. It is a quest of a lifetime and the read of a lifetime that one day, I hope to read again. *You know...that Nike swoosh kind of looks like a whale...I think they had Moby Dick in mind when they came up with the logo. Just do it.

The good news about this particular edition of Moby Dick is that it is genuinely unabridged, that is to say it includes the Etymology and Extracts which form the introduction to the novel. These take up about an hour of reading time missing from all the other editions, so far as I can tell. They may not be central to the plot of the story, but, if you are a purist, you will want them. If the first line of your edition begins, "Call me Ishmael," it is not truly unabridged. (This explains, partially, the widely varying time differences in the various recordings).
The bad news about this edition is the narrator. There's something grating about his homespun tone and inflections. I couldn't listen to him for long and ended up buying the Anthony Heald narration, which, though it doesn't include the introductory material, is much more gracefully narrated. So, if you must have an audio edition that is truly unabridged, buy this version because there's no other choice, but if you're looking for a well-narrated novel, I'd advise against it.

I really enjoyed listening to Norman Dietz. It was the perfect blend of "reading" and "performance." I had read the book myself years ago, but feel I got more out of it by listening to his narration.

I sampled all the versions of Moby Dick available on Audible before purchasing, and feel I chose the right one for my taste. I recommend all listeners do the same, as preferences vary greatly.

it's a long haul!

Though a Herman Melville classic, it's a little long winded for an audio book! The chapters on classification of whales, while incredibly detailed for it's day, are a slog. A great adventure story, wonderful character development, an allegorical tale for all of us.

Finally finished this great classic. Voice was perfect fit to the story and t he story is amazing. Highly recommended to all.

Along drawn out listen with an anticlimactic end.