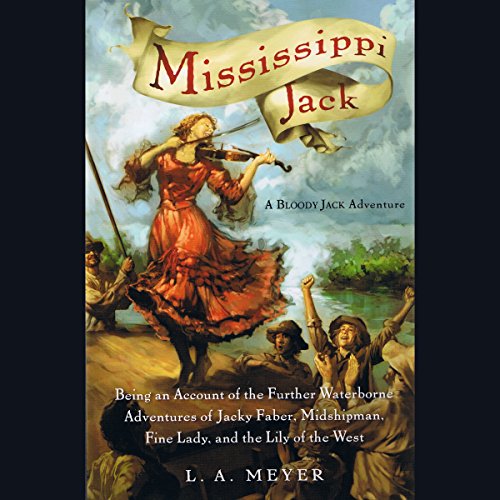 In Mississippi Jack, the fifth installment in the Bloody Jack series, the intrepid Jacky Faber, having once again eluded British authorities, heads west, hoping that no one will recognize her in the wilds of America. There she tricks the tall-tale hero Mike Fink out of his flatboat, equips it as a floating casino-showboat, and heads south to New Orleans, battling murderous bandits, British soldiers, and other scoundrels along the way.

Will Jacky's carelessness and impulsive actions ultimately cause her beloved Jaimy to be left in her wake? Bold, daring, and downright fun, Jacky Faber proves once again that with resilience and can-do spirit, she can wiggle out of any scrape...well, almost.

While I've LOVED the Bloody Jack series to date and Katherine Kellgren's performance, this wasn't one of my favorites on either account. The story was a bit too long with too many mishaps and I didn't like Ms. Kellgren's portrayal of some of Jacky's wilderness "friend" (for lack of a better word). Every time Mike Fink spoke I had to cringe just a little.

What I loved about this story, was Jaimy Fletcher's travel down the Allegheny, Ohio and Mississippi Rivers. When he was coming up with wording for the U.S.A. acronym I was absolutely doubled over in laughter. I couldn't wait to get back to Jaimy's story to hear what he came up with next. Poor Jaimy - he simply could not catch a break in this book.

If you are reading/listening to this series, you cannot skip this book. It is very good - just not my favorite.

This book is over-the-top in an Indiana Jones Temple of Doom way. It's the least believable book in the series so far. I couldn't stand listening to the characterization of Mike Fink. But actually, his characterization kind of fits the whole book to me, too big, too noisy, and just plain unbelievable. I actually laughed out loud at the preposterous nature of a big scene near the end.

Note to writer/editor: You cannot have a verbal reading of a journal entry that the person never wrote down and it was only in their mind!

I have loved all of the previous books in this series. So, I'm going to listen to one more. If it doesn't redeem the series for me, I'll stop there. Also, if they don't either consumate their relationship or break it cleanly in the next book, I'm going to be quite unhappy. Enough is enough I say.

Kellgren does it again!

I am a 40-yr old fan of this series. I read book 3, but did audio for 1,2 & 4, and let me tell you, I wish I had done it for #3 - I really felt I missed out on something! Kellgren is impossibly brilliant in her voicework and narration. If I had read book 4, I would have never heard her take on Mike Fink, and that is very scary, as it is the most annoyingly hilarious thing thus far in the series...or as funny as hearing mam'selle call Jacky "preciousssss". I now walk around saying "Well, helloooooo, preciousssssss", but no one understands.

The last of the good ones

Truthfully, this is the last of the bloody jack series that I really like after this one the stories just were not that good to me.

But they are worth listening to. The narrator of all the bloody jack stories is really great. And the author, did a good job of keeping the series alive and give g us a look at what history was line with kind of a modern prospective on it.

Part of my problem after this point is Jamie is not the best match for our Jackie, Lord Richard Allen was far better for her. And as the series continues that becomes more and more apparent.

Some of the earlier books were a bit predictable, but this one has plenty of surprises. Happily we know that Jacky will get out of each scrape because there are more books to go, but sometimes it was hard to see how she would manage this time.

If you are at this point in the series, you might like to download the free conversation between Kellgren and the author, L. A. Meyer. It doesn't give any spoilers after this point except a hint of some more places Jacky will go. He explains why music is so important in these books, and she talks about how she develops the character voices and keeps them straight.

This series is one of several I would never have found or appreciated in print. The right narrator contributes so much more than I could get by reading it myself.

Weak Link of the Series

If you're a fan, stick with it and move on to the next one, they get better again. They're formulaic and silly, but enjoyable. This particular book and the narration were the weak link in the series, I challenge anyone to not cringe while hearing the narrator voice the character of Mike Fink in this book.

Sooo Tired of the Jackie/Jamey nonsense

Just getting really tired of her keeping her "virtue" intact for her dear "Jamey"... she gets threatened with rape just about every other chapter... it's getting to be a very tiresome trope. This isn't a book about a powerful woman, but a book about how she would have to kill herself (or something to that effect) if she possibly ever "lets" herself be raped. Shame on the author. Also squaw doesn't mean a female body part, that is a myth perpetuating only through ignorance. Look up the etymological science. It means "woman" or "wife." It is still offensive because of the connotation of the word as it has been used in the past, but stop spreading stupidity.

Stop the screeching and singing!

The story was fine and as interesting as any of this series. What I could not stand was all of the yelling, screeching, crying, singing, and generally nerve jangling sounds that went along with this story. I can’t really blame the narrator because that’s the way it was written. I had to jump forward 30 seconds to a minute throughout the book. It set my teeth on edge. I love this series and reader a lot but this book is my least favorite.

Least believable of the series so far. Characterization of Mike Finn was so annoying I couldn't wait for the book to end. The relationship between Jackie and Jamie needs to finally hook up or have it's tragic end already... it's worn out. I'm hoping for better in the next book, but if the Jackie/Jamie doesn't resolve I'll be done with this author and this series. Also don't care for the constant retelling of the prior stories within the new story. Lame.

Not the best of the bunch

I have absolutely loved listening to this series, and am rooting for Jacky throughout all her adventures, regardless of where she goes. That being said, I have to say I did not enjoy this installment, mostly because of the narrator's voicing of Mike Fink, who as a character made me want to pull my hair out. I think being waterboarded might be a more cheerful experience than listening to that voice bellowing through the speakers. It was extremely distracting and to say that it was annoying may be the understatement of all time. In addition, the story seemed to languish and meander more so than the others in the series, and I had a difficult time developing empathy for the characters or their plights. I was, however, delighted to meet Simon Freeman, and would welcome seeing him in the future. Unfortunately, I have to say that throughout the book I just kept thinking, "Just get ON with it, will you?"