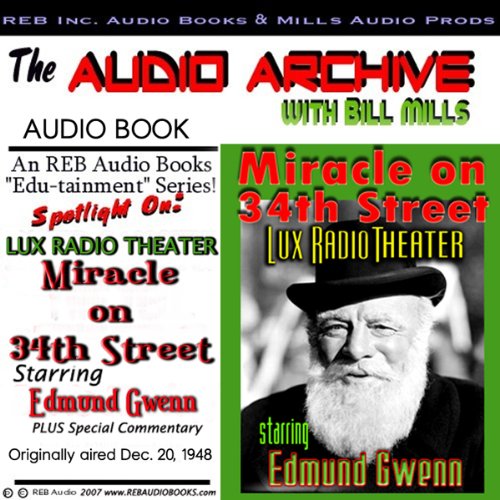 An Audio Archive special feature presentation of one of the greatest and most beloved Christmas stories: Miracle on 34th Street, starring Edmund Gwenn, Maureen O'Hara, and John Payne. This is a classic movie condensed and performed live as a one-hour radio play by The Lux Radio Theater in 1948. In the words of Lux Theater producer William Keely, "It's wrapped in a gay covering of laughter, tied with a bright ribbon of good humor, and decorated with the three sparkling stars of the 20th Century Fox picture."

Miracle on 34th Street is the story of what takes place in New York City following Macy's Thanksgiving Day Parade, as a single mother and her daughter, a lawyer, and many others are left wondering whether a department-store Santa is simply a nice old man with a big heart and a big white beard or if he is, in fact, the real Kris Kringle!

The 1947 film included the introduction of then child actress Natalie Wood. When Lux produced their Miracle on 34th Street little Natalie was unavailable to play her original part for the radio, but Maureen O'Hara, John Payne, and most importantly, Edmund Gwenn were all on hand to recreate their film roles for the microphones of the CBS Radio network and a nation of rapt radio listeners.

The Audio Archive presentation of Lux Radio Theater's Miracle on 34th Street is presented in it's entirety, including nostalgic Lux soap commercials (and instructions for using Lux soap flakes as snow for your Christmas tree!) and is preceded by a short introduction by host and old time radio fan and aficionado Bill Mills.

A Christmas classic on your device

Would you consider the audio edition of Miracle on 34th Street to be better than the print version?

I think this version was amazing as it was from radio and had the major cast due a short version of there great holiday film. So happy Audible offers these.

It's a story of believing in Christmas no matter how old you think you are.

The main players from the hit movie all but the then young Miss woods. They did a great job like in the Film

Just brought back memories of watching the movie growing up so the whole project just helped make the Holiday season even that much better.

If you never listened to Old time radio(OTR) then Please due yourself a favor and have a listen to time before the TV sat in our living rooms and allow your mind to help tell the story as they act it out with words.

So enjoyable it truly makes you believe the magic of Christmas

This is a keeper for me. Especially nice as three of the original stars performed. There really is a Santa Claus!

Listen to this every year while wrapping

This is a story we all know, but listening to the original actors is fun too.