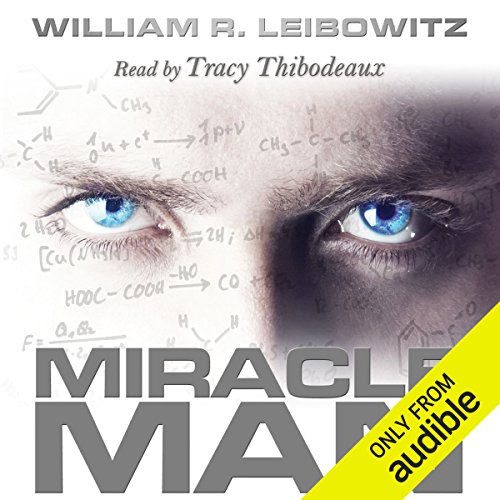 The victim of an unspeakable crime, an infant rises to become a new type of superhero. Unlike any that have come before him, he is not a fanciful creation of animators; he is real. So begins the saga of Robert James Austin, the greatest genius in human history. But where did his extraordinary intelligence come from, and why do so many want to destroy him?

Aided by two exceptional women, one of whom will become his unlikely lover, Austin struggles against abandonment and betrayal. But the forces that oppose him are more powerful than even he can understand. Robert James Austin is revered by many and reviled by some. But none can doubt that he is remarkable.

"To call this novel a 'medical thriller' would be to do it an injustice. Miracle Man is about miracles, motivations, and the ability to withstand moral and ethical temptations against all odds. Readers are treated to a plot with many twists and turns: it holds intrigue, describes compulsions and diversions, and paints a powerful picture of the search for privacy, as much as meaning. This gripping novel of psychological tension is a pick for any who want high octane action and emotionally-charged reading right up to an unexpected, gripping conclusion." ( Midwest Book Review)

What a great book. Impossible to put down.

Would you consider the audio edition of Miracle Man to be better than the print version?

No idea which is better but the audible version is really good.

Could not stop listening.

The story moved along at a fast pace and the narration was a pleasure to listen to.

From the very beginning I was hooked. Surprised because this seems to be the author's first book. He hit a home run for sure.

Take a chance and listen! I'm glad I did.

I was hooked from the beginning. The story was a nice break from my usual murder novels but there was still plenty of suspense. Bought the next book the minute I finished.

One of my favorite. I read it years ago. Listened to it on the road to get ready to read the sequel.

Awful. Could not get through it. Sophomoric writing. Did not like the narrator either. I should have read the harsher reviews and not all the glowing ones....wherever did those come from!

liked the momentum of this book. intersting story line. kept me engaged for over a week. the ending was abrupt but unexpected.

I found the voice of this reader too monotone. I felt like I was listening to a sportscaster for some reason. It just did not resonate with me. The book was just okay.

Worse book I have read this year

It was an absolute punishment to finish this book. Characters not developed. Relationships very basic.

Please, save your credit: by far the worst book I've listened to in a very long time. I don't understand why so many good reviews, perhaps from bloggers or paid reviews.

Some interesting scientific speculations, BUT ...

The only value of this book for me were some interesting and plausible ideas about the nature or causes of some diseases that continue to plague humanity and possible approaches to their cure or at least ameliorating their devastating as well as the notion that mathematics could/should become the "lingua franca" of every branch of science.
However, the plot (to the extent one can be devined) is a poor reworking of the book - and movie - "Charlie,"in which the central character follows the same developmental arc as a lab rat toward super intelligence and positive social impact only to see those powers fail and to fall back, albeit to a happier - if more banal - ending.
The two most disappointing elements are the lack of any real character development and the inability of the narrator to bring them to life. Bottom line: while this listen wasn't a total waste of time, I won't spend anymore time or money on any books written by Leibowitz or narrated by Thibodeaux.

Premise was interesting but characters way too shallow. Especially the women. From the strippers to Christina, empty placeholders.