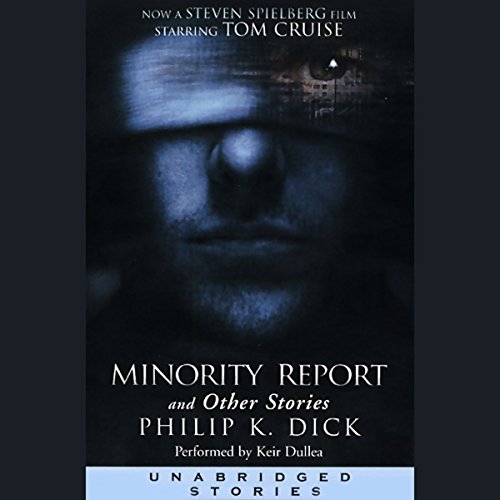 Viewed by many as the greatest science fiction writer on any planet, Philip K. Dick has written some of the most intriguing, original, and thought-provoking fiction of our time. This collection includes stories that will make you laugh, cringe...and stop and think.

In "The Minority Report," a special unit that employs those with the power of precognition to prevent crimes proves itself less than reliable. This story was the basis of the feature film Minority Report.

In, "We Can Remember It For You Wholesale," an everyguy's yearning for more exciting "memories" places him in a danger he never could have imagined. This story was the basis of the feature film Total Recall.

In "Paycheck," a mechanic who has no memory of the previous two years of his life finds that a bag of seemingly worthless and unrelated objects can actually unlock the secret of his recent past, and insure that he has a future. This story was the basis of the feature film Paycheck.

In "Second Variety," the UN's technological advances to win a global war veer out of control, threatening to destroy all of humankind. This story was the basis of the feature film Screamers.

And "The Eyes Have It" is a whimsical, laugh-out-loud play on the words of the title.

This is a really nice collection of sci-fi short stories, which have also been adapted into movies. Each shows Philip K. Dick's mind-bending ideas, albeit in a dated style. My only real complaint is it is hard to find where stories start.
FYI: 0:00:00 -- Minority Report; 1:30:14 -- We Can Remember It for You Wholesale (Total Recall); 2:23:43 -- Paycheck; 3:46:35 -- Second Variety (Screamers)

better than the movies

I really enjoyed this audiobook. The short stories of Phillip K. Dick are a fascinating glimpse of one man's vision of various futures. They are definitely quirky and very non-Hollywood. If you expect neatly wrapped up happy endings, these stories are not for you. The reader Keir Dullea is excellent. If I'm not mistaken, he is an actor who is most famous for playing Dave Bowman in 2001: A Space Odyssey. He brings the various characters to life, imbuing them with individual personalities. I highly recommend this title.

my only issue with the format of this audiobook is that i wish there was more of an obvious break in between stories. i'm frequently not really sure what i'm listening to - they don't tell you the names of the other stories, and if i miss the music in between (i'm on earphones in a loud workspace), sometimes it takes me a couple minutes to realize that i'm listening to a new one. other than that, it's very enjoyable.

This audiobook is GREAT! And it's all because of Dick's imagination. The reader is so-so (some of his characterizations bugged me) so I can't give it a 5 star rating, but the reader is the only thing that holds me back. If you wondered where great sci-fi movies like: Minority Report, Total Recall, Screamers, and Paycheck came from, here it is. Dick is the master and these shorts are great fun. My favorite was Paycheck. I haven't seen the movie but I am sure the short story is a thousand times better! Good listen!

I liked the stories but the chapters splitting them weren't didn't lineup with them. I would have liked it better if I could have skipped to certain stories but that option wasn't available because of this problem. Otherwise, it was a good collection of Sci-fi stories.

This is a fascinating look at short stories that were perverted or realized with varying degrees of success (and fidelity) by translation into movies. Most stories are quite entertaining, but dated in their "future tech" and also in the sociental attitudes implicit in Dick's writing. All in all, an enjoyable, if not deeply moving read.

For Fans of Sci-Fi Psychological Thrillers

Every story except for the final little 7 minute one is phenomenal.

The audiobook is very lazily organized though, with a completely nondescript 7 "chapters" that don't line up with the beginning and end of the short stories.

Narrator is solid. I recommend this collection to anyone who has the capacity for critical thinking and an interest in sci-fi.

This series of short stories captivated me. All of them were thought provoking and yet not too "heavy". The type of stories the old series "Twilight zone" were - always favorites of mine. After seeing the movie "Minority Report" it was especially interesting to listen to the original.

P K D I c K a quick fix. Endings are beginnings. A sharper break between stories would be appreciated.

Minority Report and Other Stories

I found the wonderful thing about this writer is he gets your mind going. I had already seen the movie Minority Report (Tom cruise) and was very impressed. The book is based on the same theme but a different story with a very different ending. If you have seen the movie you will love listening to this book - the movie will not have spoiled it for you. His stories were all entertaining educational and well worth the time spent on it.