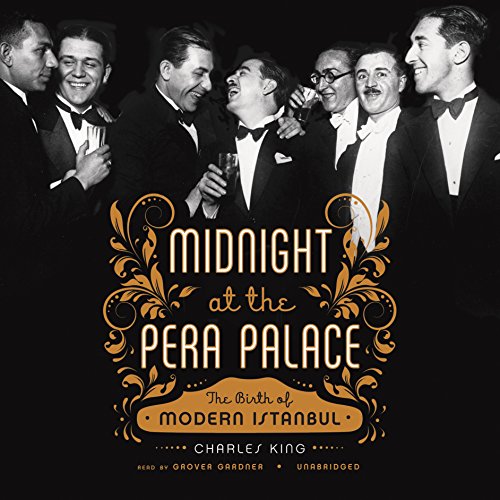 At midnight, December 31, 1925, citizens of the newly proclaimed Turkish Republic celebrated the New Year. For the first time ever, they had agreed to use a nationally unified calendar and clock.

Yet in Istanbul - an ancient crossroads and Turkey's largest city - people were looking toward an uncertain future. Never purely Turkish, Istanbul was home to generations of Greeks, Armenians, and Jews, as well as Muslims. It welcomed White Russian nobles ousted by the Russian Revolution, Bolshevik assassins on the trail of the exiled Leon Trotsky, German professors, British diplomats, and American entrepreneurs - a multicultural panoply of performers and poets, do-gooders and ne'er-do-wells. During the Second World War, thousands of Jews fleeing occupied Europe found passage through Istanbul, some with the help of the future Pope John XXIII. At the Pera Palace, Istanbul's most luxurious hotel, so many spies mingled in the lobby that the manager posted a sign asking them to relinquish their seats to paying guests.

With beguiling prose and rich character portraits, Charles King brings to life a remarkable era when a storied city stumbled into the modern world and reshaped the meaning of cosmopolitanism.

Captivating story of transition to modernity

This is not a history of a hotel, but King very cleverly uses the hotel as a lens through which to study the changes in Istanbul over the first half of the 20th century.

King presents a very thorough analysis, covering the social, political, economic, ethnic, religious and even architectural changes over the period, as well as what has survived all the changes. He neatly places these changes and continuities within the wider contexts of the old Ottoman Empire, Turkey, Europe and Asia. The book is wonderfully researched and written in an easily accessible and convincing narrative.

There IS a kernel of an interesting subject here but the writing jumps around, making the whole book confusing. Grover Gardner is a great asset but not good enough to save this account. Here, again, Audible would benefit listeners by providing us with PDF downloads of accompanying photographs if available in the print version. With a rare account of a magnificent city like Instanbul, I'm sure the author gave the reader a visual glimpse of this colorful locale, along with vintage prints of Constantinople and its transition into Instanbul.

Its the best intro to the city of istanbul, and great for fan of agatha christie

Fond of these byways in history and loved hearing about so many aspects that I was unaware. A perfect book for my 90 minute morning walks. Thank you.

Really a collection interesting rambling anecdotes barely forming a coherent whole. Interesting but not that captivating.

this is a perfect example of how to take fascinating history and make it as dull and hard to follow as possible. The narration was abominable. Every Turkish word was mispronounced in the most painful way. I had to use your willpower to finish this book.