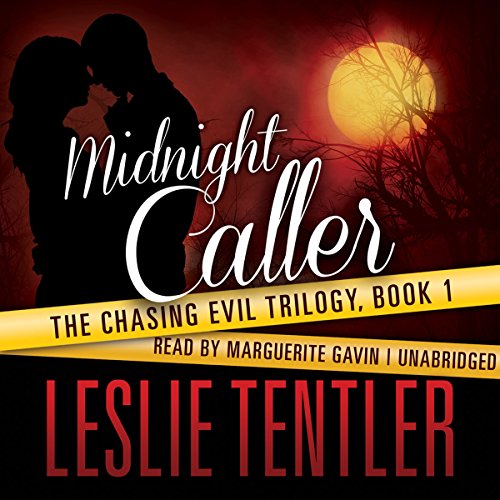 "I don’t plan to kill you…unless, of course, you force me to."

Late-night radio show psychologist Rain Sommers is used to the crazies calling in to rage from the back alleys of the French Quarter and the shadows of the bayou. But one caller’s chilling obsession with her and her long-ago murdered mother - an iconic singer beloved among the city’s goth community - has even the jaded Rain running scared as a sadistic serial killer known as the Vampire prowls New Orleans.

FBI agent Trevor Rivette is convinced her midnight caller and the killer are one and the same. As it becomes disturbingly clear that the Vampire has a sick bloodlust only Rain can satisfy, she allows Trevor to get closer and closer. He soon discovers, however, that his secretive past and troubled present are intertwined - and that he may die trying to keep Rain’s fate out of a madman's control.

Leslie Tentler worked in public relations as a writer and editor for nearly two decades. Her first manuscript won the prestigious Maggie Award of Excellence.

©2011 Leslie Tentler (P)2012 Blackstone Audio, Inc
Poliziesco Narrativa femminile Paranormale Suspense romantica Contemporaneo
Mostra di più Mostra meno
"A smooth prose style and an authentic Big Easy vibe distinguish Tentler's debut.... The shivers are worthy of a Lisa Jackson." ( Publishers Weekly)
"A romantic thriller that continually keeps you on the edge of your seat." ( Fresh Fiction)
"From the turn of the first page, Leslie Tentler hooks the reader and holds them in the palm of her hand." (Examiner.com)

Story ok but not original

For the past couple years these books seem to hit on the same set of actions. First man and woman meet and do not like each other. One, or both, are law enforcement. After animosity they end up in bed. Then woman (usually the woman) does something stupid and is kidnapped and threatened with death. In the last scene the man rushes in and saves her. Then, after both or one of them claiming they do not want a commitment, finally decide they want to be a couple.

There are variations on this theme and some are very good d/t an excellent mystery. Some fall flat. I enjoy the mystery and try to figure out 'who done it' before the end of the book.

All that being said, this book is ok. Nothing special but keeps me company. I wish the authors would ditch the hero rescuing at the end and just cut to the chase - who is the evil-doer?

Margarine Gavin is the BEST

Less supernatural than expected, but still a good experience as Margarite Gavin is one of the best readers out there. I prefer her fantasy/supernatural voiceovers. This piece could move a little slow, but the New Orleans background creates a texture and character herself.

Author has no idea of what New Orleans is like other than what can be found on a map! It is almost unheard of to find kudzu in the areas described. As for the narrator, no research was done as to pronunciation of local names and terms. And the accents were all wrong. No southern twang or Cajun accents in ew Orleans. I will continue to read the series as I loved the characters and story. Hopefully I won’t be able to pick apart other locales. The author should stick to the familiar or not try to change the REAL New Orleans.

A smarter leading lady. I have now read all three of the books in this series - my 2 quibbles are the lack of real passion between the main characters - or - the believability of it. And in all three of these books the leading female character has 2 or three instances of completely too stupid to live moments where she puts herself in danger after significant threats have already been made. I find that a very annoying trait in someone who should have more sense.

The storyline is well written with a good plot. Just need a smarter leading lady...

Where does Midnight Caller rank among all the audiobooks you’ve listened to so far?

This is the 1st of this type book I've tried. The romance had a weak in foundation. I enjoyed it and l intend to listen to the entire series Overall rating 4.5, not a 4 but not a 5.

What does Marguerite Gavin bring to the story that you wouldn’t experience if you just read the book?

Her narration is quite good but when i coms to character voices..... I'm just curious why they would have a woman narrate a book that has only 2 female characters. I can't be sure it really could have ben done better by a male narrator. Rain's voice was a wee bit breathy on top of the New Orleans accent, Trevor's a bit forced to be deep. Rated a 4.5, not a 4 but not a 5.

The story line started off great. Question:Who was the doctor? Did he really have relations with Desiree? They didn't even know at the end!!!

poorly written is a nice description

I suffered through this drivel until "faggoty pink" and then gave up. How does one become a published author when it is this bad?!

I enjoyed this book, the only thing I had a problem with was the readers pronunciation of words such as Marigny being that I am from New Orleans.

slow, boring. hard to stay in. person reading was great. the only thing that kept me listening.

This was a good book for a rainy day. The storyline keeps your interest but it's not one that has you on the edge of your seat or unable to put it down. The narrator did a wonderful job...very pleasant to listen to

Sorry I can't comment on the story. Within 2 mins of listening to the awful narrator I deleted the whole trilogy. Why they have to put on the awful voices is past me

Very US in its context so less suitable for an international audience.
The medical components are irritatingly implausible.

Lots of suspense, twists and turns from the very beginning as well as credible and interesting characters and relationships.

nice characters, good plot, but not overly tasking, in a good way, a good 'lo' read