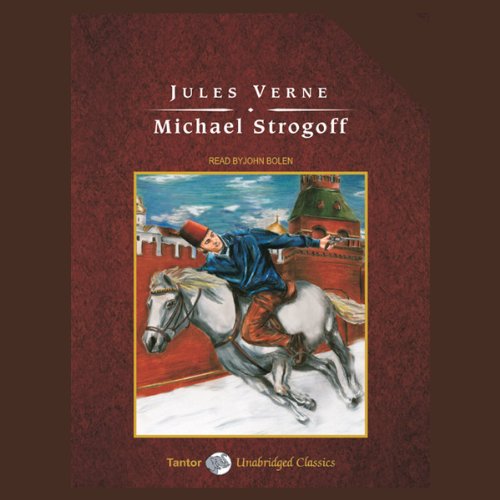 In this 1876 "Mission Impossible" tale of intrigue set in Russia, a traitor has inspired the fierce Feofar Khan to invade Siberia and foment a rebellion. A sinister plot to assassinate the Czar's brother, the Grand Duke, is discovered but all telegraph lines have been cut.

Only one of the Czar's couriers is qualified to handle the dangerous and arduous mission to warn the Siberian Governor General of the impending invasion...Michael Strogoff.

If Stephen Hawking narrated this story it would be only marginally less emotional, and only slightly more mechanical than that of John Bolens. I struggled through this story to find to my absolute horror that this "narrator" had butchered a worthwile classic. Vernes knowledge of the subject matter seems remarkable when it is considered that at the time this story was written how little much "fact" can be found in the novels of his popular contemporaries. A corker of a yarn as well so do get the book, but PLEASE, keep away from this recording!

So bad that a certain grandeur creeps in

This may be a wonderful book, but the reading was so awful I couldn't concentrate on the content and gave up after about an hour or two. The reader does all of the dialogue (and there is a lot of it) in an absurdly exaggerated Russian accent. At first it was funny, but it got old fast. Don't waste your money on this one.

What would have made Michael Strogoff better?

Man it is so hard to follow the story line while trying to ignore the idiotic interprtation of Russian Accents attempted by this awful reader. It actually sounds like he is taking it as a joke and having a laugh at my expense. The alternative, him actually thinking he is nailing the voice performance, is even scarier.

What character would you cut from Michael Strogoff?

Did any one stop once while this guy was recording and ask themselves, do we really want to ruin such an amazing novel???

Not much to say about the book. It is considered one of the best works of Vernes. My problem is with the narration. It does not sound like a human at all. I can only describe it like the voice from very old documentaries (early '80s). It is boring, monotonous and tiring to the ears.