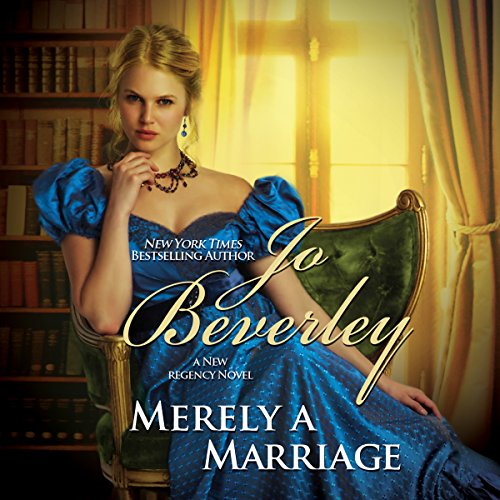 Lady Ariana Boxstall's brother, Norris, is a strapping young man, but he's happily unmarried and childless. Pestered by his sister, Norris agrees to take a wife on one condition: that Ariana take a husband first. Although she realizes she risks spending a lifetime in a loveless marriage, for the sake of her own family's legacy, Ariana accepts his challenge.

When the Earl of Kynaston met Ariana eight years ago, he broke her heart. Since then, his own heart has been broken, and he's sworn off love...until he sees Ariana all grown-up, and then his resolve is threatened. Could Ariana's bargain with Norris actually lead her to happiness? With real love on the line, she must win over the one man who refuses to be had.

It took a few minutes to hear the tale, or rather to catch the rhythm of the narrator as she was quite speedy in her delivery yet not enough so to be able to slow down the playback. Once that was achieved she did an excellent performance of a very enjoyable book.

As much as I love Jo Beverley books and I have a lot of them, I can't give this one a thumbs up. I felt that this story jumped all over and none of the characters were full developed or maybe too much. Can't quite pinpoint what the heck is going on. I wanted to slap Ariana's face and wring her neck. I thought she was judgmental and overbearing. And I couldn't believe all her anxieties were because Princess Charlotte died in childbirth. Please spare me. I felt so bad for the Earl of Kynaston. He got the bad end of the deal. She never let up on him. Even at the end. Sorry.

A very cute and sweet story. I loved it and am sure you will too.

Could not keep my attention and a”0” on the steamy scale. That wouldn’t even matter if I enjoyed the story (which I didn’t) Didn’t even care for the hero. No more Jo Beverly for me.

Was hoping it would get better..

Pride and Prejudice is one of my favorites, but I found the similarities here to be annoying. The storyline was so predictable that, mixed with the length, I was bored silly.

Did someone else actually write this book?

I love Jo Beverley's books and have eagerly awaited each new release over the years. I was saddened at her death last year and looked forward to reading this book, particularly as its her last. what a pity then that it is to put it finely just awful. The first chapter was good and the heroine looked as if she was going to become an interesting character. The H also looked interesting but what a disappointment. Both characters were shallow and wooden without the least spark. This whole book is so lacking in the wit and charm that is characteristic of Jo Beverley that I wonder if having been started by Jo, it was finished by someone else. This is such a disappointment but at least I have her other books to remember her by.