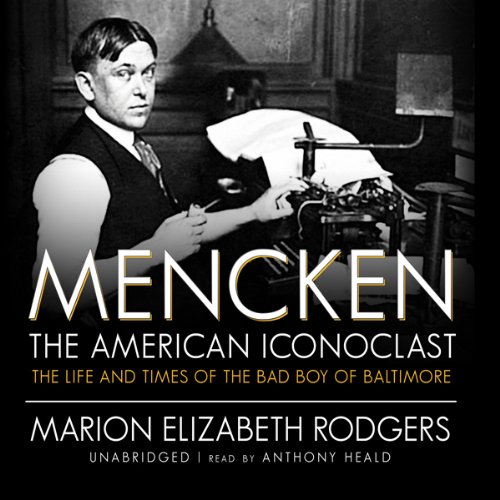 H. L. Mencken, the 20th century's greatest newspaper journalist, a famous wit, and a fearless iconoclast, fought for civil liberties and free speech yet held paradoxical views of minorities and was conflicted as a German-American during World War II.

Marion Rodgers frames the public man and the private man within the context of his era, and covers the many love affairs that made him known as "The German Valentino," as well as his happy marriage at age 50 to Sarah Haardt, and his pivotal role in introducing James Joyce, F. Scott Fitzgerald, and Langston Hughes to the American literary scene.

"A superb study of the life of the cigar-chomping controversialist, civil libertarian and muckraker who remains the patron saint of journalists." (Kirkus Reviews)
"Drawing on research in more than 60 archives (including previously unseen private collections in the U.S. and in Germany), exclusive interviews with Mencken's friends and his love letters, this is a meticulous portrait of one of the most original and complicated men in American letters." (Publishers Weekly)

Definitive and Holistic Biography of Mencken

Marion Elizabeth Rogers masterfully wove an engaging and important story with pure historic and academic fact, and created an attractive read - a feat almost never accomplished and one of which Mencken would have been impressed. Rogers told the entire Mencken story, careful to avoid leaning too far too the right or the left, and never concluding the character of the man. This was the real Menken - a somewhat "racist" defender of civil rights, a "sexist" professional mentor to women, an American patriot "apologist" of Germany during the wars, and a defender and critic of the press. He was not an enigma... he was a real human. This biography should be required reading for young people today. There is much to love and loathe about Mencken... as there is with all of us. Just try to label him. You can't. Just admire his craft., and Marion Rogers' ability to share it.

Wonderfully written and performed, along with a fascinating subject makes this a must for everyone.

There is nothing really wrong with the book, if you want to follow HL around day-by-day, year-after-year. But the life of a journalist (and typically of most famous authors ... Hemingway excepted perhaps) is not all that interesting. I found that my interest in Mencken flagged about halfway through the book and, had I had a paperbound version, I might have skimmed through the rest ... something that is hard to do with audio.

The book is well-written and well-narrated. That is in its favor.

Some biographers of Mencken never completely warm up to his candid and belittling prose, and it shows. However, Marion Rodgers first grew to know him through his tender letters to his future wife, Sara. Discovered in storage at Goucher College, they became her first book on Mencken. Intimately knowing that tender side, she was able to write a more credible and entertaining biography. The situation is sort of like having a current friend meet a friend you knew closely years ago. You want them also to be friends but your current friend finds your older friend to be self-absorbed, crude and unappealing. You say to your newer friend, "Yes, perhaps on the surface, but if you only knew my old friend better, you would recognize that he (or she) is a dear and caring person inside." With some of the Mencken biographers, I have had a desire to say something just like that. With Ms. Rodgers, one knows that, while she is willing to accept and criticize him for all of his many faults, she also knows his softer side and, hence, was able to write an unusually balanced and nuanced biography. It is the best and I have read them all. Well narrated as well.

The Great Contrarian and Skeptic

I've always admired Mencken for his writing, there was a lot I didn't know, and this filled it in. I was surprised at his rise - the author kind of made it matter of fact. I don't know what I would change, he was, after all, a reporter, not responsible for anything or to anyone, necessarily. He was a thorn in the side, as a good member of the press should be.

The Sound Editing Was Non-Existent

Or perhaps it was too heavily edited. Hard to say. Each chapter heading sounded so mechanical, one has to wonder if that effect was what the editor wanted. Each session change included an alteration in ambient sound and voice tone. Luckily the story of the life of HL Menkin was interesting enough to keep me listening all by itself.

Here is man who lead a remarkable life but the book is prosaic and tedious. It's hard to know if it was the writing or the reading or both. I didn't finish it.