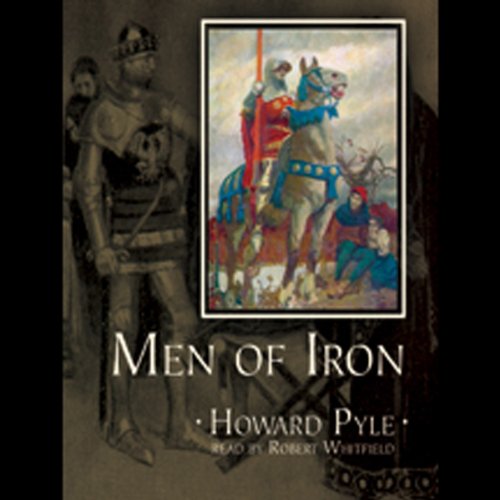 This is a story of the days of chivalry in England and of young Myles Falworth, son of a lord unjustly disgraced for treason, who was forced to make his fortune as best he might in the days when men seemed made of iron. How he entered the service of a powerful lord, rose to knighthood, defeated his father's old enemy in thrilling combat, and at last won the friendship of the king is told against a background of the dangerous times of the 14th century that makes them live again.
(P)2003 Blackstone Audiobooks

A great story for younger listeners

This is a book about a 15-year old boy who becomes a squire and, eventually, a knight. It was exciting to see him grow and mature. The vocabulary was a bit advanced for the modern teenager. However they can identify with the struggles that the hero goes through with hazing by older boys, secret hideaways with his friends, chaste romance with a young lady who is the daughter of the Earl, who is far above his "station" in life. Throughout the story, the young man behaves honorably and it shows how godly character is rewarded despite great struggles. I would recommend it as a stepping stone for those readers who will go on to more mature stories of knights and ladies.

I enjoyed Robert Whitfield’s narration of “Scaramouche” and “Captain Blood” so much that I got this book as well.

The narration is as good as those others, but the audio quality isn’t. Added to that, I noticed some flaws with the downloaded book. Initially, chapter 16 was missing entirely. I called the problem to the attention of customer service and it seems to be repaired now, but the missing chapter detracted from the enjoyment of the story. As it turned out, that chapter is not central to the plot.

This is an enjoyable story for anyone older than 15. Children younger than that will probably have trouble with some of the words, but it’s still an easily understood story, with only a few excursions away from the main plot.

The story’s central character is Miles, a young man studying to be a knight. Honor is a central concept of the story.

I am waaaaay past childhood and enjoyed this book, but I think it would be more suited for boys in their teens. I don’t think that girls would enjoy it as much boys would, although I should leave that issue open until we get a woman’s opinion.

In spite of the technical flaws, I rate it at 4 stars.

Both my 12-year-old son and I loved this book. He is dyslexic and does not gravitate toward books at all. It was an unexpected pleasure to hear him say, "Whoa! That was awesome!"
There is some nice character development as Myles ages, plenty of fighting scenes, a strong sense of right and wrong, and even a little romance. I wish that the books published more recently were as wholesome as this!

One of the best books

One of the reviews said this book would not interest girls/women. Well the 1st time I read this book I was a 12 year old girl lol. And it became my favorite. Now at 30 years old I got to have it read to me and I must say it was wonderful! The narrator Robert does a great job lol except when he does the voices of The two young ladies. I laughed soo hard every time. He has such a nice deep voice but then he goes high pitch and it’s hilarious. I have always loved time pieces and history so if u love history wither u are male or female. I do believe u will enjoy reading or listening to this book. I also read this book out loud to my dad for 11 hrs straight on a long drive. It made time go by so fast and my dad loved it. That was before auto-books lol

One of the best books I've heard

An excellent medieval story with a good plot, cast, and moral. It was certainly exciting to listen to, but it lacked the heartgripping breathtaking awe of a truly knife-edge story. However, the book is appropriately paced and no time is wasted in uninteresting description. As to action, there is plenty....no less than 4 battles occur described. Adventure is more lacking as most of the book takes place indoors or at the castle. Romance is minimal....more or less summed up; mentioned only a few times. Very safe and appropriate read for most ages!

Well written story, that carries honor. Written over 100 year ago about valor and justice, that still can teach all readers. Timeless.

This was such a wonderful listen, and rivals the best if any of G.A. Hentes books!

A really good story. Didn’t realize it was one of the classics until the narrator pointed out it was written decades ago. Plot and narration were excellent.

I enjoyed this book as a young man. And I've enjoyed it even more as a grown man.

This is a wonderful tale that is very captivating! The narrator also does a fabulous job with the characters. A must for all children but adults will equally enjoy it!