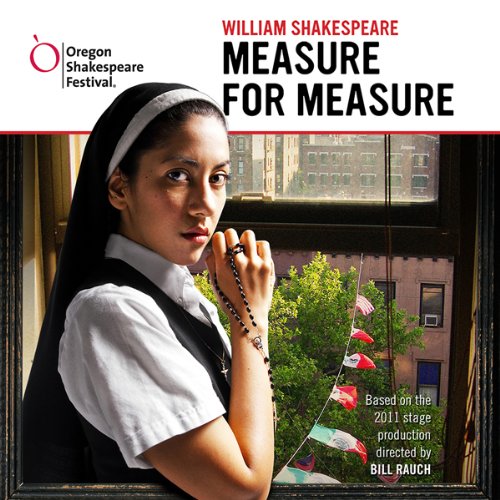 Who legislates morality? The duke’s authoritarian deputy, Angelo, is hell-bent on stamping out moral decay. He reactivates outdated draconian laws and aims his arrogant crosshairs at a young man whose fiancée is pregnant, sentencing him to death. Angelo is sternly incorruptible—until he meets Isabela, a beautiful religious novice whose desirability arouses him.

Flavored with live music by the mariachi band Las Colibri, this vigorous, modern production of Shakespeare’s play reveals what can happen when sex, religion, and politics collide.

Public Domain (P)2012 Blackstone Audio, Inc.
"[Artistic Director Bill Rauch] knows his business, and this smart, swift, refreshingly unpredictable Measure is one of his finest efforts yet. Not only is every detail of the transposition from Vienna circa 1600 to corporate America circa 1970 worked out with rigorous comic logic, but the cast is fabulously good." ( Wall Street Journal)

The Oregon Shakespeare Festival and Blackstone Audio have joined forces to give us another rousing production of Shakespeare. (Their earlier production, of "Hamlet," is one of the more compelling productions of that play available on Audible.) The audio production is based on an OSF stage production from 2011.

Some will object to the updating. This production has a strong Latino flavor, with mariachi music and bits and pieces of Spanish dialogue scattered throughout the play. There are electric buzzers, intercoms, sliding gates, and car horns. That kind of thing has never bothered me as long as the production remains true to the basic issues in the play and the truth of the characters; and that's certainly the case here. (If the BBC can set their audio production of "Julius Caesar" in Mussolini's Italy, why not this?) The sound engineers have created a completely convincing, lived-in world.

The production is helped by strong performances from Anthony Heald as the Duke and Stephanie Beatriz as Isabella. The Duke is often portrayed as a kind of brooding, mysterious presence, but Heald plays him as slightly vulnerable and often uncertain, even frantic, about what needs to happen next. Nothing quite makes up for the cruel trick he plays on Isabella - letting her believe her brother has been executed, when he hasn't been, in order to test her mettle - but that's the way Shakespeare wrote it.

The main disappointment, for me, was in the "comic relief." Lucio and his cronies come off a bit flat against the lively background. A minor flaw in an otherwise excellent piece of work. Looking forward to more OSF productions on audio!