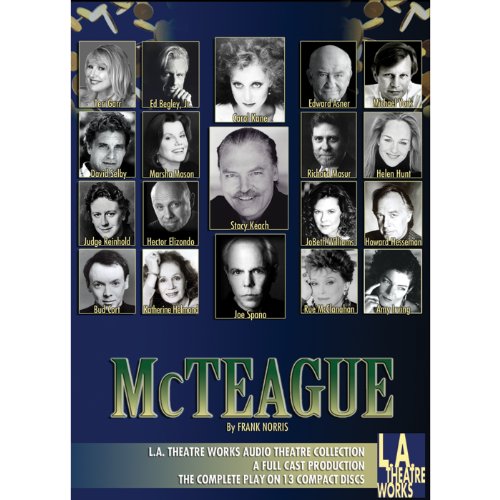 The refined nature of the story at the start of this production is a far cry from the tale of greed and revenge it becomes at the end. This LATW audio presentation is over fifteen years old and shows its age with the constant restating of the title in the oddest places, along with the use of too many harsh musical chords. However, the story of a dentist and his wife in 1899 San Francisco remains compelling. Stacy Keach, Carol Kane, and Joe Spano head the all-star cast that includes Edward Asner, Hector Elizondo, Katherine Helmond, Helen Hunt, Rue McClanahan, and Michael York - among others. The characterizations are solid, and the accents convincing. As with any good melodrama, once you begin listening, you won't be able to stop.

Hard to imagine a more compelling, engaging, immersive experience of this novel then the one presented here.

I have listened to many, many audiobooks, and I feel privileged to have been able to enjoy such an unbelievably stellar cast bringing this novel to life. It's really a new way to read and listen. I wish every book had this sort of treatment to realize it's full potential in conveying it's ideas, historical 'time & place' and ambience to new audiences. Beyond the incredible story, It makes history come to life. I have heard other commenters mention their irritation with the repeating introductions, as this was originally a radio serial type show, but it's a small quibble compared to the overwhelming magnificence of the production. It's like the graphic novel of audiobooks: Accessible, vivid, moving, transcendent, I could go on and on.
I intend to listen to every LA TheatreWorks piece that I can get my hands on. I had listened to Sinclair Lewis' "Babbitt" just before this, and it's equally good.
Again, what a privilege!

I liked the melodramatic flourishes of McTeague and his fellow rogues. The naturalism of Frank Norris comes off very strong here, and the narrative feels very dated. That is its strength, as it captures the down and outs of S.F. well, but it's repetitious and heavy-handed.

Would you recommend McTeague (Dramatized) to your friends? Why or why not?

It's probably more entertaining to hear the novel dramatized by an enthusiastic cast. But you need patience, for at eleven-plus hours the plot goes on and on, wearing out its welcome.

I liked the L.A. Theater Works' "Babbitt," done in similar form by a cast of (as of the late 1980s) respected actors. Sinclair Lewis' was a bit more skilled at narrative than Frank Norris, but the social message type of novel both men favored is suitable for such radio ensembles.

Was McTeague (Dramatized) worth the listening time?

It was fun, as I chose it for a drive across the California desert. Let's just say it remains in The City for most of its running time, as I cannot give away any plot spoilers. It's a period piece I always meant to read, and hearing it kept me entertained despite repetitious prose.

Perhaps this was published as a serial? The novel keeps repeating the same phrases for certain characters, and passages verbatim or near it come again to remind readers of the action or the characters. Still, for all its moustache-twirling menace, it's a reminder of the harsher conditions endured by ordinary men and women in urban California, no romance!

Thanks for making this novel come to life! I especially enjoyed the choice of narrators for McTeague and Trina - what perfect voices for their parts. Well cast, bravo!

This was a big surprise.

CLAP...CLAP...CLAP...Well done! Great story and very well performed, I wasn't expecting something so brilliant! I will be listening to this one over and over again!

a vivid hyperbolic tale focussed on folly of greed and still yet more greed. Helpful if familiar with novel itself, and thus prepared to enjoy this rich dramatized version that is true to story with only a few hours less enjoyment timewise and performed very well.

Incredibly annoying recitation of the author (2 times at the beginning of each part) along with the theater company and names of all the cast and characters at the beginning of each part. And then a repeat of the ending of the last part. Annoying sound effects (screaming and yelling). Too many narrators, switching from voice to voice constantly. What were they thinking?
It had moments, but one had to wade through much tedium to get to them.