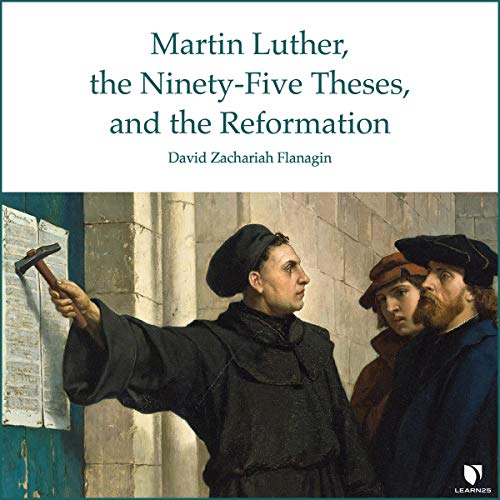 Martin Luther, the Ninety-Five Theses, and the Reformation

In 1517, Martin Luther changed the face of Christianity - and the Western world - with the 95 Theses. Now, award-winning professor David Zachariah Flanagin provides an in-depth look into the man who set Protestant Christianity in motion.

Although he remains the most famous, Luther was by no means the first or last Christian reformer. Understanding his unique importance means situating him in the context of the larger story of church reform.

Why did indulgences become the defining issue of the Protestant Reformation? This masterful nine-lecture audio course introduces you to Luther’s life, late-medieval theology and politics, and the ideas that sparked a revolution. With Prof. Zachariah, you’ll explore the three theological pillars of Luther’s thought and the Protestant tradition: justification by grace through faith alone, sola Scriptura (Scripture alone), and the priesthood of all believers. After gaining a deep understanding of these concepts, you’ll see how they differ from Catholic ideas. Finally, you’ll explore the conflicts among various reformers that were often just as contentious as those between Catholics and Protestants.

We often think of the Reformation as a matter of Catholics versus Protestants, but the truth is much more nuanced and interesting. As you consider Luther’s context and ideas, you will transform your understanding of Christian history. Known for his engaging and erudite lectures, Prof. Zachariah brings Luther and the complexities of his historical moment to life.

excellent I highly recommended it

I was raised Catholic and later my life became a Protestant. yet I really knew very little about the Protestant Reformation this book is excellent and the presentation is also excellent.

The most important aspects of the Reformation in a series of short lectures, perfect for listening on the commute or at the start of your day. Very informative, no waffle.

very well presented. the interpretation is first class and the listeners interest is kept throughout